How to Land a Trophy Striper on the Fly

Team up for huge stripers this fall 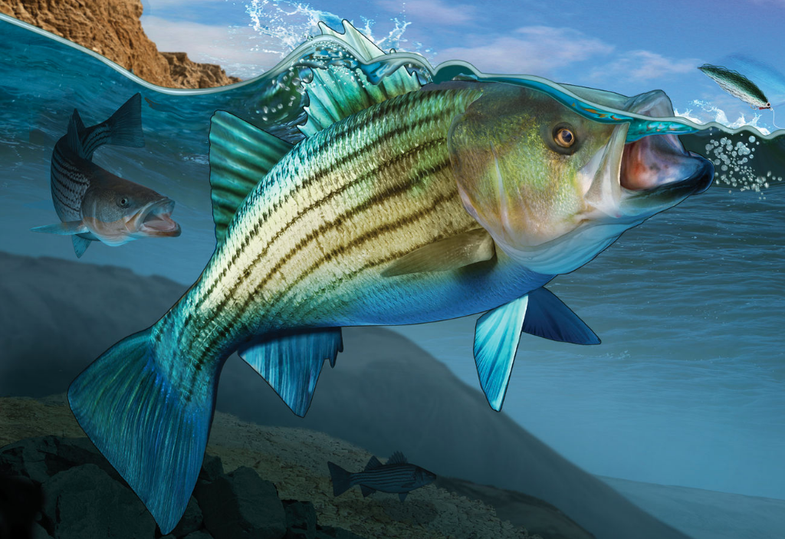 Throwing little Clouser Minnows to pods of schoolie stripers busting on the surface is easy. Getting a giant Deceiver in the face of a 30-plus-pounder—and then getting the fish to take a shot—is a whole other game. You may get lucky when big bass are trashing a school of big bait, such as menhaden. Quite often, however, the fish are so keyed on livies that it’s very hard to get them to peel off on a fly. You’ll have a better shot picking a location where you know a few bass are holding, and then teaming up with a buddy to get a cow fired up and within casting range of a meaty fly pattern. Here’s how to execute the bait and switch.

Short Game Even though you can bomb the topwater lure a mile, remember that you need to get the fish within roughly 30 feet for the fly angler. A striper that moves at the end of a 70-foot cast may not follow long enough to close the distance. Instead of casting long, position the boat so you can drop your topwater into the target area with a 40- to 50-foot cast.

Change Up The second the fly lands, the angler retrieving the top­water lure needs to rip it away quickly. The fly angler should work aggressively, forcing the fly to dart in short pops on the very first strips. If the fish refuses, try stopping and letting the fly fall. Sometimes a striper will mistake this for a wounded fish and swing back around, hitting as the fly drops or on the first slight twitch.

Get Loud Eight- to 10-inch Spook-style topwater lures that push lots of water and make a loud clacking sound are arguably the most popular for the fly bait and switch. Remove all the hooks and work the lure aggressively without pausing. The idea is to get the fish fired up and chasing without giving it time to study the offering and turn away.

At The Ready As shots pop up fast, the fly angler should have plenty of line stripped out on the deck and the fly wet before the first cast with the topwater lure is made. Watch for anything from hits on the lure to slight boils behind it that could hint at a tracking striper. Start false casting at the first sign of a fish, and lay out the second you can drop the fly next to or just behind the topwater.

Spot Lock Channel edges, current rips, jetty tips, boulder fields, and troughs along the beach are all places big stripers will use to ambush bait. Ideally, you’ll want to have a milk run of spots you can hit in a single outing. Most of the time, a bass will show itself within the first three casts to a likely holding point. If nothing boils the lure within a few minutes, move on.