How to Modify Lures and Bait Rigs for Largemouth Bass 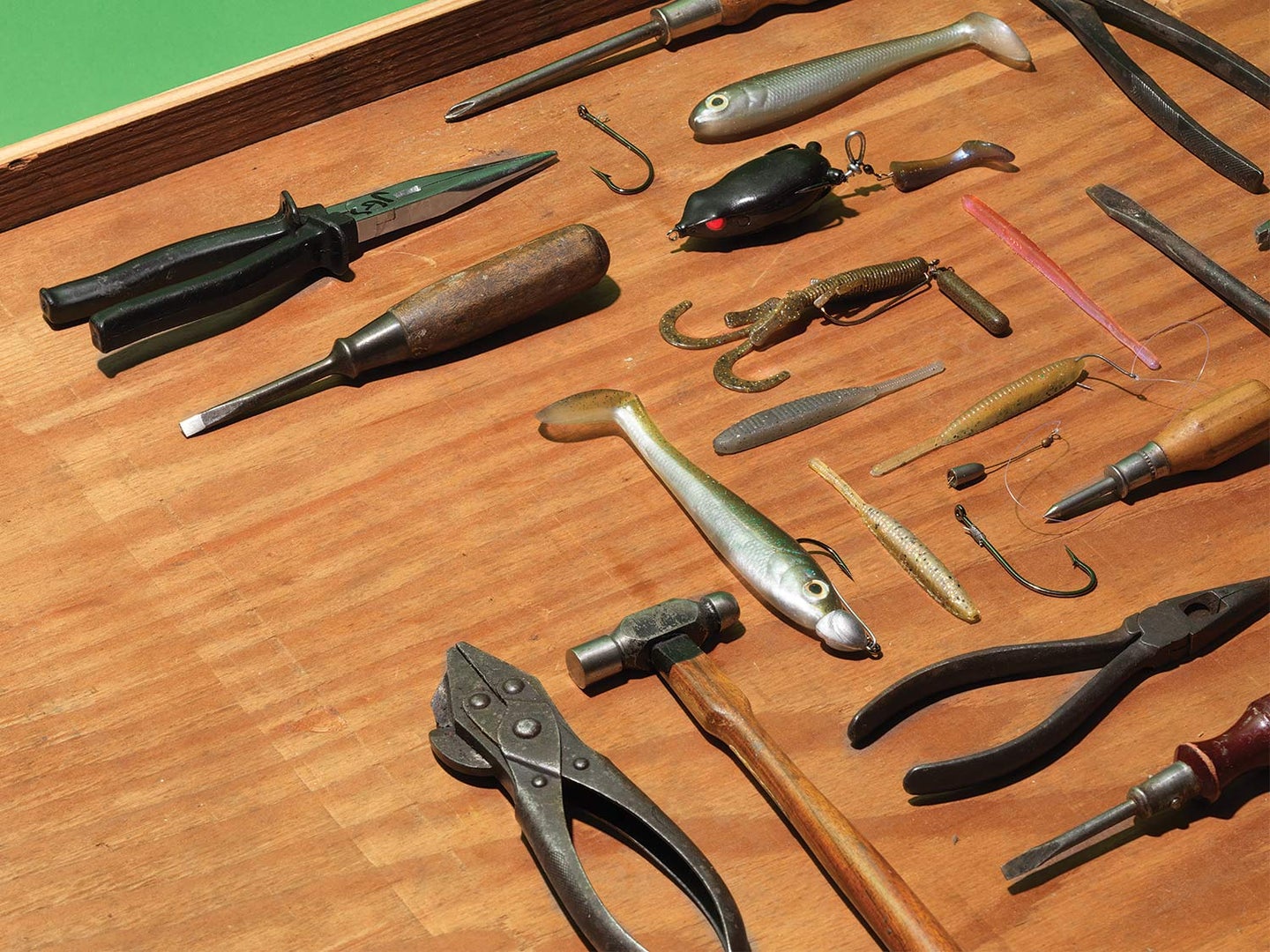 The drive to modify baits and rigs is strong for many anglers, which comes as no surprise. Any­thing we can do to achieve some kind of edge on the water or present something with better than out-of-the-box performance is worth a shot, even if it only leads to one or two more bites. Some tinker because they’ve genuinely come up with better or smarter mousetraps, while others do it simply for the personal satisfaction of fooling a fish with something they ­devised. Both are perfectly sound reasons to toil away in the garage. And it’s fair to say that no group of anglers spends more time garage-tinkering than professional bass anglers, because for them, any edge can spell the difference between a big payday and being miles from the money. We tracked down four tinkering pros to get the details behind some of their best—yet very easy and inexpensive—lure and rig mods. What they all have in common is that they’ll not only help you stick more big largemouths and smallmouths this summer, but they’ll also help you save money in lost lures and make you more efficient on the water.

A few years ago, the Teckel Sprinker introduced a new twist on a classic topwater frog—a rotating boot tail that creates a buzzing commotion intended to boost the bait’s appeal. Other lure companies have followed suit, but Tennessee bass pro Michael Neal has developed an at-home method for adding the same aft attraction to any hollow-body frog.

Neal starts by cutting off the fringed legs of his frog to eliminate potential tangling. Next, he’ll push the body forward so he can access the back end of the line tie where it joins to the frog’s double hooks. Bending a crook in the end of a 6-inch piece of spinnerbait wire, Neal links it to the line tie so it lies parallel to the hooks. With the frog’s body slid back into place and hooks properly repositioned, Neal bends the wire upward at a 45-degree angle so it lines up between the hooks. He then slides a small barrel swivel onto a loop he creates in the wire arm about an inch behind the frog, and then closes the loop with a couple of wire wraps around the standing end. The loop should be even with the frog’s back.

The swivel’s opposite end carries a screw-in bait keeper. Neal uses it to hold the back half of a 41⁄4-inch Big Bite Baits Cane Thumper, but you can experiment with any soft-plastic swimbait tails you like. Properly aligned, the trailer rides high in the water, so every tug and twitch creates a splashy display.

When you’re rigging a frog this way, keep in mind that it’s easy to inadvertently pull the line tie through the frog’s body. Because the former dangles loosely from the eye of the frog’s double hook, trying to force it back into place can become an exercise in futility. An easy solution is to modify your frog while it’s tied securely to an outfit spooled with braid. This allows you to easily pull the line tie back into position. Also, when you’re creating the trailer arm, a 6-inch piece of wire will yield some scrap, but a longer piece is easier to bend and wrap than a shorter piece. Finally, keep the arm close to the frog; otherwise, you’ll risk short strikes.

2. The Punch-Shot and Jig Rigs

Traditional Texas rigs and punch rigs employ nose weights to escort soft-plastic baits to the bottom—often through heavy cover—as a single unit. A drop-shot rig holds its bait well above the weight. All of these promote castability and ensure a weight-forward vertical fall while delivering a horizontal bait posture on the bottom. The key difference is the weight’s proximity to the hook, and Virginia bass pro John Crews has figured out how to combine the potency of both rigs with his homemade punch-shot rig and its close cousin, the jig rig.

Starting with the punch shot, Crews cuts a 3-inch piece of piano wire and bends an open loop that slips onto the eye of a Gamakatsu Extra Wide Gap hook, sized appropriately for the bait he’s using. Closing that loop creates a dropper stem that slips through the center of one or more weights, which he keeps from slipping off the stem by bending the terminal end upward. Adding a split ring to the hook eye, and then adding a small swivel to the split ring, creates a line tie that won’t impede the hook’s free-swinging motion. Crews’ jig rig follows the same principle as the punch shot, only instead of suspending the weight on a wire stem, he hangs a cylinder weight with a thin line tie eye directly from the split ring.

Crews prefers the punch shot for fishing in and around grass and likes the jig rig for working rocky bottom. One of the key benefits over a short-leader drop shot is that neither of these rigs will collapse on a slack line. Also, while a Texas rig’s downward posture puts your line and knot next to rough and jagged bottom elements like shell beds, the punch-shot and jig rigs allow you to fish a bait near the bottom with minimal concern over line abrasion or cutoffs. Both rigs accommodate an array of weight configurations to fit the depth and habitat you’re targeting. In heavy vegetation, a pair of worm weights positioned with the wide ends facing one another facilitate smooth entry and exit. To ramp up the auditory appeal, place a brass bead between the weights. For a rock or gravel bottom, Crews switches to a football weight for its classic rumbling, snag-resistant presentation.

Minimizing two common frustrations was veteran bass pro Larry Nixon’s goal for integrating a deceptively simple piece of terminal tackle into his drop-shot rig. Several years ago, when drop shots first gained a footing in mainstream bass fishing, Nixon noticed he was losing the expensive specialty weights in two vexing scenarios. The first was to rock snags that, no matter how he tried moving the boat around them, simply would not pop free. The second was when leaping fish imparted excessive pressure on the tag end of his leader that was held in the weight’s tension clip.

Nixon found the solution to weight loss when he came across Bass Pro Shops XPS drop-shot wire stems. Each 11⁄2-inch semirigid wire segment has a tiny swivel at one end for connecting the drop shot’s main fluorocarbon leader, while the open end slides through a slip sinker’s core. Forming a small loop in the stem’s open end prevents slippage, but if his weight finds its way into a tight squeeze, steady pressure will open that loop and allow the stem to slip free, preventing a complete rig loss.

Nixon prefers bullet weights, because pointing the conical head downward helps him slide his rig into nasty cover. Any slip sinker will do, and as Nixon notes, changing size or style does not necessitate retying. Nixon says he can get a solid week of fishing out of each stem, and if he feels the additional terminal-tackle element presents any issues in ­ultra-​clear water, he’ll trim it down and keep his weight snug to the swivel. Furthermore, the swivel isolates the weight’s inherent movement to prevent line twist.

A handful of years ago, these pre-made stems became hard to find. Nixon, of course, has a huge stockpile, but don’t expect him to share. Luckily, do-it-yourselfers can easily fashion their own drop-shot weight stems from garden or hobby wire available at big-box home improvement or craft stores. Just make sure the diameter fits loosely through the center of whichever weight you intend to use, and then add a swivel to one end of the wire stem.

Soft-plastic swimbaits, particularly hollow-belly models, entice monster bass with their realistic movement and thumping vibration. The problem is their soft, pliable bodies have a bad habit of slipping down the shank of a jighead. This can happen as a result of short-striking fish or simply water resistance from multiple retrieves. To prevent this frustration, anglers lean on superglue to bond the swimbait’s nose to the back side of a leadhead jig. This hack works, but it becomes a real hassle when you want to change baits and have to deal with removing the last one you cemented in place. That’s why Arkansas-based bass pro Mark Davis forgoes the sticky stuff in favor of a homemade swimbait keeper arm that requires only wire, needle-nose pliers, and patient precision to craft. Starting with a 6-inch piece of 20/1000 wire, Davis forms a tight loop that he attaches to the eye of a swimbait head. This keeper arm will end up being short, though starting with 6 inches makes bending much easier. With the wire secured, Davis measures about halfway back between the base of the leadhead and the bend of the hook. At this point, he’ll grip the wire with his pliers and bend the end diagonally downward at a 45-​­degree angle. Holding the keeper arm parallel to the hook shank and envisioning the approximate mass of a swimbait, Davis pinches that 45-degree leg against the hook shank and then bends the terminal end into a U around the shank. Clipping this U at about 1⁄4 inch provides a secure latch that won’t interfere with the bait’s action.

To employ his keeper arm, Davis threads a swimbait onto the leadhead in normal fashion and then forces the angled leg downward through the bait’s back until it reaches the hook shank. Latching the U-shaped tip around the shank takes a little practice since you’re operating blind, but once it sets, the bait will not slip no matter how many fish thump it or how many hours you spend reeling it back to the boat.