How to Rig a Mega Spinning Decoy Spread

Here's how a noted waterfowl guide brings in flocks ducks, geese, and cranes with a spread of spinners 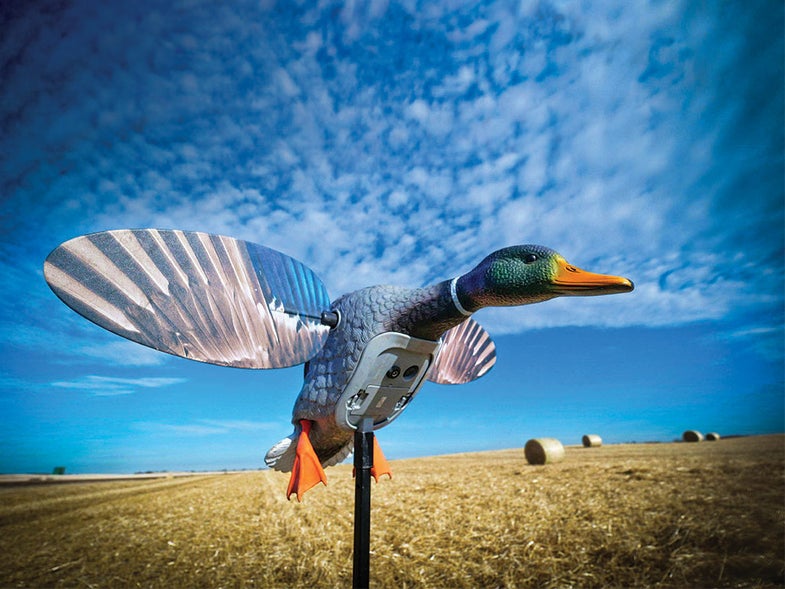 Habitat Flats guide ­Arliss Reed kills limits of ducks, geese, and cranes from Saskatchewan to Missouri, and New York to Arkansas. The secret is in the setup. When a mixed bag of birds is in the area, Reed runs a mega spread of spinning-wing puddle-duck decoys and full-body plastic geese. He keeps the spinners on until he hears geese or cranes, then he hits the kill switch and hand-flags and calls the big birds into gun range. “You can get a lot of birds in the landing zone with a half-dozen spinners and a goose spread,” he says. Here’s how he does it.

The downside of spinning-wing decoys is when they’re turned on, they repel geese and cranes. The solution is to hot-wire all of your spinners to a master control panel or to one remote switch. This way, the whole spread turns on and off at once. Reed does not use static duck decoys in his spread, because picky geese often don’t finish to them. Instead, he’ll set a traditional goose spread, then work spinners into and around the kill hole.

The height of the spinner doesn’t matter to ducks, but if you have a flock of motion decoys on poles 8 to 10 feet above the ground, geese may avoid them. Reed stakes his spinners about 2 feet off the ground and makes sure the stakes are solid so the dekes don’t wobble. “A tippy decoy doesn’t look good,” he says.

Ducks will generally finish right near the spinners, so Reed concentrates them 20 yards out, to both sides of the kill hole. But what’s even more important, he says, is the direction the spinners are facing. Reed stakes the first decoy so it faces the rising sun on a morning hunt or the setting sun on an evening hunt, so the spinner reflects as much light as possible. The next spinner faces into the wind, just the way the real birds will finish. “I’ll run two other spinners 90 degrees to the wind and sun, so the birds can see the decoys flash from whatever direction they’re flying,” Reed explains. If Reed has more than four spinners going, he will set the rest into the wind. If he’s in a timber hole or a spot with plenty of shade, he makes sure most of them are in a patch of open sun. “That sun flash is most important,” he says. “Get the flash, get the ducks.”

Hot-wire a mega spread of four to 16 spinning-wing decoys and control them all with the flip of a switch. This project makes setting up all of those dekes as easy as plugging in a power cord.

Crank It to 11: A Mojo Decoy Boss works as the power switch for a flock of spinning decoys. Cooper Olmstead