How to Sharpen a Knife to a Razor’s Edge

With the right steel, a couple tools, and this method, you can get a blade shaving sharp 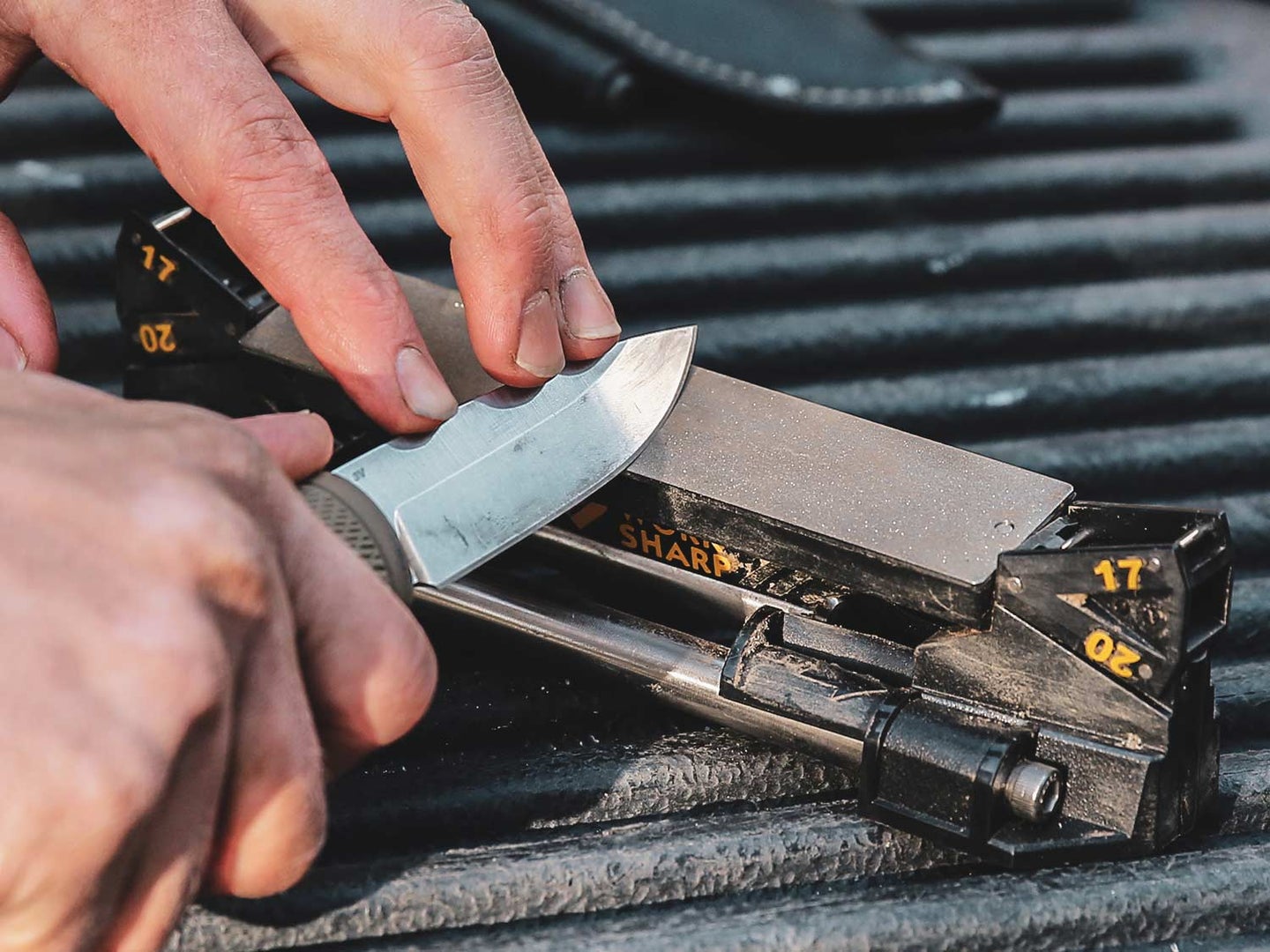 "How to Sharpen a Knife to a Razor’s Edge" by David E. Petzal.
SHARE

Before we get too far into this, I have to confess that I can’t take any knife and get it shaving sharp. Possibly someone can, but not I. That’s because not all knives are created equal. Some, with the proper attention, can peel the hair off your arm. Some can take an acceptable edge. Some will never be able to slice warm marzipan. So, I buy only knives that I know can equal a straight razor with a little work.

There are three factors that determine what kind of edge you get. First is the type of grind that shapes the blade. Second is the type of steel. Third is the temper of the steel. Every type of grind works if done properly, and there’s a fair degree of latitude in how the knife is tempered. The big variable is the steel. There are two dozen types commonly used, and if you’d like a guide to them, you can find it on knifeinformer.com.

How to Choose a Blade

From what I’ve seen, if you’re looking for the sharpest possible edge, pick a humble, low-tech steel that’s been around forever called 1095. It sharpens easily and rusts if a cloud passes over the sun. Everything in steel is a tradeoff. All of my knives are made of 1095, or W-2, or D-2, or 0-1, or 5016. They all rust if you don’t take care of them, but they all sharpen easily and take a terrific edge and acquire a nice blue color as they are exposed to blood, onions, or anything corrosive.

Or you can choose it by make. I don’t know of a custom smith who will sell you a knife with a poor edge. Some manufacturers do especially well. Swedish Moras, Norwegian Helles, American DiamondBlades, and any Japanese knife all come very, very sharp, and are easy to maintain that way.

Helle Knives are one of several makes that are easy to sharpen to a very fine edge. Helle Knives

How to Sharpen a Blade

I sharpen by hand, and I suspect that it’s a vanishing skill. I first tried to sharpen knives in 1953, and it was years and years before I figured it out, and I ruined a lot of knives in the process. Having paid my dues, I’m damned if I’m going to go the machine route.

The best edge angle for a hunting knife is between 15 and 20 degrees, and you have to keep that angle absolutely consistent with every sharpening stroke. The first step in my sharpening process puts on an angle of 20 degrees. The second step takes that down to 15 degrees, which gives you a multiple bevel. What you should see on the very edge of the blade is a bright line about the thickness of a piece of heavy thread. Good sharpening removes very little steel. 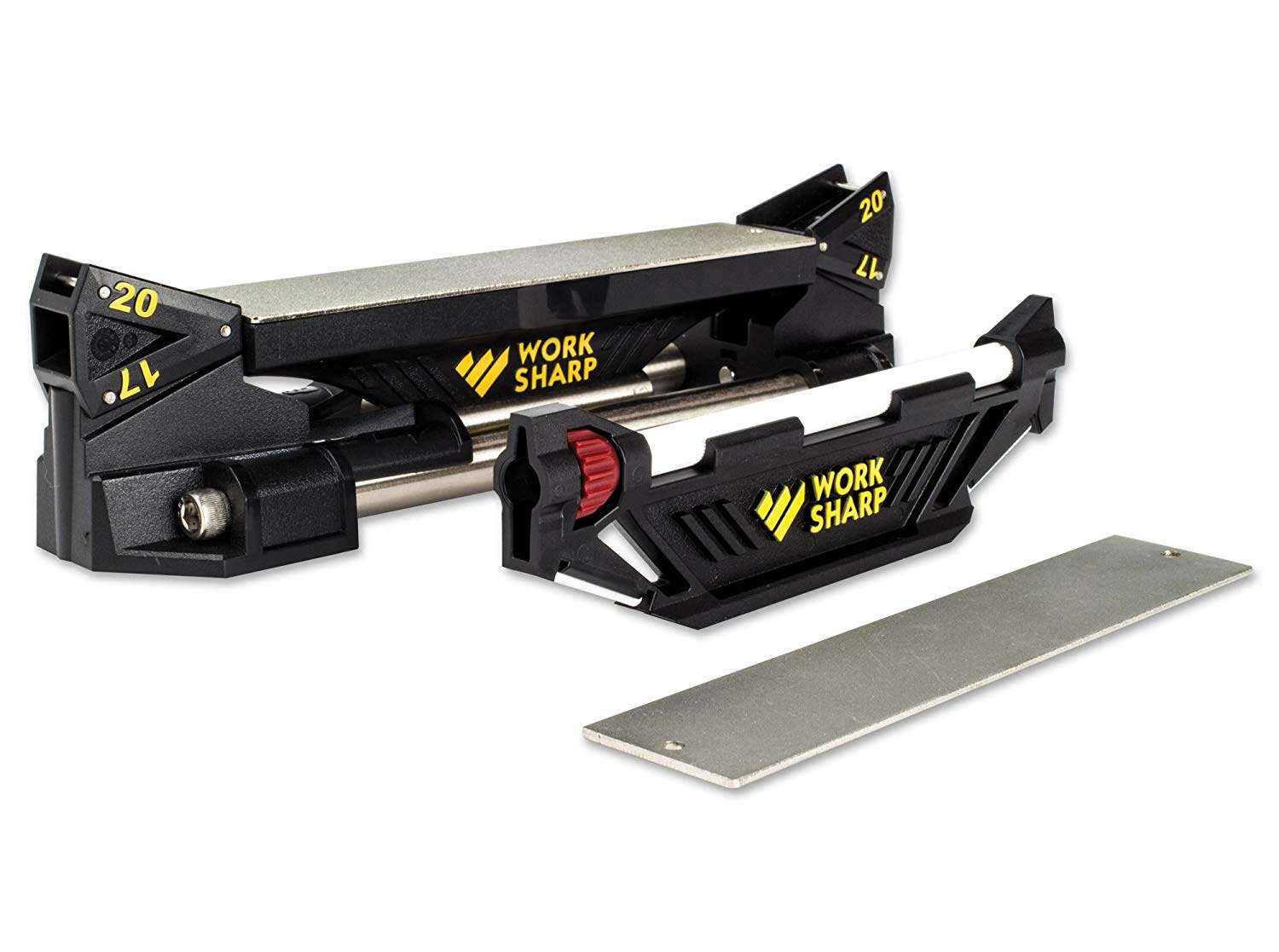 I use two tools to sharpen. The primary one is the Work Sharp Guided Sharpening System, or GSS, which is small, simple, and comes with lots of bells and whistles that you can ignore.The guts of the GSS are two diamond-coated steel plates that attach to the frame via magnets. There’s a Coarse plate and a Fine plate. Ignore the Coarse plate unless you have no edge left at all.

At either end of the GSS are guides that can be set to 17 degrees or 20 degrees. I use 20. Lay the blade on the guide, and you have your 20-degree angle. Now sweep the blade across the diamond plate, following the edge to the point. If you do this correctly, you’ll end up with the handle in the air, close to vertical. The GSS is equipped with a feature that’s called Pivot Response. It allows the diamond plate to pivot as you sweep toward the point, keeping the little diamonds in constant contact with the steel.

Alternate sides. You don’t give the blade six on the left and then six on the right; you go left, right, left, right, just like in the Service. After a dozen combined strokes, spray Birchwood-Casey Gun Scrubber on the diamond plate, and wipe it off immediately with a gun patch. This removes the steel dust you’ve ground off and keeps the diamonds cutting. Usually, a dozen strokes on each side will get you to sharp. You could quit now. To get it shaving sharp, you now have to switch tools.

How to Hone to a Razor’s Edge

So far, you’ve been grinding. Now you’re going to hone. For this, go to agrussell.com and behold the A.G. Russel Ceramic V-Sharpener. It consists of two ceramic rods, also called crock sticks, set at 15 degrees in a walnut block. It comes with medium and fine ceramic rods, and you’re interested in the white, or fine, rods. Sweep the edge down the rod, as the late and much-missed A.G. said, as though scraping a decal off it. Hold the blade vertical as you go. Alternate sides, and use only a modest amount of pressure. Unlike some similar sharpeners, A.G.’s does not have a handguard, so watch where you put your left hand. Also, don’t drop the ceramic rods because they shatter.

After a dozen strokes on either side, do another dozen with just enough pressure to keep the edge on the rod. Now, at your own risk, see if you can shave hair off your forearm or shin. If you can, you have reached razor sharp. If not, keep working on the crock sticks; sometimes it takes a while.

The purpose of this is to remove the “wire” edge that forms when a blade is sharpened. You do so by bending it back and forth until it snaps off. This is done with the very light alternating strokes.

You can do the same thing with a barber’s strop, which is a heavy leather strap, sometimes with canvas on one side, that practitioners of the tonsorial arts use to keep their straight razors sharp. A good strop is expensive, and requires considerable skill to use, so I’ll stick with the crock sticks. The other alternative, if you have a grinding wheel, is a muslin polishing wheel. However, polishing the blade on a power tool is dangerous in the extreme, since the wheel can grab the blade and fling it into your leg or stomach or foot. George Herron, who is now in the Knifemakers’ Guild Hall of Fame, told me there were some mornings when he had to polish, and got a queasy feeling in his stomach, and did something else instead.

How to—and Not to—Enjoy a Keen Edge

Now that your knife is extremely sharp, I’ll share a few other observations on extreme sharpness. First, you don’t need it for everything. I have a machete made by Pat Tomes, which I got in 1987 and have used ceaselessly since then. I have never been able to get it really sharp. It cuts just fine anyway.

Second, if you’d like to try shaving with a hunting knife, there’s a step you have to take first. Go to whatever hospital the EMT people will take you to and ask to donate a pint of blood as an autologous donor. This means they’ll hold it for you until you arrive on a stretcher. Shaving with a knife, unless you already can shave with a straight razor, is a bad choice.

Finally, perhaps the greatest pleasure in learning how to sharpen is the reaction of people when they first encounter a truly keen edge. Some years ago, I got a knife from Bob Dozier, who is a terrific custom smith, and used it a while, and gave it, very sharp, to Slaton White, who was then Editor of Field & Stream. Slaton took it deer hunting and handed it to a friend to work on a buck.

The friend used it a little and yelped, “Holy sh*t, who sharpened this thing, Jack the Ripper?”

I smiled when I heard that.