How to Up Your Odds Hunting Grouse

The bird in the picture is the only grouse F&S reader Springerman3 and I shot in two days in Wisconsin... 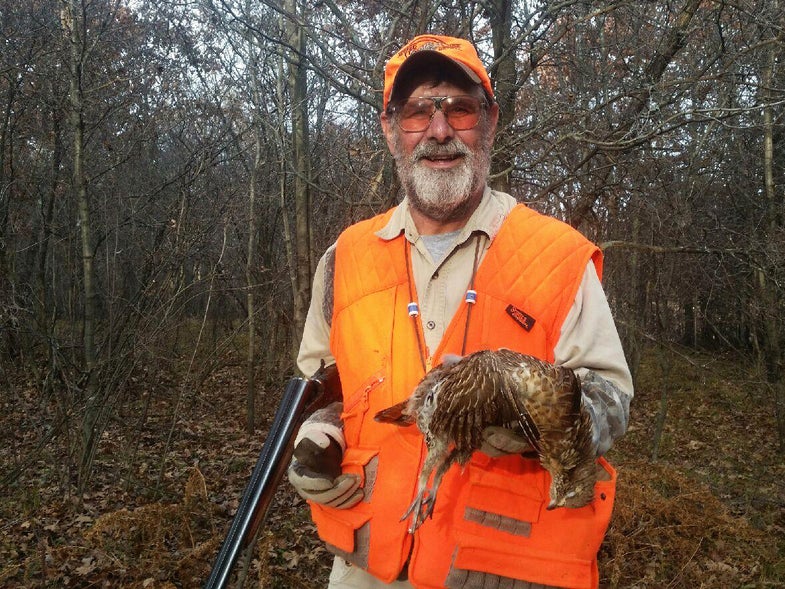 The bird in the picture is the only grouse F&S reader Springerman3 and I shot in two days in Wisconsin last weekend. I had forgotten just how many things have to go right in order to put a grouse in the bag. You flush more grouse than you see, you see more than you shoot at, and—most of us anyway—miss more grouse than we hit.

I like shooting at grouse because, with the exception of the rare, botched gimme* shot, there is hardly ever a reason to feel bad about missing one. You shoot at a grouse through the brush, it falls or it doesn’t, you send the dog to look for it either way because sometimes you don’t even know if you’ve hit a grouse, then you go on to the next bird. It’s not like missing a pheasant out in the open and you kick yourself.

Grouse shooting isn’t totally random, however. You can tilt the odds in your favor. Keep your gun at port arms when you’re near likely spots. Try to plan your route through the cover to give yourself the best possible shooting windows. Don’t stop in spots where you don’t want to shoot, since that pause can unnerve grouse and make them flush. Knowing that, stop only in places where you can see and have room to swing your gun.

If you have more than one hunter, try to flank the dog when it gets birdy. We would try to get 15 or 20 yards, or more, out to the sides to be ready, no matter what direction the grouse flushed. Several years ago, when I last hunted in Minnesota, the guides wanted us 50 or more yards away from the dog as it tracked moving grouse. If the bird flushed wild, we would have a chance at it. If it sat tight, the dog’s owner would flush it.

If you get a point, get to it quickly. If it’s a grouse, you’ll be ready when it flushes. If the dogs hold (usually for a woodcock) you can stand there at the ready until everyone else arrives and place them for a good shot.

When birds flush, read their line of flight and move the gun along it. Ignore the trees and shoot somewhere in front of the grouse. It’s surprising how often that works, and it works a lot better than waiting for an open shot.

Four of us—me, Springerman, and two hard-hunting locals—all carried 20-gauge break-actions, three O/Us (Caesar Guerini, Beretta, Weatherby), and one double (Franchi), all fairly light guns that are easy to carry one-handed in the bushes. All the guns had open chokes.

Finally, look up. Grouse flush from trees sometimes, which isn’t a hard shot if you’re ready for it. After the shot, it doesn’t hurt to look up, either. Springerman thought he had made a good hit on this bird, and we had both seen it slanting downward after the shot, but two of us and his dog couldn’t find it—until he happened to look up and spot the grouse stuck on a tree branch ten feet off the ground.

*The missed gimmes haunt you. I still think about a grouse I missed quartering at me at 20 yards in an open field in northeast Iowa—and that must have been 30 years ago. That shot is near the top of my life list of shots I wish I could do over.