What Turkey Calls Work Best During the Fall? 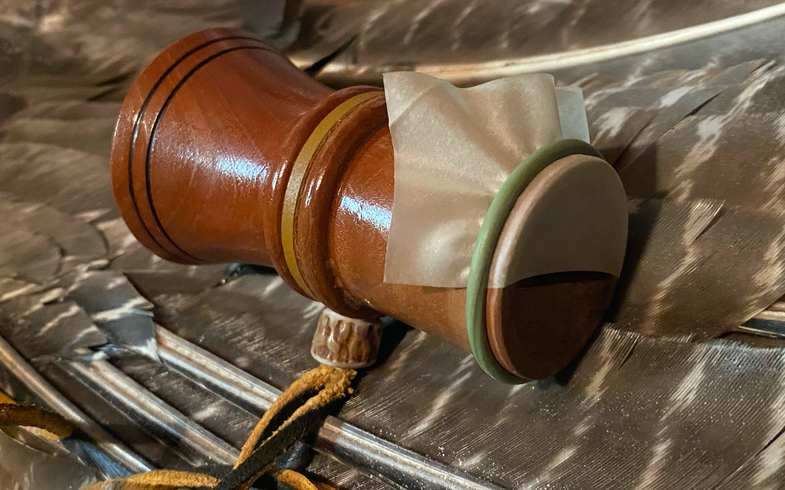 Adjust the tension and spacing on the latex of a tube call until you the sound you're after. Brian Lovett
SHARE

The phrase “autumn turkey calls” might seem like a misnomer, as good yelpers make realistic sounds year-round. But fall hunting brings unique opportunities, as wild turkeys interact and chat differently in autumn than in spring, using vocalizations that might be unfamiliar to some folks. Veteran hunters respond in kind, often switching up their call arsenal to better mimic the quarry.

So what should you pack in your turkey vest this season? We asked several noted fall turkey nuts to reveal their favorite autumn calls.

When to Use Box Calls and Pot Calls for Fall Turkeys

Marlin Watkins, a devoted fall turkey hunter and award-winning call maker from Ohio, starts the season mainly using one of his boat-paddle-style long boxes, which proves especially effective when calling to family flocks after a scatter. “At that time, momma still rules her brood, so I make jenny hen (young hen) kee-kees with jenny yelping,” he said. “As soon as I hear a bird, I can mimic it with that paddle call. If I hear a young gobbler kee and yelp, I do exactly what he does. If it’s a jenny, I mimic her, and many times, it’s an adult hen, so the paddle can mimic her as well.”

As the season progresses, Watkins said, young gobblers seem to be the focal point for assembly, so he switches gears somewhat. “I’ll still use the paddle call, but I mix in coarser yelping and clucking using a box call and most times finish the bird with the box,” he said.

When the autumn woods are quiet, Watkins uses one of his Coaxer calls, which is a hand-made pot that produces ultra-soft turkey talk. “This is when they have gotten back together (after a scatter) in little groups and are just walking around flock-talking till they all get together,” he said. “When doing this, you need to keep your head up, because a group of birds will just appear many times without saying a word.”

If walking and calling while trying to locate turkeys, Watkins again favors the paddle call, yelping and cutting about every 100 yards. “It seems like there is a time frame the small groups of family birds want to get together with other small groups to spend the winter,” he said. “During this time, an adult hen will jump all over the paddle call, or if you have a group spread out feeding, a young bird will kee-kee back.”

Calling Autumn Birds with a Tube

Longtime fall turkey devotee and call designer Tad Brown, of Missouri, has a clear favorite for the autumn woods: the tube call. This style of call is a small wooden or plastic tube (old-timers built them with pill bottles) with latex stretched and attached over part of the mouth opening. “I can do everything on it I need to, including gobbling, fighting purrs and kee-kees, although those aren’t the prettiest,” he said.

Some hunters have difficulty operating a tube, as the devices can seem a bit finicky. Brown advised folks to practice and experiment. “Tension and spacing are critical,” he said. “Each individual needs to play with the (reed) tension to get the desired sound they want. And the spacing of the gap between the latex and the flat mouthpiece is also a personal setting that works best for the individual. Some do better with a larger space, and others prefer the gap tighter. There is a lot of room for adjustment tension- and space-wise for each individual to find their sweet spot.”

And as with any air-operated instrument, air control plays a huge role. “Start with small amounts of air and work yourself up as you get comfortable with it,” Brown said. “The gobble is similar to making a feed chuckle on a duck call. Fighting purrs are created by fluttering the back of your throat. It doesn’t have to be perfect to trick a turkey, so don’t be too critical of yourself.”

Diaphragm calls can produce almost any turkey vocalization, so they remain as effective in fall as during spring. Brett Berry, an serious fall turkey-dog hunter from Ohio, uses a three-reed ghost cut yelper from High Class Calls, made by Matt Van Cise of Pennsylvania. “It’s versatile, as I can kee-kee, cluck, lost-yelp, and gobbler-yelp on it,” Berry said. “Most important, it’s hands-free, so you can hold your shotgun and position yourself on approaching birds.”

Josh Grossenbacher, a champion caller from Ohio and pro-staffer with Rolling Thunder Game Calls, uses the same mouth call he favors in spring: a combo cut. “I can get so much versatility out of this style of mouth yelper, whether it’s soft, low-volume yelps to loud assembly yelps,” he said. “I just have so much confidence in it. I also will push the air through the wider cut side of a combo cut to whistle and produce kee-kees when I find myself in a situation where they are needed. Being hands-free with a mouth call is also a big advantage when hunting in the wide-open woods later into the fall season after the leaves have dropped.”

Shane Simpson, a competition caller and hunting video producer from Minnesota, relies on reverse combo cuts or batwing-style mouth calls from Hook’s Custom Calls. “In fall, I focus more on kee-kees and yelping, so a mouth call usually does it for me,” he said.

Brett Ladeau, an accomplished fall hunter and competitive friction caller from Vermont, frequently uses an anodized aluminum call in a cherry pot during fall hunts. “It has a great kee-kee, and I can also use it for some assembly yelps, too,” he said. “I typically use a snakewood striker on it. That seems to bring it to life.”

Ladeau said he also carries a long box for making kee-kees. In addition to his favorite mouth calls, Simpson totes a “really loud, ear-piercing” glass or crystal pot call during autumn. “It’s just a good all-around call for yelping if I want to yelp loud,” he said. “I don’t use it quite as much in fall, but I’ll bring it out at the end (of a sequence) if I’m just walking and calling.”

Doug Herman, a former guide and competition caller from Nebraska, loves using a cane yelper built by Tony Ezolt, which produces great soft yelps and spot-on clucks. “It also produces the perfect pleading kee-kees of that long-lost poult that will most times elicit a response from a mature hen,” Herman said. “I’m not fortunate enough to have large tracts of timber where I hunt to break birds and call them back, so I rely more on scouting the birds to see where they are roosting and feeding and set up along that route with soft calling in hopes of getting a response. If the birds aren’t working my way, I tend to reposition my setup to get more in front of them, as it’s always easier to call bird to a place they want to be.”

Herman also carries one of his hand-built nail calls, which is a nail driven into a small block of wood and then run across a striker. “The kee-kees are very realistic, and clucks, too,” he said. “I keep referring to those two vocalizations, along with some soft plain yelping. The reason is that’s what I hear fall birds do. Fall turkeys are in a flock and rely heavily upon their eyesight as a defense mechanism. Loud calling attracts predators, so most times when I hear turkeys in the fall after the morning assembly, it’s soft yelping and mainly clucks. I’ve had birds walk into my setup in fall and stand just over the rise looking for the turkey they heard, and they will just cluck constantly till they see the bird or leave. A lot of times, I feel a turkey will cluck to ask the question, Where are you? It’s soft and carries a good distance through the woods, and it doesn’t attract predators like a bunch of loud yelping.”

Herman also uses a one-sided black limba short box made by Tennessee call maker Jeff McKamey for old-hen assembly yelping if he breaks up a flock in timber and attempts to call the birds back. “I affectionately call it the spider box because I found it on the floor of Jeff’s shop and had to evict a family of spiders out of it to claim it as mine,” he said.

You Make the Call

Ultimately, the best fall call is the one in which you have faith—and the one that produces true-to-life vocalizations that bring turkeys sure-kill close. As Watkins said, “There are so many different situations in fall woods that it’s hard to say what a favorite call is.” True. But by taking hints from the pros, you’ll at least have several great options.