The 5 Most Effective Calls and Vocalizations for Fall Turkey Hunting

Plus, expert tips on how to make them and which call styles work best for each 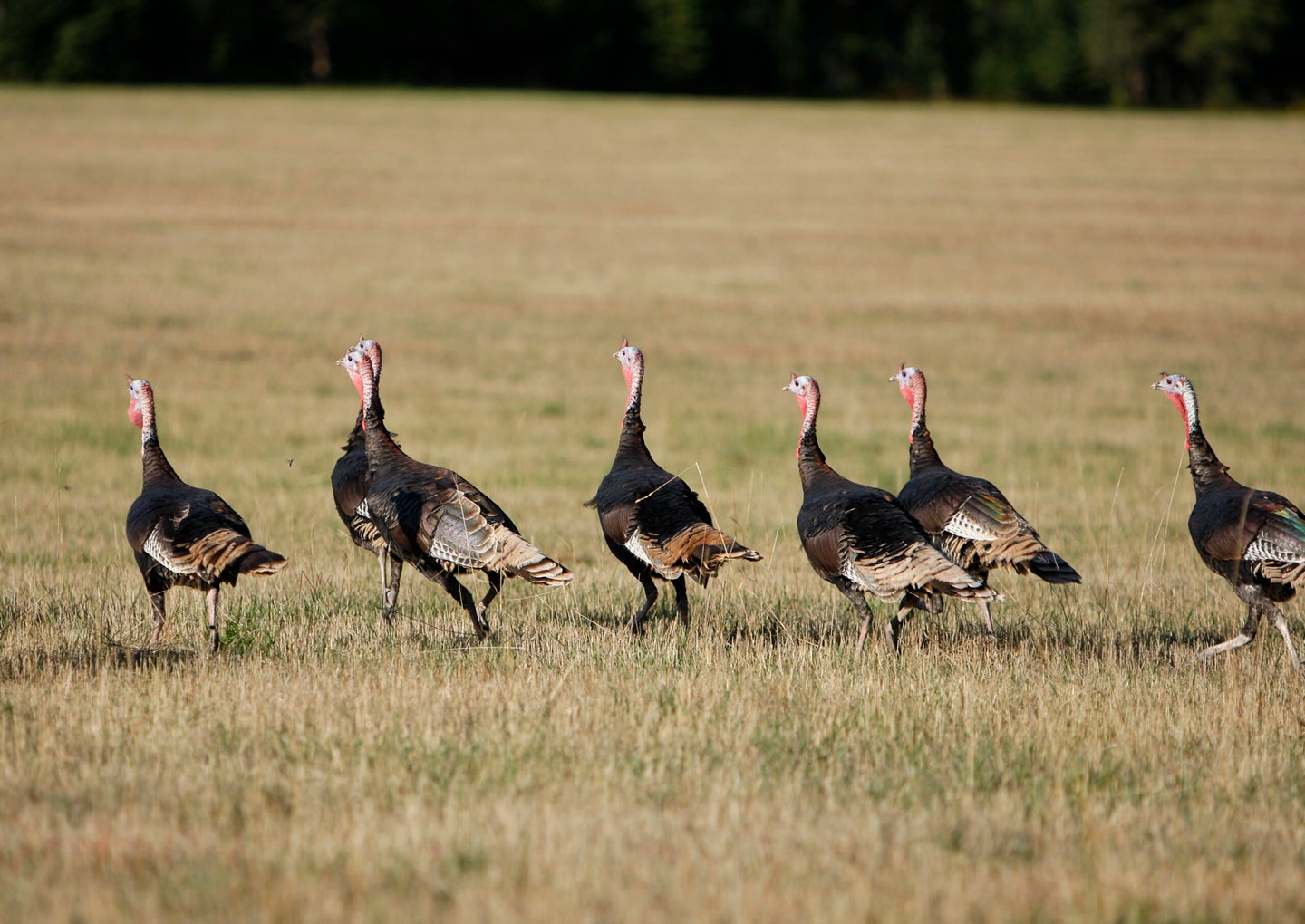 A well-known turkey hunter once said that the only vocalizations needed to kill any willing spring gobbler were variations of the yelp and cluck. Whether or not that’s true, fall hunters must expand their turkey vocabulary considerably to communicate with the varied types of turkeys on the autumn landscape. And as part of that, they must learn new skills with several calling devices—stuff that goes beyond the standard yelping, clucking, and, perhaps, purring upon which many spring hunters rely.

Let’s review several of the most common turkey vocalizations you’ll need during fall and examine how to produce those sounds on several types of calls. With practice, you’ll soon sound like the real thing.

Brood hens use this vocalization to reassemble their poults after the flock has scattered. Essentially, it’s just a long, loud, pleading string of yelps. If you’re competent at producing plain or excited yelps during spring, you can easily master this call. Extend the sequence longer, uttering 20 or more yelps rather than the five-to-seven-note strings common in spring. Start somewhat slowly, with a single yelp or two, and then ratchet up the excitement and urgency as the sequence starts rolling.

The Best Call for Assembly Yelps

You can use any instrument for assembly yelps, including diaphragms, pot calls, or box calls. Many veteran fall hunters use long boxes, which cut through the wind and other ambient noise.

2. Yelping and Clucking to Gobblers and Jakes

Male turkeys yelp and cluck all the time, and these calls are especially useful in fall if you’re trying to locate groups of gobblers or jakes, or if you have encountered a scattered a flock of male turkeys. The call isn’t tough to produce, but many hunters struggle with its speed and frequency, which differs from that of hen yelps.

“Slow your cadence down to where you almost feel like the yelping is half the speed of what a hen would yelp,” said Scott Ellis, a champion turkey caller and Woodhaven Custom Turkey Calls pro-staffer from Florida. “The general rule of thumb is to also try to get a deeper ‘honking’ yelp. Go very light on the paddle of a box to achieve the deeper tone. Call in the center of any pot call, which will create that deeper sound. As for mouth calls, just drop all pressure off the call, and you can attain the proper pitch.”

Gobbler clucks also differ somewhat from those made by hens. Often, male turkeys utter coarser, louder clucks. You can make these by adjusting your air pressure while running a mouth call, popping your striker on the center of a pot call or changing the paddle position and pressure on a box.

The Best Call for Yelps and Clucks

Many experienced fall callers use tube calls, scratch boxes or trough calls for gobbler sounds, as these devices seem to lend themselves to the deeper, coarser sounds of male turkeys. Tube calls run similarly to mouth calls, as they’re air operated and use a latex reed for sound. Scratch boxes and trough calls produce sound via friction, and operating them isn’t much different than running a box or pot. These devices require special techniques, but you can become reasonably proficient with them by viewing online tutorials and practicing.

Yes, turkeys gobble during autumn—sometimes quite a bit. This vocalization can be extremely effective when targeting male turkeys in fall.

“For gobblers, I have the best luck just gobbling,” said Tad Brown, a Missouri hunter and legendary call designer currently with HS Strut. “If you get lucky enough to get a flock of gobblers or jakes scattered, gobbling is amazingly successful. I have had them come in strutting and gobbling just like during spring, especially if they’ve spent the night alone.”

The Best Call for Gobbling

Many hunters use two-sided box calls to gobble. Start the paddle somewhat lower on the rail, and then quickly whip it back and forth across both sides of the call to get the “chucka-chucka-chucka” sound and resonance of a gobble. You’ll have to experiment with individual boxes, as their sounds and pitch vary.

Tube calls also produce excellent gobbles, and some hunters use mouth calls or other air-operated devices—wingbones or trumpets, for example—to produce the sound. If all else fails, use an old-style gobble tube, which you can shake or pump with two hands to make deep, loud gobbles.

Turkeys make this vocalization—sometimes called fighting purrs—when they become agitated or aggressive, often uttering it when they spar with or attempt to intimidate another bird. The call is just a variation of standard purring, only louder, faster, and much more frenzied, often interspersed with aggressive whines. Hens and gobblers produce aggressive purrs, but the sound seems to work very well on fall gobblers, as it can prompt aggressive reactions related to their constantly shifting social hierarchy.

“I have a friend that has good luck with fighting purrs in the fall, pulling the whole group or scattered singles,” Brown said. “And fighting purrs seem pretty successful on those spring jakes going into their second fall. They are constantly trying to establish dominance.”

The Best Call for Aggressive Purrs

Pot calls are perfect for creating aggressive purrs, as you must simply master the technique of dragging the striker across the call’s surface to produce the loud, agitated purr. You’ll have to experiment with various types of pots to find the right technique and pitch. View online sound files of real turkeys to master the correct pitch and cadence.

Young turkeys frequently use these whistling calls, especially when they become separated from their brood. A kee-kee is simply an ascending series of two to four nasally whistles. The kee-kee run is a kee-kee with a crude yelp or two at the end. Young turkeys of both genders — jennies and jakes — use these calls. Jenny kee-kees are typically somewhat higher-pitched, and those of a jake are typically deeper and have more of a nasal quality, especially in the yelp of a kee-kee run.

Many hunters struggle to make these calls, but they shouldn’t. If you’re a proficient yelper, you’re already producing a whistle, which is the first note of any yelp. When kee-keeing, you simply extend the whistle note longer and avoid “rolling the call over” to the deeper second note of a yelp.

The Best Call for Kee-Kee Runs

Long boxes are perfect for kee-kees. Start the paddle at the point on the rail where it begins to produce a noise. Then slide it easily downward to make a whistle, again taking care not to move it too far so it rolls over. Repeat the sequence several more times to make the coordinated “kee-kee-kee” whistle. When you move to a kee-kee run, let the paddle travel farther down the sound board, rolling it naturally into a yelp.

Diaphragm calls also work well for kee-kees, as you should be able to find a tongue position on the call that produces a clear whistle without any fuzz or rasp. Utter several whistle notes for the kee-kee, and then roll it naturally into a yelp for a kee-kee run. Many callers prefer ghost cuts or cutter calls for kee-keeing.

Kee-keeing on friction calls might seem daunting, but it’s fairly intuitive. Again, refer back to the first note of your yelp, and just extend that single-note sound into a whistling series. Many callers use sort of an M pattern with their striker. Try to hold your striker almost straight up while whistling. To yelp at the end of a kee-kee run, just continue the whistle stroke but flick your wrist or roll the striker tip down in a half-moon or similar pattern. Glass and aluminum calls typically work best.

Here’s a dirty little secret: These fancy fall calls also work well in spring, too. And practicing them year-round makes you a much more polished and versatile hunter. Plus, messing with different vocalizations on calls is pure fun—especially when they might result in great tasting fall bird for the fryer.