Winter Storm Brewing? Bundle Up and Get Your Buck

Rain, snow, or sleet can actually bring killer hunting conditions. Here's how to weather the weather and bag your buck 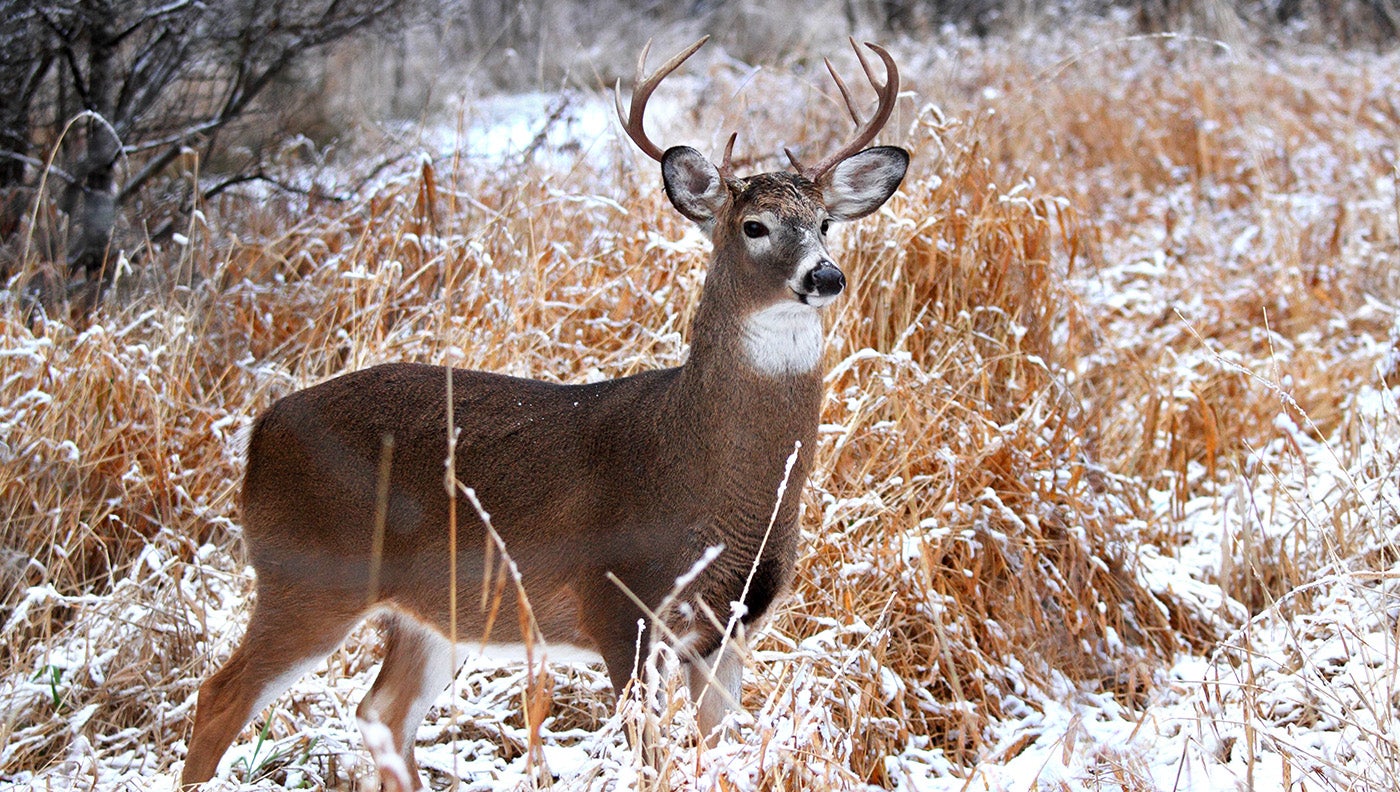 When chimney smoke leans toward the ground and swirling winds send spent leaves spiraling, take notice. A storm is brewing. And it’s time to rethink your hunting strategies for the days, even hours, ahead. A big winter storm can put deer down for a bit, but it’s more good news than bad, because the worst winter weather almost always bring a period, or two, of stellar hunting along with it. So keep a close eye on the forecast, keep your hunting gear handy, and be ready to take advantage. Here’s how.

How to Hunt Deer Before the Storm

Some of the best hunting opportunities of the deer season come before a storm. Deer don’t typically feed in the midst of a downpour or a driving snow, so they fill up before the nasty weather rolls in, and the miracle of Doppler radar can help you time your hunt just right.

If the storm will start in the afternoon, expect deer to feed late into the morning. If it’ll come at night, expect them to hit feeding areas early in the afternoon. And if a very powerful storm, especially a snowstorm, is moving in, gear up for a long vigil near a prime feeding area. It’s an opportunity that may come only once or twice a season. I have watched prime food sources absolutely fill up with deer ahead of a big winter storm, and when that happens, there’s a good chance even the biggest bucks will join the feast before shooting light fades.

Take extra precautions, though. Deer may be up and feeding at any time of the day, so choose a careful route to the feeding area and move in cautiously. Remember, too, that the wind often shifts from its usual course before a storm. You may already have a stand overlooking a prime feeding area, but if you hung it with prevailing winds in mind and prevailing winds aren’t blowing, you’ll need a new place to sit.

Tucking yourself into thick field-edge cover and making a quick natural blind is a good way to go in this situation. You can set up wherever the wind dictates, and you can do it quietly. Moreover, these setups are usually more comfortable than a tree stand during long hunts.

How to Hunt Deer During the Storm

Whitetails don’t mind softly falling flakes or even moderate rains. But heavy precipitation, especially when combined with a cold wind, puts deer down. During a driving downpour, slanting sleet, or blowing blizzard, deer head to sheltered areas, and they stay put. But as long as you’re willing to get off your comfy couch and brave the storm, you’ll have some factors working in your favor.

First, if you know your hunting area well, you should have a good idea of where the deer are. In hilly terrain, deer hole up in gullies, hollows, and hillsides that are protected from the wind and offer good overhead cover, typically conifer stands. In flatter terrain and farmland, they go to thick cover, especially where there are subtle dips or depressions in the topography (assuming such places offer some dry land). Keep in mind that it doesn’t take much cover to shelter a big buck. Years ago, while caught hunting in a blustery snowstorm, a friend and I pushed through a dense cattail slough the size of a child’s bedroom and woke up what may have been the biggest 8-point buck I’ve ever seen on the hoof. Too bad we were hunting pheasants.

Second, rain and fresh snow mean quiet footing. And gusty winds make it harder for deer to see, smell, and hear an approaching hunter. In other words, you’ve got ideal still-hunting conditions.

But there’s still the challenge of walking in on a bedded buck. Move slowly, taking a few steps when the wind rises and rustles the woods. Stop often, and glass meticulously. And make your approach perpendicular to the wind, rather than straight into it. Bad weather or not, most bucks prefer to bed with their backs to the wind and a reasonably clear view in front. Even in flat terrain, where deer do need thick ground cover in bad weather, bucks will often bed just inside the thick stuff, where they can peer out to the front. So come in from the side.

Finally, if you’re dealing with isolated patches of thick cover, a carefully planned drive can work well. And for those small, dense thickets that sometimes hold big bucks, quick two- or three-person drives can do the trick. Send the driver(s) in upwind, and put the poster toward the downwind side of the thicket but well off to the side, so that any buck peering straight downwind won’t spot him. As always, take extra safety precautions when driving, especially in flat terrain.

How to Hunt Deer After the Storm

What deer do after the storm depends on the type of storm. Heavy rains, for example, usually bring better hunting and rarely keep deer down for long. One of the very best times to be in the woods is right after a cold-front downpour that breaks a bout of warm weather. Whitetails may hole up during the worst of the wet stuff, but once it starts to subside, they react to the relief of cooler conditions. Deer that were sulking from sunup to sundown start moving during daylight. It’s a great time to be on stand, and the damp forest floor means quiet footing if you prefer to still-hunt.

That said, nothing gets deer on their feet, and feeding, like a snowstorm that dumps several inches of fresh flakes and ushers in cold, calm conditions. This can make a half-beaten hunter feel brand new. The new snow provides a clean slate. All the tracks are fresh, making current travel patterns plain to see. You can now pinpoint your stand placement, you can still-hunt quietly, or you can follow a set of fresh tracks to the buck that made them. If you’ve got a prime late-season food source on your property, you can just keep it really simple and sit on that food in the evening until a stud shows up, because he very well may.

Keep in mind, though, that big snowstorms frequently delay the best hunting until a day or more after the precipitation stops. Abrupt changes in temperature and lingering cold winds can keep deer in their sheltered areas and browsing nearby until conditions stabilize. Protracted snowstorms and cold winds may even keep deer down for several days, but there is an upside to this, because in the meantime, the deer get very hungry. Once conditions calm down, deer are eager to fill up on any choice foods still available. They’ll paw through several inches of snow to get at acorns or apples, and they’ll congregate in uncut cornfields and windswept grainfields and greenfields. If the snow is much deeper than a foot, however, they’ll head for prime browsing areas such as regenerating cuts. In either case, you should be there waiting.