Georgia Hunter Gets Redemption With a 196-Inch Second-Chance Slammer

Cory Croft thought his chance at taking a once-in-a-lifetime buck had come and gone during bow season. But with rifle season came another shot at success 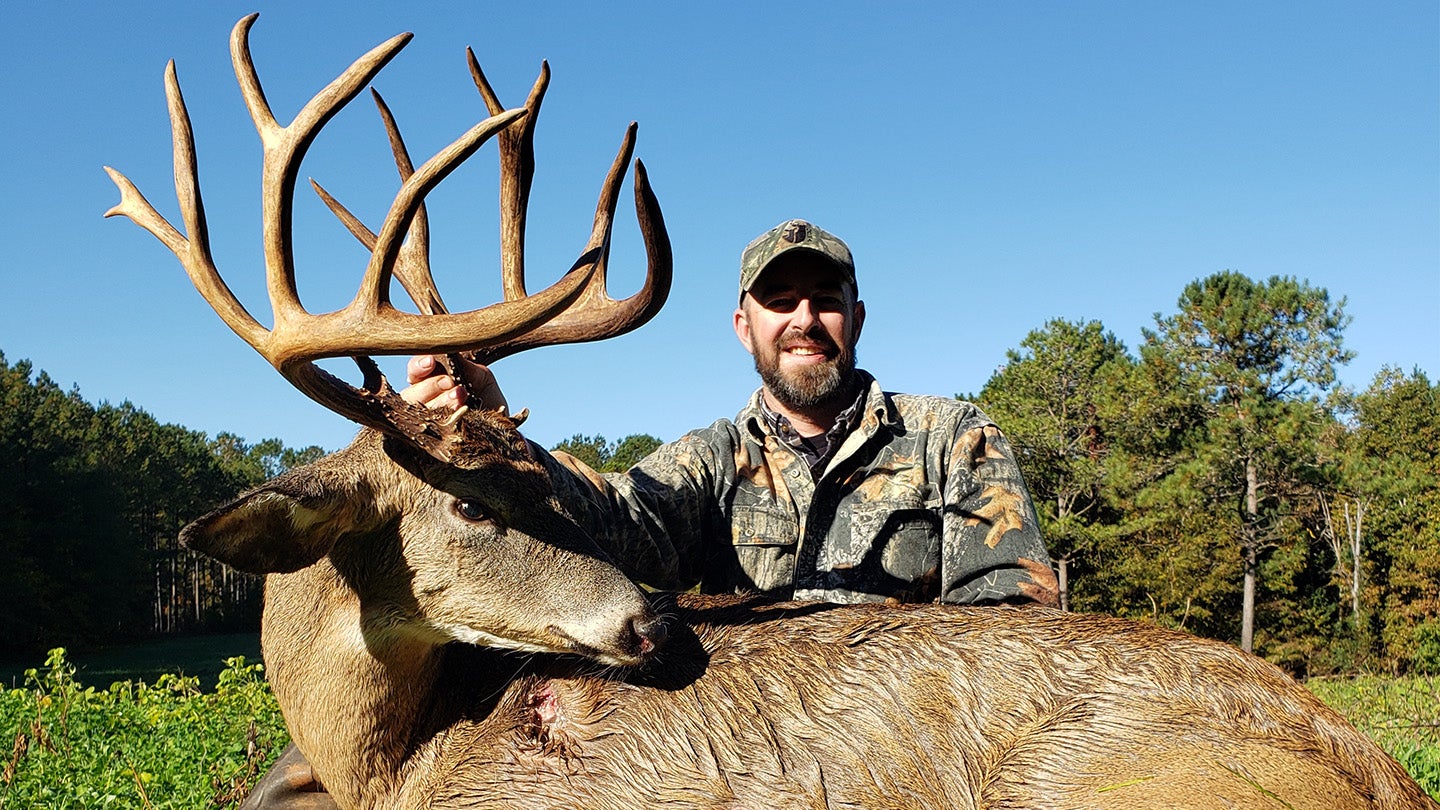 It’s not often a Georgia hunter gets a crack at a 190-class whitetail, but Cory Croft actually had two chances at a giant buck in the same season. Croft made an unfortunate bad hit on the buck during an early season archery hunt but was able to kill the deer while hunting the rut with his rifle. All told, Croft, who manages a prime tract of whitetail ground, had a three-year history with the Peach State monster.

Croft first saw the buck during the 2019 season. “He was a 150-class 3½-year-old that year,” he says. “That’s a great buck, but on this property we manage for 5½-year-old bucks, so he was off-limits.” Croft, a certified wildlife biologist and owner of Veritas Wildlife Services, got his first trail-cam pics of the buck that November. “He hung around for a couple of weeks, then disappeared. We’re good friends with the neighboring property owners, and they had pics of the buck from that summer, 2½ miles away. He was doing some traveling to hit both properties, but I figured if the buck wanted to summer on them and come to us in the fall, we were getting the better part of that deal.”

With high hopes for the 2020 season, Croft scanned camera after camera for the buck, only to be disappointed. “He just disappeared from our property that fall, and I run a lot of cameras in a grid-pattern survey that’s pretty intensive,” he says. “I can’t say I get every buck, but I don’t miss many. When I checked with the neighbors, they had the same report; the buck was just a no-show. So we figured something bad had happened. With that much distance separating our properties, it wasn’t hard to imagine.”

But when the 2021 season arrived, Croft was in for a pleasant surprise. “One day I got a text from the neighbor that just said ‘He’s back’ and I knew exactly which deer he was talking about,” Croft says. “Just like before, the buck left them in summer and came on to our place in the fall, right in time for the archery opener.” And he’d blown up into a true giant. Croft hunted the buck several times in the first weeks of bow season. “We have 120 acres of food plots on the property, with lots of Whitetail Institute clover, oats, and other varieties, and he was hitting those pretty hard.”

Finally, Croft was able to lay eyes on the buck during a last-minute bowhunt. “After being busy for awhile, I finally had an afternoon to hunt, but as I got my stuff together, I couldn’t find my release anywhere,” he says. “I had no choice but to run to the store and buy one. I came home and shot it a few times, but really didn’t have time to tune it very well. That came back to bite me when I finally went out for the hunt.”

That very afternoon, with Croft all settled into his tree stand, the came out and walked to within 20 yards. “I needed him to take two steps so I could get a shot at his vitals,” he says. But coyote suddenly move in from behind and spooked the buck, which ran off to about 80 yards. The coyote ran all the deer off the plot and trotted over toward Croft. “I decided not to shoot him, because there were still 90 minutes of shooting light left and I thought I might still have a chance.” He spooked the coyote, and sure enough, the buck came back out to the plot about 20 minutes later, but this time at 60 yards. “He fed for a while then disappeared, and I figured Well, that is it for tonight. Then suddenly, just at prime time, he came back out and stood at 22 yards. I drew and was settling in, and that’s when not knowing that release hurt,” Croft says. “I just barely touched it, and it went off before I was ready. I watched in shock as my arrow hit the buck square in the shoulder. I shoot 70 pounds, but I had almost zero penetration and found very little blood.”

While obviously upset about wounding the buck, Croft got some good news from the neighbor. “I called to tell him about the hunt, and to keep an eye out for the buck,” he says. “He told me that he had the buck on camera at 3 a.m., just hours after I’d hit him. I was relieved to know he was alive, but obviously disappointed that I hadn’t been able to make a clean kill when I had my chance.”

Croft figured his big opportunity at the buck had come and gone and that the old whitetail would avoid the property. “Then for some reason, the buck came back to us in November,” he says. “I was still hunting with the bow, as the rut was starting to build. I saw him several times, but he was always out of range.” Finally Croft decided to start taking his rifle. “On the morning of November 12, it was very foggy and as it got light I could see a couple of bucks with a doe. As I watched them through my binocular, I spotted the big one in the background, bedded. He’d been there the whole time. One of the smaller bucks, a 3½-year-old, started walking toward me and I thought This is perfect, and sure enough, the big one stood up to follow and while he was standing in some tall grass, I had a good shot to his vitals. When I pulled the trigger he bucked and ran, then quickly disappeared. I felt like the shot was good, and it was, as he only ran about 10 yards.”

Croft was thrilled to get a second chance at a buck of a lifetime, but for another reason too. “The buck was not doing well after the arrow wound,” he says. “He’d lost a lot of weight, and it didn’t seem like he was participating in the rut. He might have recovered, but you never know, so I was really happy to get another chance.” Croft’s Peach State main-frame 10-point with matching forked G2s and G3s had 18 scorable points and grossed 196 inches B&C. “It’s a buck of a lifetime most anywhere I guess,” Croft says. “But a truly special whitetail in Georgia.”