My First Deer: A Gift From Eddie

After a shaky start, the author couldn't have scripted a more perfect whitetail hunt 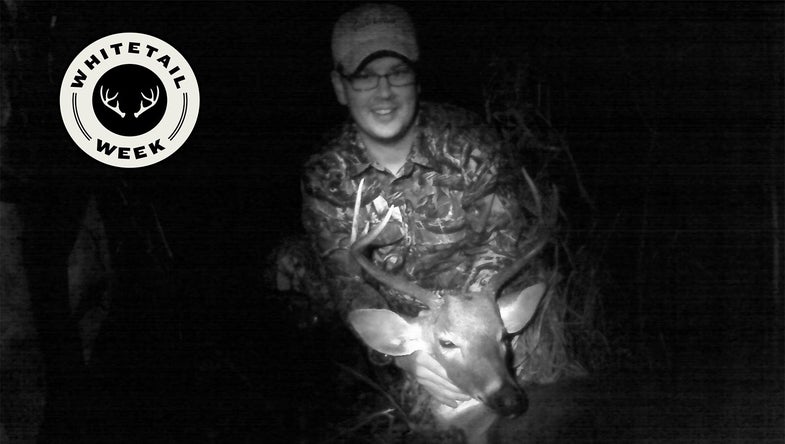 The author with his first deer, tagged during the 2010 season in North Carolina. Colin Kearns
SHARE

The evening I shot my first deer started with a real pain in the ass. I was in North Carolina, hunting with my pal T. Edward Nickens and his buddy Scott Wood on their deer lease. Eddie and I been working together for several years by then, and he’d invited me to come down from New York to his neck of the whitetail woods for my first whitetail hunt.

On this evening, which took place on day two of the trip, Eddie struck off in one direction—a climber stand on his back, his lever gun slung on his shoulder—while Scott led me to a tree with a hang-on stand. After he wished me luck and moved on to his own spot, I made my way up the tree. It wasn’t till I reached the platform that I realized the seat on the stand lacked a cushion. I may not have had much deer-hunting experience at the time, but I knew enough to know that I was in for an uncomfortable sit.

Turns out, the physical discomfort would be the least of my concerns. This was the highest treestand I’d ever hunted from, and I wasn’t prepared for the psychological effects of the wind. Each gust that swayed me back and forth was more unnerving than the next. I was nearly frozen with fear, and I knew that if a deer did appear, I wouldn’t have had the moxie to turn or stand for a shot at it. I don’t remember how long I lasted up there, but eventually I used the pain in my ass as an excuse to climb down and hunt from the ground for the rest of the evening.

The relief I felt sitting at the base of the tree was immense—and restorative. It was as if I’d hit reset on the hunt and could finally focus on the woods during the hours of legal shooting light that remained. And were it not for that refreshed focus—had I stayed up in that metronome of a tree—I doubt very much that I would’ve had the presence of mind to notice the sudden sound of dried leaves crunching rhythmically beneath a critter’s weight. That’s no squirrel, I thought.

The small buck was moving along the edge of some thick brush. The adrenaline I felt at the sight of him doused any trace of the soreness and fear from earlier. I’d come here wanting and hoping to shoot a deer—but not really expecting to. Tagging a buck on your first-ever hunt seemed like too much to ask for. But if you were to script the perfect scene for a hunter’s first deer, you’d be hard-pressed to improve upon what was about to happen to me.

The buck turned right and began to come directly my way. The moment he started to pass behind a large tree that stood between us, I quickly shifted into a kneeling position and got my eye behind the scope. Shortly after he emerged from behind the tree, he stopped, perfectly broadside, less than 70 yards away. I pulled the trigger. The deer bolted.

By the time I finally stopped shaking, enough minutes had expired that I could go looking. I went to where the deer last stood, but couldn’t find any blood—just some hairs. I was convinced that I’d missed, and texted Eddie saying so. He replied, telling me to hang tight. Before shooting light ended, I heard a gunshot over by where he was hunting. At least someone got a deer, I remember thinking.

Eddie and Scott came over to help me search, and it didn’t take them long to find some blood, then some more, and then a steady trail. We hadn’t been looking for more than 15 minutes before I heard someone say for the first, but not last, time in my hunting life: “Here he is.” He was a small buck, sure, but when all you’ve hunted up to that point in your life are squirrels and turkeys and birds, a first deer is a very big deal. Even I knew that.

We dragged the deer into a clearing. Now came the dirty work—and I was without a knife. Don’t ask me what I was thinking when I packed for the trip, but I’d forgotten to bring a knife. That oversight, however, only strengthened what turned out to the next scene in the perfect script of my first deer. Eddie unzipped his backpack and reached in to grab small box, which he then gave to me. Inside was a brand-new knife—a razor-sharp folder with a blaze-orange handle—that he’d brought for just such an occasion. I was at a loss for words. My first deer. And, now, my first real hunting knife.

With Eddie’s help and guidance, I used that knife to gut, skin, and break down my first deer. Since then, I’ve used that blade on other deer, plus pronghorn, black bears, turkeys, ducks, and pheasants. Every time I unfold that knife—every time I gently graze the edge with my thumb to test its sharpness—I can’t help but remember my first deer, and think of my friend.