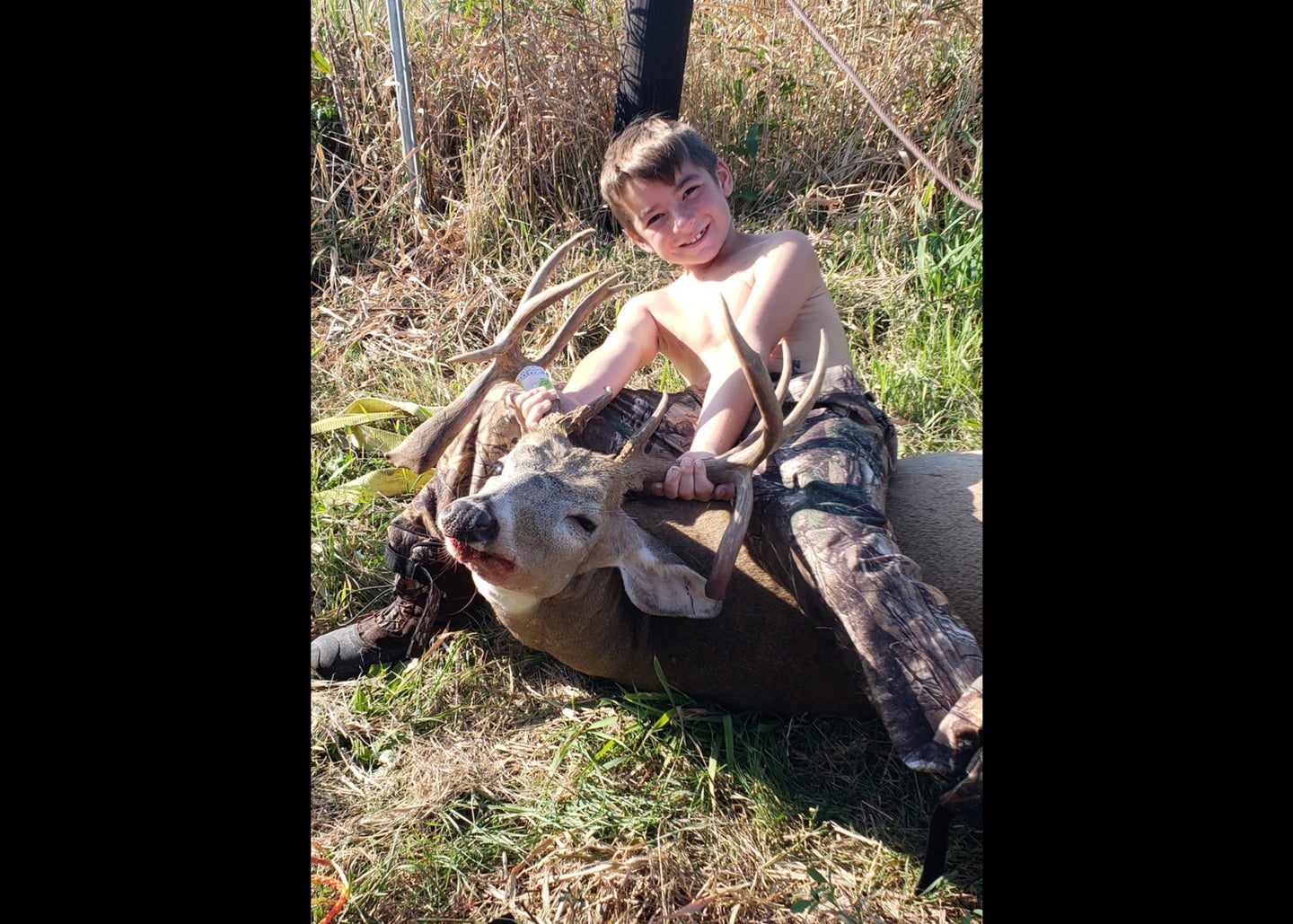 Lovell took the buck with a rifle chambered in 350 Legend. Clyde Lovell
SHARE

Eight-year-old Logan Lovell made the most of his opportunity to harvest an Iowa whitetail buck when he tagged a 12-pointer with three drop-tines on September 18, just two hours into the state’s youth season opener. Logan was hunting with his father Clyde Lovell on public land in Benton County when he completely missed his first shot at the buck, which had stepped into a clearing 50 yards from his tree stand.

“I thought it was a really good deer, so I really wanted to shoot it,” Logan tells F&S. “Whenever I go to shoot at any deer, I get really bad buck fever. So that’s why I missed the first shot. I was shaking too much.”

Logan and Clyde had spotted a group of whitetails moving toward them around 7:30 a.m., but they didn’t get a good look until the deer were 75 yards away. Four does appeared first, followed by a 4-pointer, and, finally, the big 12-pointer. “I told Logan: ‘Get ready, this is a shooter,’” Clyde recalls.

Logan’s first shot was a clean miss, but to his and his father’s surprise, none of the deer ran. “They basically froze in their tracks,” Clyde says. “I told him to shoot again, and I put my arm across the shooting rail of the tree stand so he could rest his gun on my arm.”

With his father’s encouragement, Logan—a deadeye at the gun range who regularly hits the bullseye at 100 yards with his Great Lakes 350 Legend Rifle—lined up shot number two and took it. The moments that immediately followed were tense. Clyde thought the shot may have been a bit far back, so they waited 45 minutes before starting to trail the buck. At the site of the shot, “we found zero blood,” Clyde says. “I could see right where the deer had taken off into the tall weeds, so I started looking for blood there—nothing.”

This was Logan’s second year of deer hunting. Last year, using a muzzleloader during the early youth season and hunting entirely from the ground, he missed five does before successfully harvesting an 8-pointer. “He’s pretty quick to get down on himself,” Clyde says. “Right away he said, ‘I missed him, didn’t I, Dad?’ I said, ‘I don’t know buddy, let’s just keep looking.’”

Heading in the direction the deer ran, Clyde stopped about 20 yards into the search. Logan ran to catch up. “He got up right beside me,” recalls Clyde. “He just kind of looked at me, and then he looked around for a second and got a big smile and said, ‘Yeah, there it is!’ He thought he was showing me the deer, that he had found it first, and that added to the excitement.”

“My dad saw him but he didn’t tell me,” says Logan. “Then I ran up to him, and I was just really excited. Right away I jumped on him and lifted up his head so I was able to count all the points.”

The two were in for a surprise. When Clyde had first spotted the 12-pointer, he didn’t realize it was a drop-tine buck. “I thought it was velvet hanging off his antlers,” he explained. “I could just see stuff hanging down and I thought he was still shedding velvet.” Logan said he’d only ever seen drop-tine bucks “on YouTube, not in real life. It’s pretty cool.”

Hunting is a Family Affair for the Lovells

The Lovells are an avid outdoors family. Logan and his brother TJ, 11, love to compete with each other when they hunt, fish, and target shoot. One wall of the family’s home in Keystone, Iowa, features three whitetail mounts: Their mother Sabrina’s first buck and two of Clyde’s archery bucks. Clyde hasn’t filled a tag in years, though; Since Logan and TJ have gotten old enough to hunt, he and Sabrina spend all their time in the field teaching them. In fact, a week after Logan harvested his buck, TJ took an 8-pointer from the same stand.

“The two of them keep me moving,” says Clyde. “It’s amazing to see the boys progress on each hunt. It’s pretty tough hunting on public ground, but we make do with what we’ve got. It kind of opened both of their eyes this year, getting nice bucks. They are there, but you gotta work for them.”

Clyde says he’s learning along with his sons and is looking forward to their next hunt. “I also suffer from buck fever that’s terrible to this day,” he says. “Fortunately, TJ doesn’t get buck fever at all. That kid is just calm as can be. Logan and I shake, even after the deer is shot. I really need to pay attention to that and try to calm him down and talk him through it a little bit more. Hopefully, we’ll have many more chances to come.”

And likely, they will. Iowa’s archery season is set to open on October 1 and early muzzleloader will follow on October 16. TJ will bowhunt this year for the first time, and Logan will try to best his 12-pointer with a muzzleloader tag. Clyde will be right there every step of the way. “It’s all about getting them ready to do it on their own,” he says, “and someday teach their own kids.”