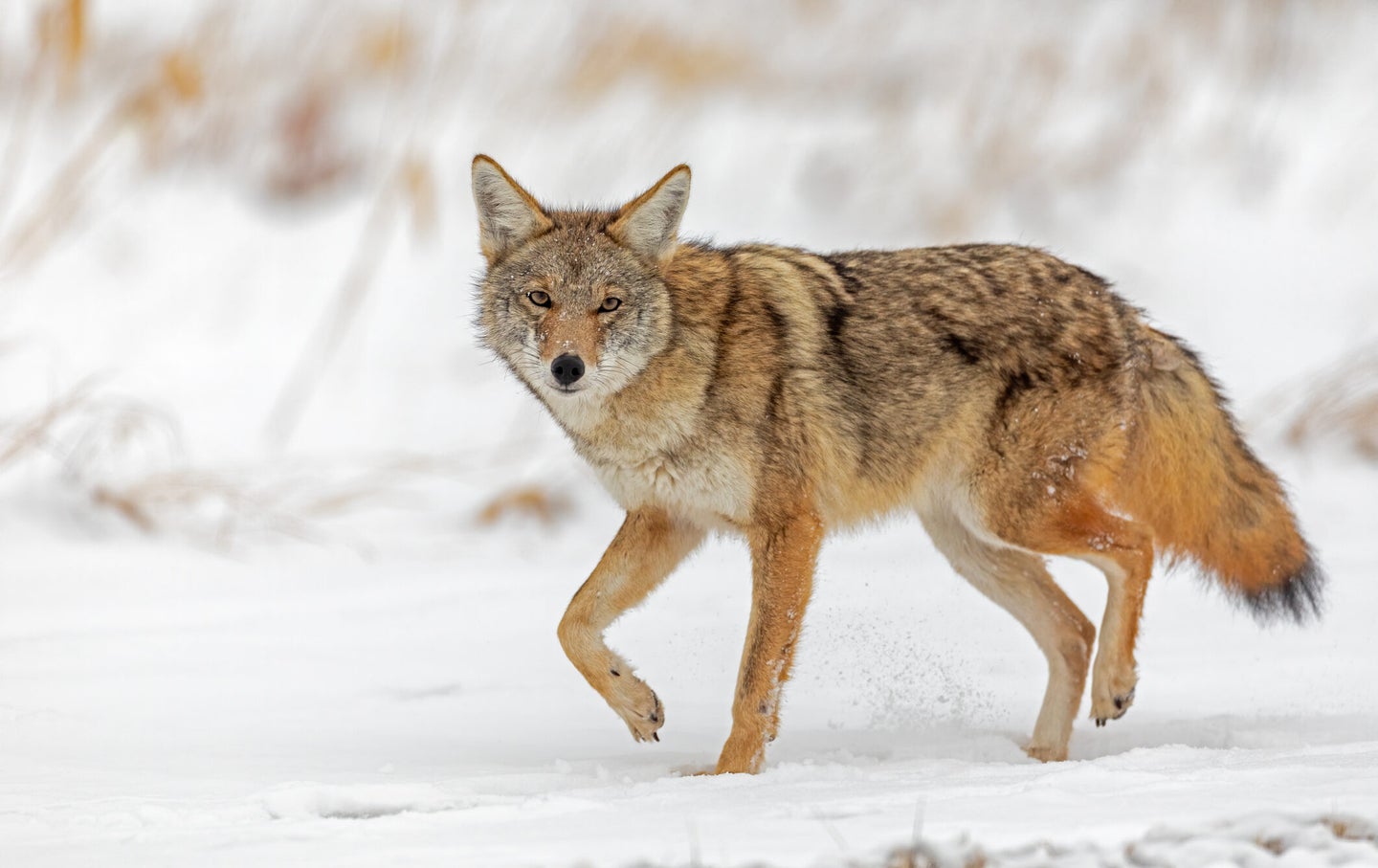 Well-known whitetail expert Don Higgins felt he had too many coyotes on his Illinois property this winter. So he invited the predator hunting experts from Team Radical Outdoors to see if they could help. The three-man crew took out 14 coyotes in a single night, proving both that Higgins’s property did indeed host a lot of song dogs and that these guys clearly know what they’re doing when it comes to predator hunting. F&S reached out to TRO’s Justin Roepke to get his top tips for putting more coyotes on the ground in late winter.

Most budding coyote hunters completely underestimate how sharp a coyote’s nose is, according to Roepke. “Those of us who hunt mature whitetails all fall appreciate how good a buck’s nose is. Well, a coyote’s sense of smell is exponentially better. If you’re not set up on the downwind side of the cover you’re calling to, you literally don’t have a chance. I don’t care what kind of scent-control measures you’re using, a downwind coyote is going to smell you every time.” A lot of hunters will get blanked at a spot and think it’s because there isn’t a coyote there, Roepke explains. “But it’s more likely that a coyote started to come to their calls, smelled them, and tore out of there. The hunt was probably over before it started.”

Roepke positions himself with a good view of the terrain between his setup and the cover he’s calling to, with the wind blowing into, or at least across, his face. “I typically use an electronic caller, and I’ll set that up between me and the timber. We always assume a coyote will try to get downwind of that caller, and so we set up our shots accordingly.”

2. Keep Your Calling Simple and Start with Low Volume

There are many different calls that can bring a coyote running, but Roepke urges hunters not to overthink it. “Any prey-in-distress call works this time of year because coyotes are pretty much hungry all the time,” he says. “It’s also breeding season, so coyote sounds are effective as well.” What’s more important to Roepke is matching the calling to the conditions. “Where a lot of guys go wrong is starting too loud. If you slip up to a little block of timber and blow a prey distress call at full volume on a calm night, you’ll freak out more coyotes than you’ll call in. It’s always easier to build volume than it is to back off if you’ve started too loud.”

Roepke typically gives each setup 15 to 20 minutes if conditions are good. “In most cases, if they haven’t come in during that time frame, they’re either not there or not coming,” he says. “That said, on a warmer night or if your setup allows you to cover lots of ground, sticking in there for another 5 or 10 minutes gives a coyote coming from a distance some time to get there.”

3. See and Shoot More Coyotes by Hunting at Night

While Roepke kills plenty of coyotes during daylight, he recommends waiting until dark if you have the right equipment and if it’s legal to do so in your area. “If we have a 12-hour hunt during daylight, five coyotes is a really good day,” he says. “If we do a night hunt, it’s not unusual to kill 15 coyotes if we’re on good ground. Coyotes hunt actively all night, so calling one into an open field then is a lot easier than it is during the day, when they’re used to laying up and sleeping.”

Night hunting requires some specialized gear. Roepke and his TRO crew are  equipped with night-vision and thermal-imaging scopes and scanners that allow them to spot and target incoming dogs without being detected. “We use Pulsar equipment, and it allows us to be completely invisible,” he says. “But it takes some experience to get used to”

While most guys aren’t prepared to invest in such high-end equipment, Roepke says that infrared scopes and lights (as well as conventional lights) can also work, provided hunters understand that coyotes can see the “red” in IR lights, and so they should only light up a coyote when they can hear or see it approaching. Hunting under a full moon can work well too; if conditions are right (snowy background and light wind), you may not need any lights at all on a bright night.

4. Get an Accurate Coyote Rifle and Practice a Lot

One of Roepke’s top rules is to avoid educating coyotes, and the best method to achieve that is to make the shot when a dog responds to a call. “It’s not enough to know your rifle and how to shoot it,” he says. “If putting a crosshair on a coyote and pulling the trigger was all there was to it, almost no one would miss.” You need to know your bullet drop precisely at different yardages, practice when it’s windy, and always use a good tripod, he stresses. “If you’re using a cheap tripod, it cancels out any investment you made in a high-dollar rifle, the best e-caller on the market, or pretty much anything else.”

Roepke typically shoots a bolt-action Ruger Precision Rifle in .243 and handloads all his ammo (70 grain Nosler Ballistic Tip). As someone who participates in coyote tournaments every weekend with his team and travels widely to hunt for fun, Roepke takes accuracy very seriously. “My rifle shoots ¼ MOA at 100 yards. Most factory ammo shoots 1 MOA at that distance, which is good enough for most people who only hunt occasionally.” But more accurate ultimately results in more coyotes.

Just as important, Roepke says, is communication while hunting in a group. “We almost always have two or three guys, just because it’s more fun to hunt with buddies,” he says. “But everyone has to understand who shoots what and where. If you have three guys in a line and a pair of dogs comes running in, the guy on the left shoots the dog on the left and the guy and the right shoots the one on the right. Sounds like common sense, right? Well you can’t believe how that simple system can break down if guys don’t discuss and agree to it beforehand, especially on a cold winter night hunt when the coyotes come running in hard.”