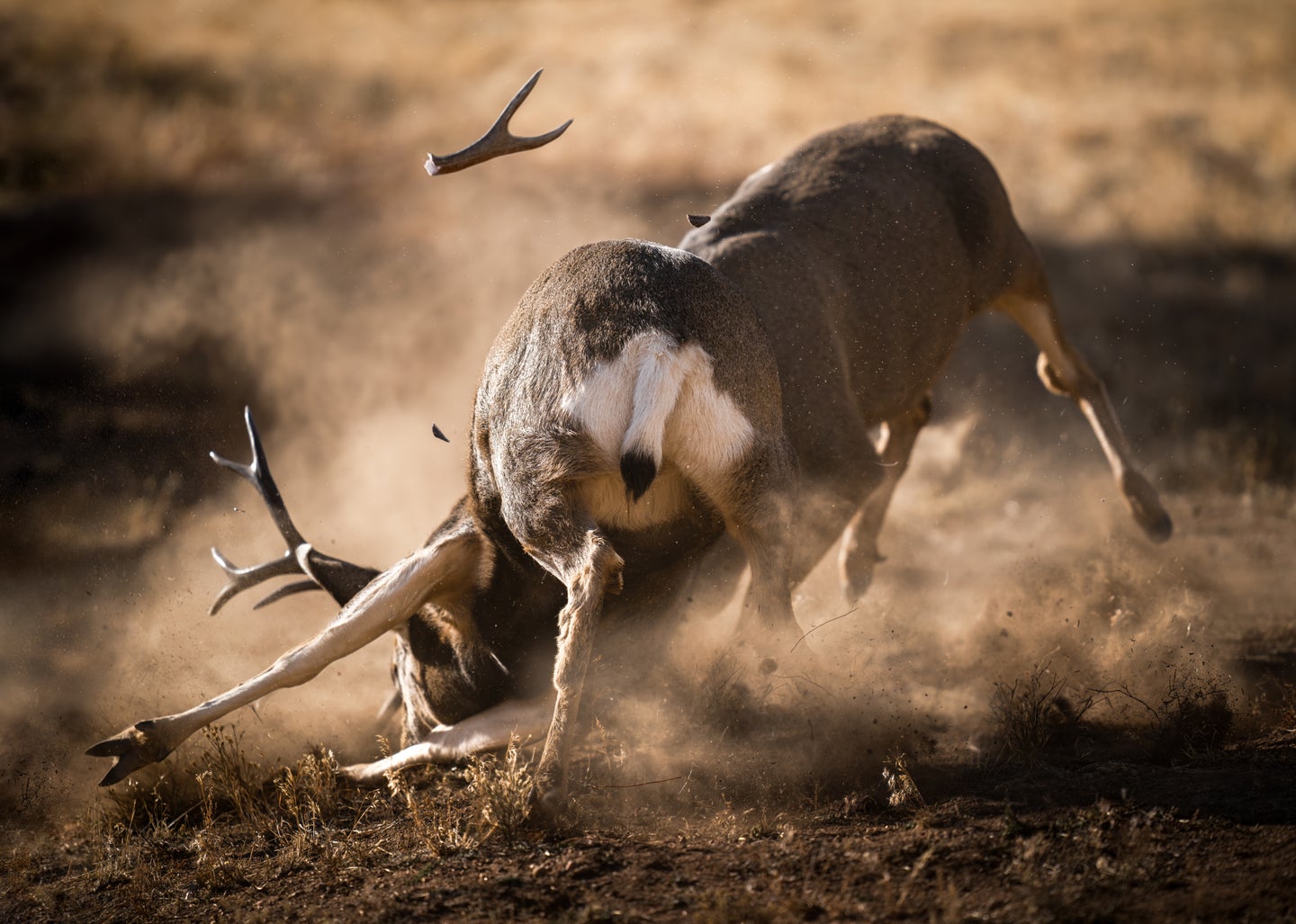 Two mule deer pitched a rut battle royal in November, and wildlife photographer Mitch Bainter was there to document the moment when the fur and antler tips flew. Shooting a digital camera equipped with a 400-millimeter lens, Bainter captured a series of remarkable images that shows just how fierce these fights for dominance and breeding rights can get.

Bainter began photographing wildlife in 2018 with his father, Gary. The duo posts their work on Instagram under the name Creekbed Photography, and they primarily shoot within a 90-minute drive of their home in Greeley, Colorado. Bainter was in Estes Park on November 18 when he encountered a big 4×5 muley he had some history with. “He’s a sweet buck, just a real unique deer. I recognized him from previous years,” he says. “He’s got this kicker off his back fork that points straight backward. I’ve never seen anything like it. I actually saw him last year but wasn’t able to get any photos, so I was excited.”

Urban deer are not unusual in towns across the Rocky Mountain Front Range and often make themselves at home in office parks, front yards, and other highly visible areas without hunting pressure. Bainter located the big 4×5 in a residential neighborhood. He was snapping photographs of the big buck nosing around 8 or 9 does, when he noticed an older buck crossing the road several yards away. He didn’t have any history with the old buck. “You could tell he was far past his prime,” he says of the 4×4, which had a spindly rack compared to the 4×5. “But he was real rutty looking: Swollen neck, all puffed up, ears pinned back. All the good stuff.”

The big 4×5 left his does and headed across the road in the direction the old buck had gone. “I’m like, ‘Ok, this might get interesting,’” says Bainter, who was accompanied by his girlfriend. “So we drove around and kind of followed the buck through the neighborhood, and he circled around behind a house and came up beside the house.”

On the front porch of the house stood the old buck and a doe, both munching Halloween pumpkins. “It wasn’t glamorous,” Bainter says, laughing. “It all happened in someone’s front yard, actually.”

The two bucks spotted each other and things got serious. “As the big buck came around the side of the house, he got all swole up, and the buck on the porch got all swole up and cruised down the porch ramp. Usually, muleys will square up and kind of walk around each other a little bit, but these guys didn’t really do that. They got right up next to each other, locked antlers real slow, and then they just went at it.”

Crashing antlers loudly and kicking up sand and dust, the bucks clashed, pushing into a homeowner’s yard past a swing set and playhouse and getting so close to Bainter at one point—within 30 yards—that his telephoto lens couldn’t frame the whole scene. When that happened he says he lowered the camera and enjoyed the show for the moment.

Bainter says the battle was the second-best of the many awesome mule deer fights he’s witnessed, but one image (pictured above) he got is second to none. “It’s my favorite image I’ve ever taken. I watched the tine break off in camera. I kept taking photos, but I was thinking to myself, no way that just happened. The bucks had to have kicked up a stick or something. But when it was over, my girlfriend goes, ‘Did you see that antler fly off in midair?’”

Bainter quickly scrolled through his shots and was thrilled to find he’d captured the moment when the forked tine hangs in the air above the tussling bucks, with two small flying antler chips also visible. “I was so excited. I called my dad and was sending screenshots off the back of the camera,” he says. “People say it’s a phenomenal image, but holy, cow, there’s no way you can plan for something like that. It was luck. I just happened to be pressing the shutter when it happened.”

As it turns out, the younger buck got the worst of the brawl. With the homeowner’s permission, Bainter recovered the busted tines and determined that the fork, one of the antler tips, and a kicker all belonged to the 4×5. The older buck only lost one antler tip and ended up driving his bigger, younger rival off. “He chased him a good half mile at least, and when we came back later, the old buck was bedded with the group of does the big, young buck had started with,” says Bainter.