Bulk Up Your Diver Spread With Old Mallard Decoys

With a little time, some paint, and a few old decoys, you can add numbers to your diver spread 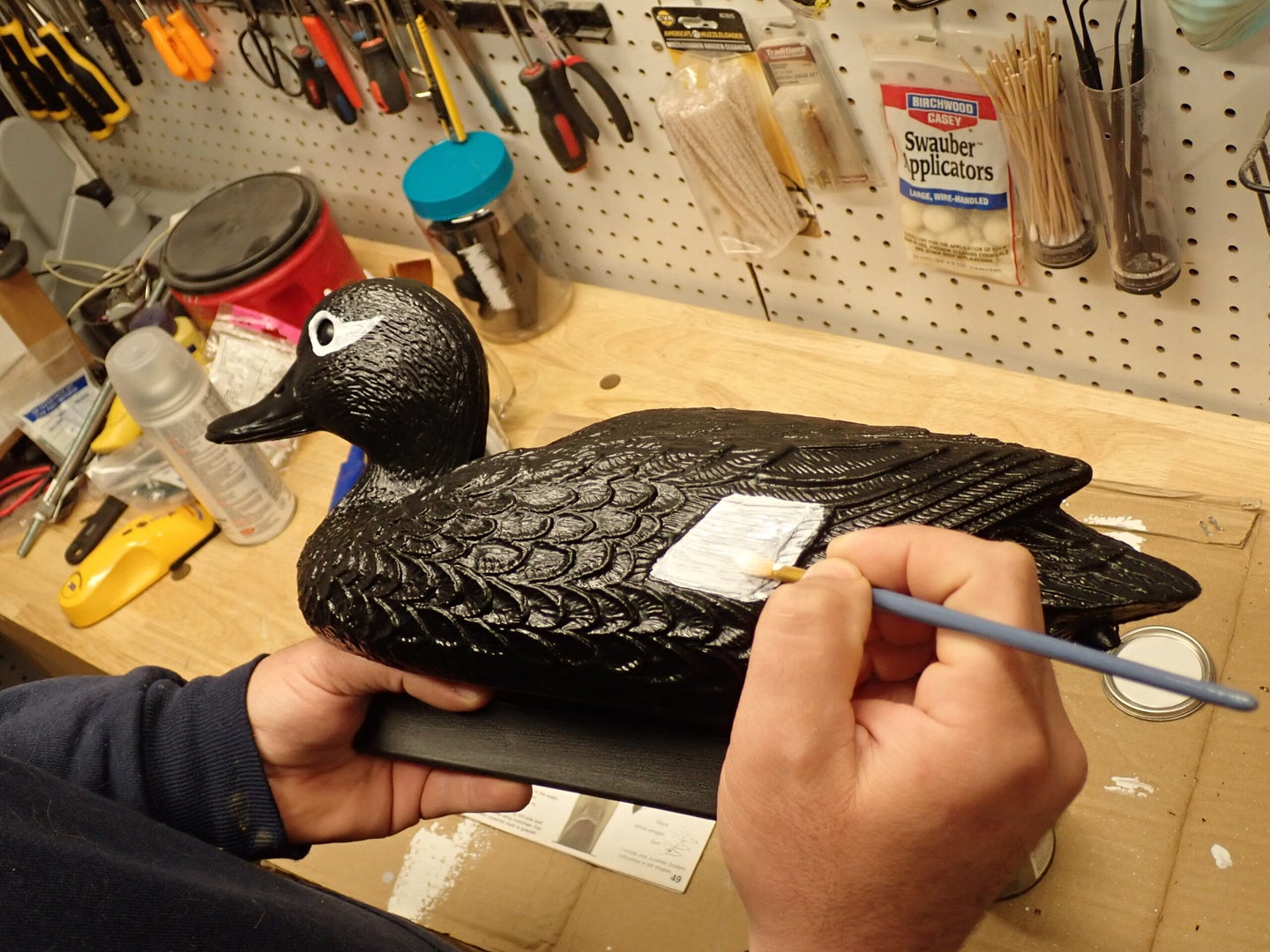 You don't need a lot of detail to fool a duck. Joseph Albanese
SHARE

Sometimes less is more, but that is rarely the case with divers or sea ducks. Scaup, scoters, and redheads all find comfort in numbers. In areas where they are prevalent, you’ll find them rafted up in the hundreds or thousands. To effectively decoy divers, you’ll need to give them a reasonable impression of these large groups.

Unfortunately, decoys aren’t cheap, and imitating giant rafts of ducks can cost a mint. But if you have a bunch of old mallard decoys lying around, you can convert them to divers to bulk up your spread quickly and cheaply. While these won’t be as realistic as the excellent fakes on the market these days, they will give you the numbers you need to draw ducks on big water.

To add to my sea duck spread, I’ll be converting a bunch of old Flambeau mallards into white-wing scoters using a simple paint job that maximizes visibility while giving the ducks some familiar marks to key in on.

First, Identify The Field Marks on Your Target Birds

To identify birds at a distance in the wild, ornithologists use patterns, colors, and other distinctive features known as “field marks.” Experienced bird watchers can ID a bird from impressive distances using a couple of key markers—much the same way diving ducks cruising along at up to 70 miles per hour do with other ducks.

When converting your old mallard floaters to diver duty, you don’t need to give them a paint job Roger Tory Peterson would approve of. Old-timers who hunt near Long Island still regularly employ “black and whites,” or retired crab pot buoys painted black with a couple splashes of white for visibility. Old-school diver hunters on the Mississippi employed similar tactics for canvasbacks and scaup, substituting tarred milk jugs for buoys. For your re-painted mallard decoys, you only need to provide enough key features so ducks can identify your imposters as members of their own species.

Emulating the characteristic blue bill and gray back will lure passing bluebills. Dekes painted with crimson heads will draw in canvasbacks. A bright white patch on the head of a converted mallard will get buffleheads to dump in. For the white-winged scoters I’m working on, I’ll paint them mostly black and add some white details near the eye and speculum.

Get Some Reference Materials

The LeMaster Method was required for the waterfowl ecology class I took in college, and I’ve held onto the book ever since. The pocket-sized guide highlights the field marks of each duck, giving you a reference that can help with duck ID in the marsh and at the workbench. Each page also contains notes on things such as flight characteristics to further aid in identification. Grab yourself a copy, and you’ll have a good paint-scheme reference for a variety of ducks.

1. Give Your Old Decoys a Thorough Cleaning

To get your decoys ready for their new paint job, you need to remove any dirt or other impurities from their surface. Trisodium phosphate, better known as TSP, was the cleaner of choice for all things used outdoors for years. The powerful cleaner cuts through grease, grime, and organic junk with ease. But as the name suggests, the compound is loaded with phosphates. When these get into the waterways, they create harmful algal blooms. Borax is a good alternative, and it doesn’t wreak havoc on the environment. You can find Borax readily in the supermarket, where it’s sold in the laundry detergent aisle.

Create a slurry with the Borax and a bit of water in a small bowl. Apply the paste with a scouring pad, using a scrubbing motion. Be gentle; you’re not trying to take the old paint off, just remove anything stuck to the surface. But if you do encounter some peeling paint, give it a little more elbow grease to get it off. If necessary, use fine-grit sandpaper to take those sections down to bare plastic and give the paint a texture to adhere to. Rinse with plenty of warm water and let the decoy dry.

2. Apply a Base Coat of Paint to The Decoy

When Krylon came out with their line of Fusion paint for plastics, I thought it was a gimmick. But after using it to camo kayaks for years, I’m a believer. The durability it’s shown on boats that have been rode hard and put away wet makes it a great candidate for decoys. With plenty of natural hues available, you can find a close approximation to the color of your target duck at your local hardware store.

There are a variety of finishes to choose from: gloss, satin, and matte. After going back and forth between matte and satin over time, I’ve settled on the latter. Satin offers just enough sheen to make decoys pop on overcast days, but not so much that they have an unnatural glow when the sun is blazing. If satin proves too shiny for your tastes, you can always give the decoys a coat of Krylon 1311 matte clear coat to dull the finish.

Start by spraying the entire decoy with your base coat. In the case of my white-wing scoters, that means satin black. To achieve an even finish, slowly sweep the paint across the decoy, taking a little more than a second to get from tip to tail. To avoid clumps, start spraying before you reach the decoy and continue until you pass over it. Slightly overlap each pass to ensure you don’t miss any spots. A few thin coats are better than one thick one, so if the existing paint shows through, let the spray paint dry and give it another go.

Scoters only require a single color, but if you were to paint bluebills or other species with more than one primary hue, add it once the first has dried. You can mask off the areas using painters’ tape, but that’s probably more trouble than it’s worth for simple gunning dekes. Just freehand it, estimating the edges. Remember, it doesn’t need to be perfect—just provide an impression of the ducks you’re trying to imitate.

3. Add Detail to The Duck Decoy Body and Head

You probably haven’t studied fine art, but you don’t need to in order to add a little detail to your dekes. Features such as bill color and speculums (the colored portion of the wing) can be easily replicated with a couple of brush strokes. Again, they don’t need to be realistic; it’s probably to your advantage to exaggerate them a bit. Use Rust-Oleum matte enamels in the appropriate colors for these, and apply them with a cheap artist brush from the same home improvement center where you got the paint.

The most identifiable colors on white-wing scoters are the white speculum feathers and the comma shape on their eye, both of which only require a couple strokes of white. I’ve omitted the colorful bill; it’s quite striking in hand but all but disappears when the birds are riding the waves.

Read Next: Active Duty Marine Starts a Decoy Company Unlike Any Other

Small spreads are best set with individual anchors. But when you’re setting several dozen decoys at a time, consider long lines. This rigging system takes its cues from a method employed in commercial billfish fishing operations. It uses a long line, also called a mainline, to which large numbers of decoys are clipped. One, or both, ends of the mainline are anchored, keeping a dozen or more decoys in place. This system allows you to deploy a few dozen decoys in the time it would take to set a few singles.

There are a few different ways to rig long lines, but most involve short droppers that attach the decoy to the mother line. You can make your own using about 140 feet of #120 tarred nylon line for the mainline, and three-foot sections of #60 for the droppers. Attach one end to the decoy using a snap swivel, and the other to the mainline using a so-called long line clip.

You can use just about anything for weight, with sash weights taken from old windows being the traditional favorite. I prefer collapsible kayak anchors because the flukes will grab sandy bottoms to keep the lines in place in swift currents. If you’d rather buy everything already set up, contact Doctari Long Lines. Whether you choose pre-made rigging or make your own, your freshly-painted decoys will be right at home on a long line in your diver spread.