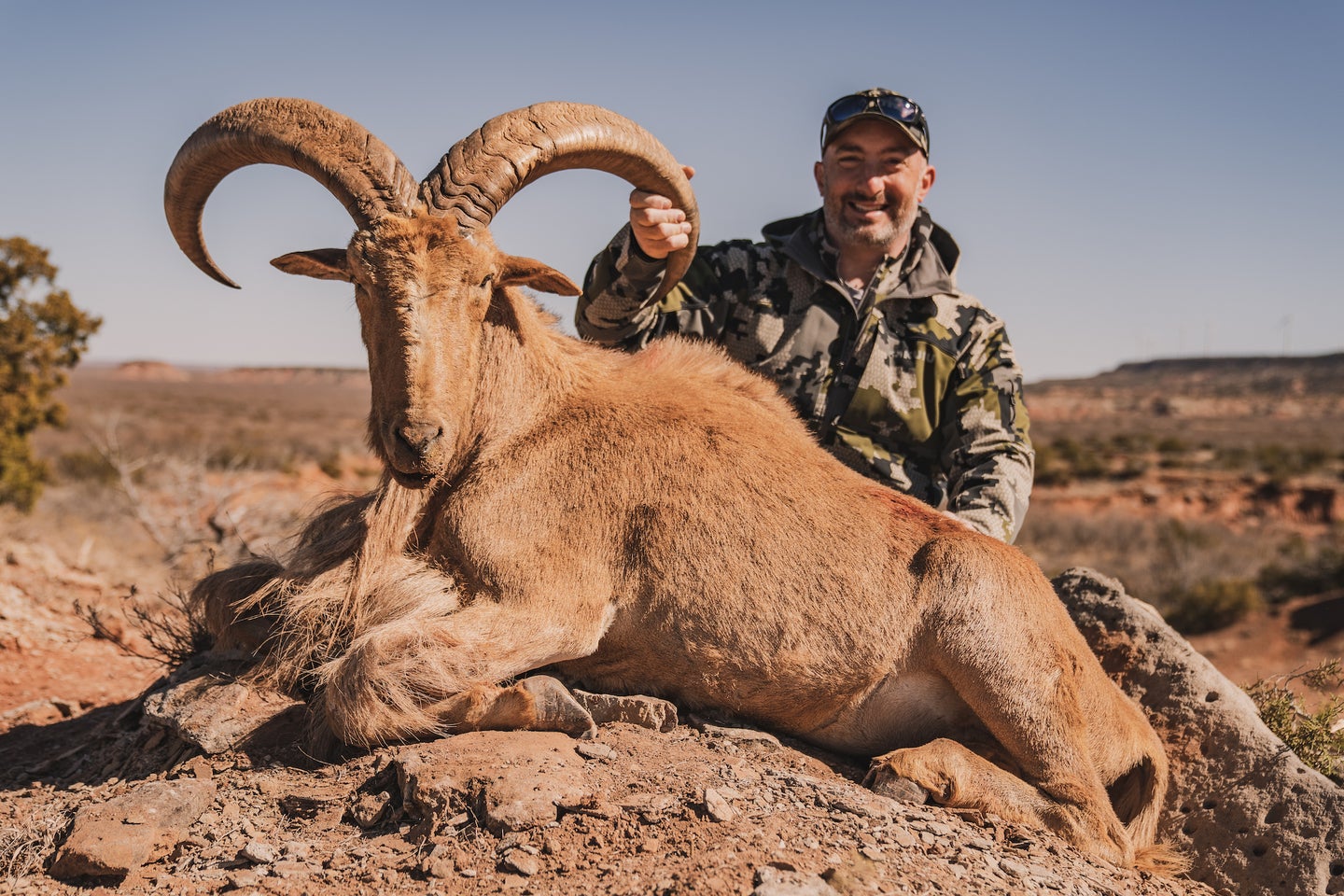 The author with a mature aoudad ram he took in Texas' Capstone country. Jake Dahlke
SHARE

Unexpected. That’s the one word comes to mind when I think about the last year or so. I know that sounds a bit understated, given all we’ve gone through, but it seems to fit. While the time since the pandemic spread around the globe has been numbing, there have been some bright points too. One of those unexpected experiences was a chance to go to Texas to hunt wild aoudad sheep with a new rifle.

Normally, air travel is such a regular part of my work that I don’t give a second thought to boarding a jet—or a bush plane—with a gun and my gear, but I realized that when the day came to fly to Dallas that I hadn’t entered Bozeman’s airport in over a year.

I stood in the terminal looking around and blinking with an expression that didn’t scream “intelligent” as I tried to figure out where to get in line.

That fish-out-of-water feeling was dispelled a bit that evening as I settled into a really fine old-fashioned made by the bartender at the restaurant in the lobby of Grand Hyatt at DFW. To verify my impression I ordered another, since everyone knows a sample size of one is not valid. I sipped on it while waiting for my steak to arrive. All for science.

The following day, I jumped into the rental my buddy Tim Brandt procured—a black Escalade with dark tinted windows and Florida plates. I figured we wouldn’t make it out of the Dallas metro area before we got lit up by a patrolman’s flashers and had police dogs crawling all over our bags.

Somehow, we eluded the long arm of the Texas law and drove several hours straight west, past Abilene, to my favorite place on earth: the middle of nowhere.

The closest town on the map was Fluvanna. You want to mess with someone, tell them you’re hunting aoudads in Fluvanna. Who’s gonna buy that line? I wouldn’t. None of my friends who live in Texas had even heard of the place.

And, to be honest, I couldn’t tell you a thing about Fluvanna because I never saw a lick of it along the final long stretch of dirt road that led to the rusty gate in front of the ranch bunkhouse where my hunting companions and I would spend the next few days.

I needed to check the zero on my rifle, so I walked to the makeshift range that had been set up in a cow pasture next to the house by Miller Valentine. The range consisted of a folding chair and card table placed 100 yards from a weathered piece of plywood with peel-and-stick targets plastered on it. (To learn more about the rifle, see my review of the Savage Impulse straight-pull.)

The land he hunts belongs mostly to his family and immediate relations—of which there are a pile—and consists of more than 50,000 acres.

Like all wild sheep, aoudad have an affinity for rocky, rugged, broken ground. Through the wonders of evolution, aoudad developed the ability to extract the water they need to survive through the plants they eat, meaning that bone-dry country is their happy place.

And if there was one thing this part of Texas had in spades, it was bone-dry country.

My first couple shots landed close enough to the center of the 100-yard target that I figured I was good to go.

To the north of the bunkhouse, I could see a line of cliffs across the horizon on top of which windmills were visible, their blades churning out electricity with each revolution.

I was starting at a piece of the Caprock Escarpment, one of the more stunning geographic features in Texas. Those rugged highlands mark the boundary between the high plains of the Llano Estacado and the lower elevations to the east and run roughly 200 miles down the Texas panhandle starting at the border with Oklahoma.

In the 1800s it was a dangerous place to be. The Comanches ruled that territory and raided with near impunity until their defeat in 1874.

We drove up there the next morning to look for aoudad. We parked at the base of one of those massive windmills. The tips of the blades sliced the air at about 180 mph, giving off a hellish shriek each time they passed overhead.

We walked to the caprock’s edge and glassed the arroyo that stretched between our rock wall and another one facing us about 1,200 yards away. The cattle in the bottom were easy to spot. The aoudad were another matter. Their reddish-brown coats were a perfect match for the local dirt and it took us 45 minutes before we laid eyes on a small group of ewes nearly a mile away.

We picked up and moved to a new spot and repeated the process. I was so absorbed by the glassing that hunting wild aoudad entails that I didn’t pay attention to the strong Texas sun beating down on my ears and neck and ended up paying for the lapse with an industrial-strength sunburn for the next few days.

But that discomfort was still in the future. For the meantime I was just grateful to be able to spend hours on my optics looking for a ram.

At the end of the day Valentine spotted a bachelor group of stud rams that were unfortunately off the property we could hunt. A classic situation where the horns are bigger on the other side of the fence.

We spent the next day doing much of the same. Glassing from atop the capstone formations. Baking under the warm Texas sun. And spotting some great rams at last light.

One thing I came to appreciate was the wind. Of course, being in the midst of a windmill farm is what big city detectives refer to as a “clue” but even so the sustained 45 mph blasts I registered on my Kestrel caught my attention. That had the potential to turn an easy shot at moderate distances into a complicated affair.

The rams we spotted as the sun went down were on the ground we could hunt. One was a great shaggy beast with a hide the color of chocolate, and his buddy had long, sweeping horns and a golden-hued coat. We watched them through our spotters and binoculars for more than an hour as they grazed in the wide flat below our rocky perch.

Right before it got too dark to see, a third ram appeared. He was by himself, to the west of the pair we had been watching, and was moving through some thick cedars that made it difficult to get a clear look at him. But Valentine had seen enough to know that he, too, was a shooter.

The plan for the morning was simple. We arrived at the same spot before dawn and hoped the aoudad didn’t have any reason to wander far during the night.

We found the solo ram to the west first. He was more than a mile away, feeding among the cedars. He would be difficult to find in that thick stuff once we got down to his level, but by the same token we had a better chance to sneak in close without bumping him.

We lowered ourselves from the summit of the caprock and navigated the 300-foot drop to the bottom as quickly as the steep ground would allow. We exited from the base of the cliffs through a dusty creek bed that flowed with cactus rather than water.

We made a beeline toward the ram for about 20 minutes, crossing several arroyos and cutting through bands of dense cedars that covered our approach.

Once we figured we were within 300 yards of where we had last seen him, we switched to stealth mode. We low crawled from bush to bush, glassing hard before moving forward. After nearly an hour of this hide and seek, Miller spotted the arc of the ram’s horn in some brush.

Since we couldn’t see its body, we backed out and swung around to get a different angle.

I had a narrow shooting lane to the ram, which was bedded 180 yards away. The wind, which I had been worried about, had mellowed out to reasonable 10 mph breeze.

“When he stands up, he’s probably going to spin right around and disappear into the cedars,” Miller told me.

I took his words to heart as I watched the ram through my scope. And, sure enough, right after the ram stood he spun 180-degrees. I let him take half a step and put a bullet into his vitals through a gap in the vegetation. As soon as he cleared the cluster of cedars, I put another one in him and he stopped, and I shot him once more for good measure. All three bullets found their mark and he collapsed. Each of the 130-grain Terminal Ascent bullets were clean pass-throughs.

The horns on any mature wild sheep are something to behold, and the deep crescents on my aoudad were no exception. We didn’t put a tape to him—there was no need. I spent time staring at his age rings and admiring the scales and chips that his horns had accrued. The narrow gap and hardened boss between his massive bases said much more about his life than a number on a tape measure could ever convey. He was an old warrior, one that had lived a long time in some of the harshest terrain in North America.

Every animal I’ve ever hunted and killed moves me. The day I don’t experience that profound mix of joy, sadness and reflection when I lay hands on an animal whose life I’ve claimed is the day I’ll stop hunting. But that feeling sometimes hits harder than others, and this was one of those times.

I couldn’t tell exactly why. Those emotions do not come from a rational place.

It, too, was unexpected and caught me off guard—but not in a bad way at all.