Video: Watch a Black Bear Sow Get Her Cubs off the Streets

As hibernation comes to an end, encounters with black bears are about to rise 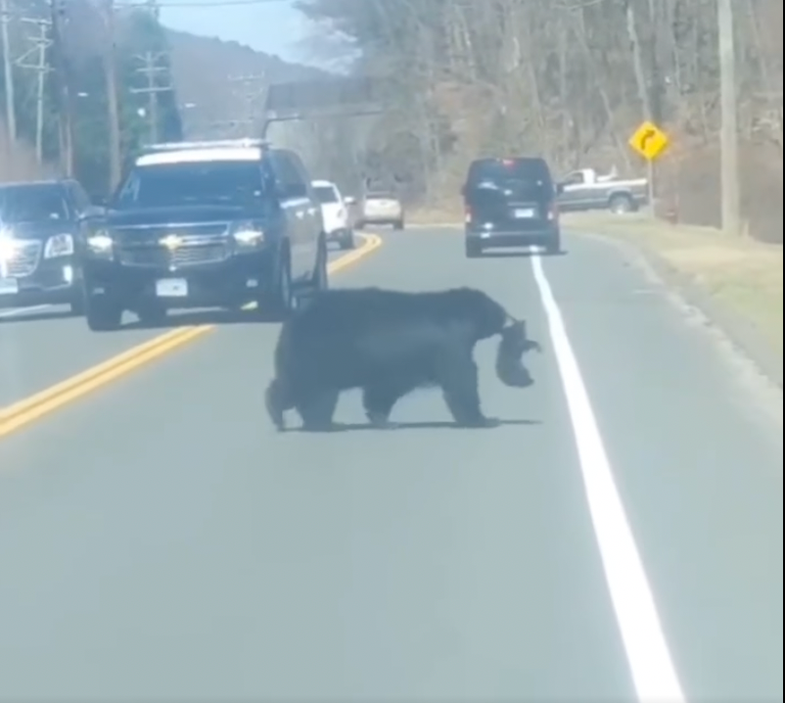 Sow black bear helps one of her 4 cubs across the road in northwestern Connecticut.
SHARE

A video of a black bear sow and her four cubs crossing a busy Connecticut road has called attention to an annual event: The emergence of bears from hibernation. Spring weather has awoken the bears from their winter hibernation, claims the Register Citizen. In the past few weeks, a number of bruins have been spotted in backyards in Litchfield County. “That’s the key to why they’re in the yard-easy access to food,” said Will Healey from the Connecticut Department of Environmental Protection Agency’s Wildlife Division. “This is certainly the time of year that people are having sightings. People are used to them, but it’s still important to remember how to live with black bears.”

Bears emerging from hibernation are hungry, and directly or indirectly feeding them should be avoided. “The worst thing you can do is intentionally feed a bear,” Healey said. Leaving food in the yard for bears is a direct approach, while indirect feeding comes from having suet or bird seed in a backyard. Torrington, Connecticut, resident Brenda Wilson encountered a bear in November as it was headed for its winter nap. “I thought it was safe to put a suet feeder out,” she said. “But one night I heard a noise and there was a black bear at the feeder.” The same rule applies when bears emerge in the spring.

Trash cans and grills are other indirect ways citizens indirectly feed bears. Suburban farmers with chickens, beehives, or fruit trees should equally exhibit caution. The DEEP says about 370 bear sightings have been reported in Connecticut so far in 2021. With so many sightings, they’ve devoted a webpage to black bears.

This video by the DEEP illustrates what to do. “Keep your dog leashed up when you’re in the woods,” Healey said. “That’s the best rule of thumb. People trust their dogs and let them run loose, but there’s been a significant number of incidents involving people coming across bears (in the woods) over the years, and any altercation has been precipitated by a dog encountering a bear. A bear with cubs that comes across a dog in the woods, they’re going to defend those cubs. If you keep the dog on a leash in the woods, it’s a great way to keep them safe.”

Back to the momma bear crossing the road: The Winchester Police Department told Klove News, “The weather is getting nicer and the wildlife is coming out to play. Please use caution while driving and avoid interacting with these animals.”