I Need Another Gun 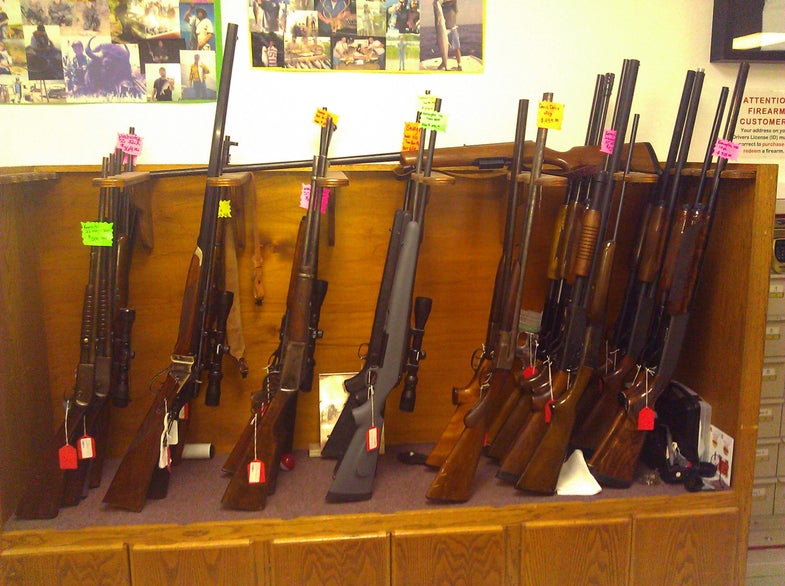 I have one shotgun, a 12-gauge Remington 11-87, which I bought after consulting T. Edward Nickens. When he said, “You want a Remington 11-87,” I thought it sounded like a kind of typewriter ribbon, but his recommendation was good enough for me. I bought one. It was the first gun I ever bought.

I soon realized that I would also need a deer gun. Being the thrifty sort, I was delighted to learn that one could buy a slug barrel for the 11-87, turning one gun into two. I opted for the barrel without the cantilever mount, mostly because I had no idea what one was. Besides, I was young and had excellent eyesight.

I currently live in Maryland, where shotgun slugs are the only legal ammunition during general firearms season for deer. I didn’t worry too much about this until a guy I’m desperately trying to suck up to because he has hinted that he might be able to get me on some hunting land, asked if I had a slug gun. “I do, but my muzzleloader’s more accurate,” I said. He waved that off. “No, we do a lot of drives. You need follow-up shots.”

Oh. I put the slug barrel on the gun and peered through the sights. In the time since I’d acquired the barrel, I’d been betrayed by my eyes. I could look at the sights—sort of—or I could look at whatever I happened to be shooting at. Not both. This would not do.

I do rash things—things I haven’t thought through—during deer season. I ran out and bought a shotgun saddle, a $50 fixed 4X scope, and rings. Altogether, it was about $120.

After about 11 hours, I’d installed the saddle and rings and was just about to tackle mounting the scope when I realized several things. Between my mechanical skills, the dicey-looking saddle, and all the ways one can screw up mounting a scope, it was unlikely that my slugs would land anywhere near where the scope was focused. What’s more, it slowly dawned that as soon as I got the scoped slug barrel in place—assuming I did get it sighted—I would immediately be invited on a waterfowl hunt and need to change barrels again. And that given all the variables in reinstalling the saddle mount, I would need to sight in the slug barrel each time I switched. This was not going to be a workable option after all.

I called a friend of a friend, a guy who knows guns, and asked his advice. “Well, you’ve got yourself into a pickle,” he said. “This is why I own 50 guns.”

I know that if I go out and buy a slug gun, mount the scope, and sight it in, the guy who hinted that he might invite me on a deer drive will fail to follow through. That’s just how the world works.

But it’s deer season, not the best time for rational thought. If I don’t buy a slug gun, it practically guarantees that I’ll be invited on a deer drive.

I don’t think I could stand having to turn that opportunity down, so I’m headed out to see what’s left at my local gun shops. I hear the Savage 220 and 212 slug guns are pretty good. Anybody favor one over the other?