You can’t beat the .270 Winchester or the .280 Remington. Which is better? Take your pick. 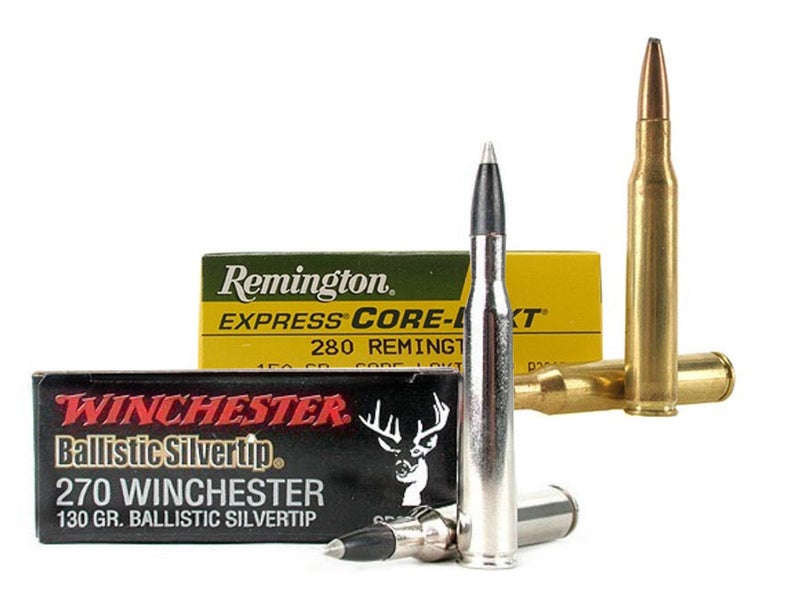 I have been asked: “Is there any significant difference between the .270 Winchester and the .280 Remington that would influence my choice of a perfect deer and occasional elk rifle?”

Let me put it this way: In 4.8 billion years, give or take a few millennia, the sun will begin to run out of hydrogen to burn. At this point it will grow into a red giant and will envelop Venus, Mars, and Earth. You could use those two cartridges on game from now until that date and not notice an iota of difference between them.

The .270 was developed in 1923. It was an odd bullet diameter and an odd concept for the time: a true high-velocity, big-game cartridge. Because it fired small bullets in a big-bullet world, the .270 caught on slowly. It was greatly aided by Jack O’Connor, who built a career on it, and Townsend Whelen. Elmer Keith, who continued to favor a camp stove at 2,500 fps, made a career out of detesting it.

People who tried it discovered that the .270 was flat-shooting, light-recoiling, and that it was effective all out of proportion to its ballistics, even with the ghastly bullets of the time. Thus it is today, but moreso, because bullets are infinitely better. If you want something more effective than a .270, you have to go all the way up to a .338.

My own .270 is a Montana Rifle Company model which they no longer make. I’ve had it 10 years and taken it all over and shot all manner of beasts with it. I use two loads: a 150-grain Swift A-Frame at 2,901 fps, and a 150-grain Hornady SST at 2,840. Both shoot into the same group from the muzzle to 300 yards. After 40-plus years of experience with the cartridge, I’ve settled on the 150-grain weight as the best all-around choice. They hit with more force than 130s or 140s.

The .280 has survived despite Remington’s heroic mismanagement. It arrived in 1957, and was chambered in the Model 740 auto, 760 pump, 721 bolt-action, and the 725 bolt-action (and what a lovely rifle that was). The cartridge made no sense in the first two rifles, which were for woods-sprayers; the 721 was moribund, and the 725 was soon to be discontinued. Also, the cartridge was underloaded.

Sales were dispiriting. The only people who appreciated how good it was were custom-rifle users. Jim Carmichel had a Clayton Nelson-built .280 with which he killed everything except unicorns, and gave the cartridge a big boost. In 1978 Remington renamed the .280 the 7mm/06 Remington. The shooting world was indifferent, so a few months later it was dubbed the 7mm Express. This caused people to confuse it with the 7mm Remington Magnum, and wonder why their cartridges rattled around in the chamber. And so, after allowing three years for everyone to become thoroughly confused, Big Green went back to .280, where it has remained to this day.

All this aside, the .280 is one of the two or three best all-around big-game cartridges available. Layne Simpson has called it “the .30/06 without the recoil,” and he’s right. The best bullet weights are 140, 160, and 175. The first is for small stuff, up to and including deer. The second is the best all-around choice. The third is for big critters.

My first .280 was built by Jim Carmichel in 1975, and I shot it so much that, between then and two years ago, I burned out the barrel. I retired it and got a Montana Rifle Company American Vantage rifle. It’s heavy for a sporter, but its heart-wrenching beauty won me over. (After all, Marilyn Monroe could have lost a few pounds, but who cared?) I have three loads for it: a 140-grain Swift A-Frame at 2,961 fps, 160-grain ditto ditto at 2,968, and 175-grain ditto ditto at 2,578. If there’s anything that can’t be taken with these three loads, short of really big stuff like Cape buffalo, it is not running loose on the planet Earth.

(I should say a word about the .280 Ackley Improved. I’ve had experience with only one, and that was dismal. I couldn’t get a significant increase in velocity over the standard .280 without blowing primers. It’s a perfectly acceptable cartridge, but if you feel you need magnum velocity in a .284 round, get a 7mm Weatherby Magnum. Not a 7mm Remington Magnum.)

So, to recap. There’s no practical difference between the two. Any distinction lies strictly on paper. They will kill any deer that ever snorted, and drop even the biggest elk in their tracks. Come to think of it, the elk that I’ve seen that were hit and escaped were shot with a .338, .300 Winchester Magnum, and a 7mm Shooting Times Westerner.