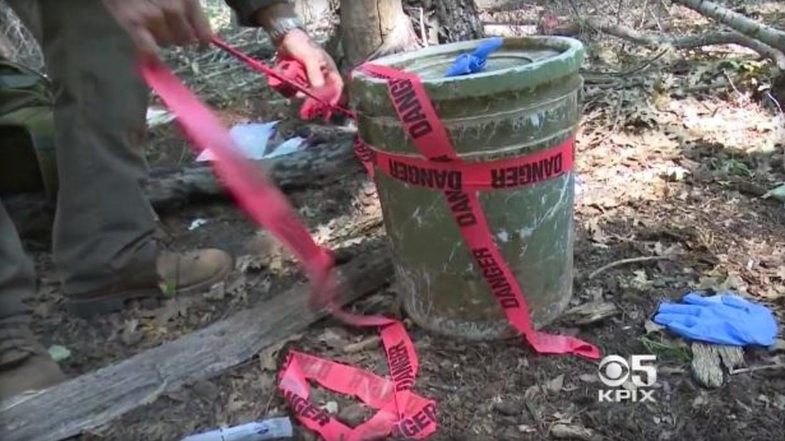 The pesticide is called Carbofuran and while the marijuana growing sites aren’t new, the use of this banned chemical is, and it has authorities concerned, according to CBS News.. It’s been found at up to 70 percent of the grow locations, and bears and other wildlife are turning up dead near the contaminated sites. Plus, there’s a concern for human health.

“A mountain biker, a hiker, a child, could be hiking out here, find this and think it’s a full bottle of vitamin water,” says Dr. Mourad Gabriel, Integral Ecology Research Center field agent. “An eighth of a teaspoon would kill a 300-pound black bear.”

The light pink liquid has also been found in forests of Oregon and Washington. No one is sure how long it holds potency in soil and water.

“The impact to wildlife and fisheries is a completely new frontier,” Gabriel says.

Illegal pot growers are also draining the country’s natural resources on forest land by siphoning large volumes of water. Farms with more than 15,000 plants use several plots across miles of land. Those plots are hydrated via a network of pipes coming out of natural water sources like rivers and springs.

According to Reuters, illegal growers can also leech chemicals into those waterways creating algae blooms and bacterial growth.

Wood is pushing for funding cleanup efforts, but budgets are falling short. Cleanup costs up to $100,000 and many sites are toxic enough to warrant hazardous materials experts.