Midwestern whitetail hunters have been battling warm weather that has stifled deer movement. High temps are typically the death sentence... 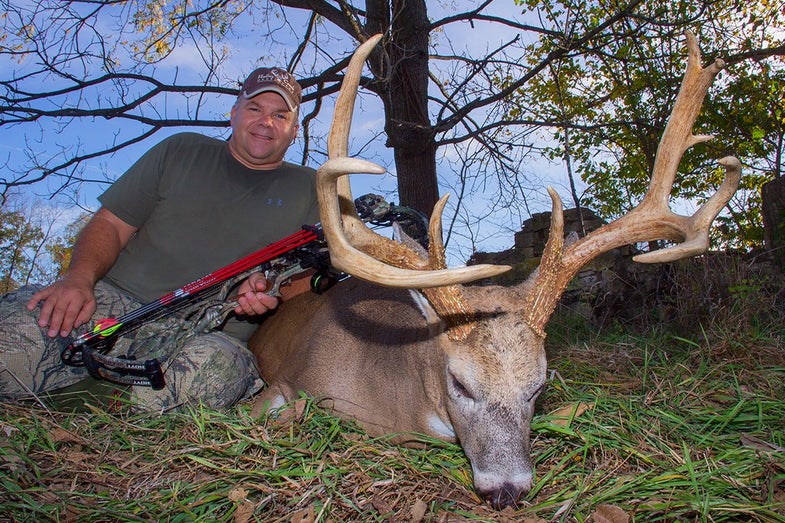 Midwestern whitetail hunters have been battling warm weather that has stifled deer movement. High temps are typically the death sentence for daytime buck activity during this part of the season, but Jeremy Ward didn’t have the luxury of waiting on a cold front. Ward, who guides for Hadley Creek Outfitters in Pike County, Illinois, burned some midday boot leather to get his client on a great buck.

“Afternoon temps were in the high 80s, but we had clients in camp,” he says. “I figured there had to be an active buck somewhere. I just had to work hard enough to find him.” Ward scouted secluded food sources until he found a cluster of big rubs in a stand of white oaks. “There was good feeding sign in the oaks, and there was a picked cornfield only 100 yards away. Even better, it was all close to bedding cover. I hung a stand that day, and showed it to a client the next afternoon.”

Ward said the bedding area was even closer than he thought. “The hunter, Jeff Poosch from Michigan, bumped a 125-class 2-year-old buck that was right by the stand when he walked in,” Ward says. “But he crawled up in the tree and settled in. Thirty minutes later the buck he bumped walked back in, followed by the 152-inch main frame 8-point in the picture.”

The successful hunt proves something I’ve long maintained about the much-dreaded “October Lull.” Somewhere, even under less-than-ideal conditions, a buck is not only feeding and laying down sign, but doing so in the daylight. Ward was willing to scout hard until he found the spoor that proved just that, and was able to send Jeff Poosch (who earlier this fall killed the potential record woodland caribou, and yes, he should immediately buy a lottery ticket while he’s on a roll) into a red-hot stand site.