In the Outdoor Industry, Regulations Are Job Creators, Not Job Killers

By now anyone who has paid attention knows that President Trump links the word “regulations” with the phrase “job killing.”... 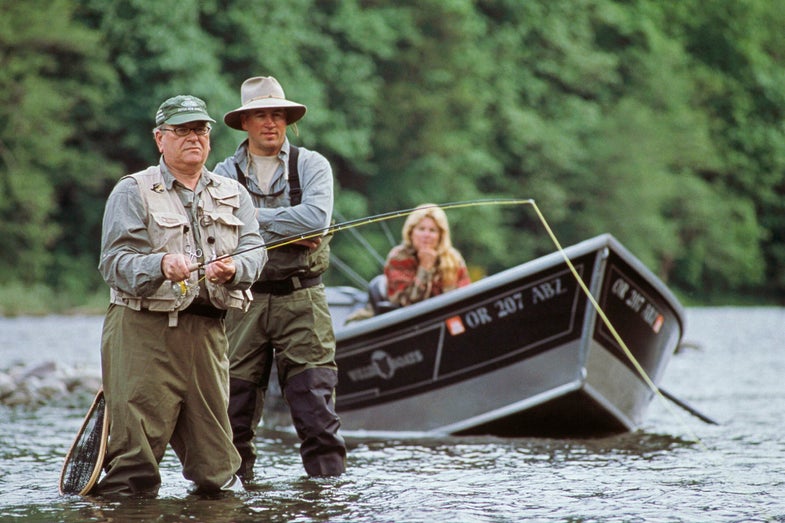 A fly fishing guide with his client. The outdoor industry, which accounts for more U.S. jobs than energy and coal mining combined, depends on environmental regulations.. mthoodterritory/flickr
SHARE

By now anyone who has paid attention knows that President Trump links the word “regulations” with the phrase “job killing.”

In fact, if you enter “Trump and job-killing regulations” into a Google search, you’ll get nearly 26 million hits in less than a second.

It’s the reason Trump and his supporters give for their desire to reduce environmental regulations—especially those involving protections for public lands and water, fish, and wildlife. And it’s the same reason they offer for expanded mining and energy development on public lands, and for changing the priorities at the BLM and Forest Service to give those activities priority over outdoors recreation, fish, and wildlife.

But research shows the president’s regulation-killing actions could actually cost the nation jobs and economic benefits.

That’s because many of the regulations he wants to repeal or dilute are actually job creators, not job destroyers.

In fact, many of them are essential to sustaining 7.6 million jobs in just one industry—more than all the energy and coal mining jobs in the country.

What is the outdoor industry?

Many people have a hard time equating “recreation” with “business”—much less “job creation” and “economic impact.” That’s understandable; when we “recreate,” the last thing on our mind is business.

Unfortunately, many lawmakers who are now deciding management policy on our public lands don’t recognize that these recreations are large and important business engines for the economy.

The latest report from the Outdoor Industry Association lays out the economic facts about the industry, which generates:

These businesses depend on large expanses of healthy public land and water carefully managed to ensure the qualities that support those activities. This means undisturbed natural ecosystems, some sections of solitude, balanced populations of fish and game within specific ecosystems, and well-maintained trails systems, parks, and camping facilities.

This doesn’t mean every one of the nearly 600 million acres of public lands—roughly 26 percent of the nation’s total—should be set aside purely for recreation. And, in fact, they are not. Only 6 percent are set aside as wilderness. The rest are largely managed for multiple uses, including timbering, oil and gas extraction, and mining activities.

The extraction industries and their supporters in Congress—including the president—often suggest that they have been locked out of these lands, especially by regulations and management plans enacted by the Obama administration.

The truth is the opposite. In fact, record amounts of energy were produced on public lands during the Obama administration, even as management plans were amended— after record public comment—to reflect better consideration for outdoors recreation, fish, wildlife, and ecosystem health.

Indeed, transferring federal lands to state ownership in some western states in order to enhance energy production might have a negative impact on state economies.

For example, the OIA study showed that in 2012, outdoor recreation in Utah accounted for:

Much of that could be lost if Utah politicians are successful in wresting control of federal lands in that state.

The president seems to be working against himself in West Virginia as well. He claims he was trying to help coal miners in that state by attacking clean air rules and killing a regulation to prevent mountaintop removal mining from pollution streams.

But coal mining is dying because of market conditions, not regulations. And it employs far fewer than the outdoors recreation business that will be hurt by the president’s actions.

Coal mining employs about 20,000 in that state, but according to the OIA report, in 2012 the outdoors recreation industry in West Virginia accounted for:

Sportsmen need to know these facts and have them ready to send to their congressional delegation when these issues come up for considering in Washington. This is especially important if you are a registered member of the GOP—the party that is pro-business.

Because, in this case, regulations are pro-business—pro outdoors recreation business, made up of those thousands of companies whose 7.2 million employees depend on those regulations.