In Memory of R. Lee Ermey, “The Gunny” 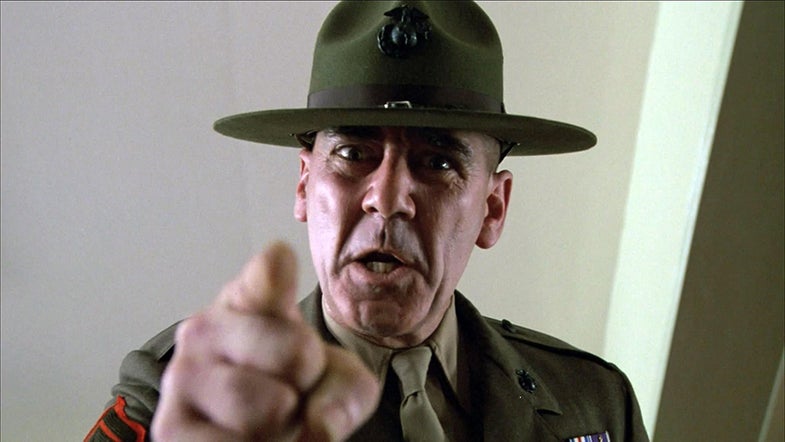 R. Lee Ermey, who died on April 15 at the age of 74, had a long career in films, and played a great many roles, but the one that made him immortal was Senior Drill Instructor* Hartman in Full Metal Jacket. Gunny Hartman seemed to resonate with people. He’s one of the iconic characters of American cinema, and a good part of this comes from the fact that Ermey actually was a D.I. at the U.S. Marine Recruit Training Depot at San Diego from 1965 to 1967.

Glock hired Ermey to man their booth at the SHOT Show and shake hands and sign autographs. Back when there were booth babes, the really spectacular ones would attract a handful of people at a time; Gunny Ermey would have a long line of people waiting to shake the hand that slapped the f***ing cover off Private Pyle’s head.

The Hartman character is described in almost every obituary as “brutal.” This is a civilian conceit. The D.I. is charged with bringing about a radical transformation in the recruits under his command. He (and now she as well) has 13 weeks in which to create people who can do their jobs under the most horrific conditions man has yet been able to concoct.

In his classic book With the Old Breed, former** Marine E.B. Sledge credits his survival on Peleliu and Okinawa, and the retention of his sanity, to the efforts in boot camp of D.I. Corporal T.J. Doherty, a man with predatory green eyes that terrified Sledge, and a furious intolerance for mistakes. We were not only physically tough, Sledge wrote; we were mentally tough as well. We were made that way by our Drill Instructor.

In Strong Men Armed, former Marine Robert Leckie’s history of the Corps’ campaigns in World War II, he describes the aftermath of the Battle of Tarawa, whose Japanese commander declared that a million men could not take the atoll in a hundred years. Major Generals Holland (“Howlin’ Mad”) Smith and Julian Smith are touring the island, attempting to understand why it took so many Marine lives. Let Leckie tell it from here:

Both generals understood at last why pillboxes and blockhouses which had withstood bombs and shells had eventually fallen. Within each of them lay a half dozen or more dead Japanese, their bodies sprawled around those of three or four Marines. Julian Smith’s men had jumped inside to fight it out at muzzle [sic] range.

Many of the pillboxes were made of five sides, each ten feet long, with a pair of entrances shielded against shrapnel by buffer tiers. Each side was made of two layers of coconut logs eight inches in diameter, hooked together with clamps and railroad spikes, with sand poured in between each layer. The roof was built of two similar layers of coconut logs. Over this was a double steel turret, two sheathings of quarter-inch steel rounded off to deflect shells. Over this was three feet of sand.

“By God!” Howlin’ Mad exclaimed. “The Germans never had anything like this in France. No wonder these bastards were sitting back here laughing at us. They never dreamed the Marines could take this island, and they were laughing at what would happen to us when we tried it.” Howlin’ Mad shook his head in disbelief. “How did they do it, Julian?” He began, and then below and above the seawall, he found his answer.

Below it as many as 300 American bodies floated on that abundant tide. Above it, leaning against it in death, was the body of a young Marine. His right arm was still flung across the top of the sea wall. A few inches from his fingers stood a little blue and white flag. It was a beach marker. It told succeeding waves of troops how they should land. The Marine had planted it there with his life, and now it spoke such eloquent reply to that question of a moment ago that both generals turned away from it in tears.

“Julian,” Howlin’ Mad Smith went on in soft amendment—“how can such men be defeated?”

These men are produced by Drill Instructors of the United States Marine Corps.

**There is no such thing as an “ex Marine.” This implies that you were once a Marine, but no longer, and is worth a punch in the mouth. The Corps believes that if you make it through Boot Camp, you’re a Marine for the rest of your life. The correct term is “former Marine.” This means that even if you haven’t been able to fit into your Blue Dress Uniform for 30 years, you’re still a Jarhead at heart.