In Praise of the .300 Winchester Magnum

The 50-plus-year-old .300 Win Mag remains one of the world’s best long-range rounds, capable of uncanny accuracy in the field and elsewhere 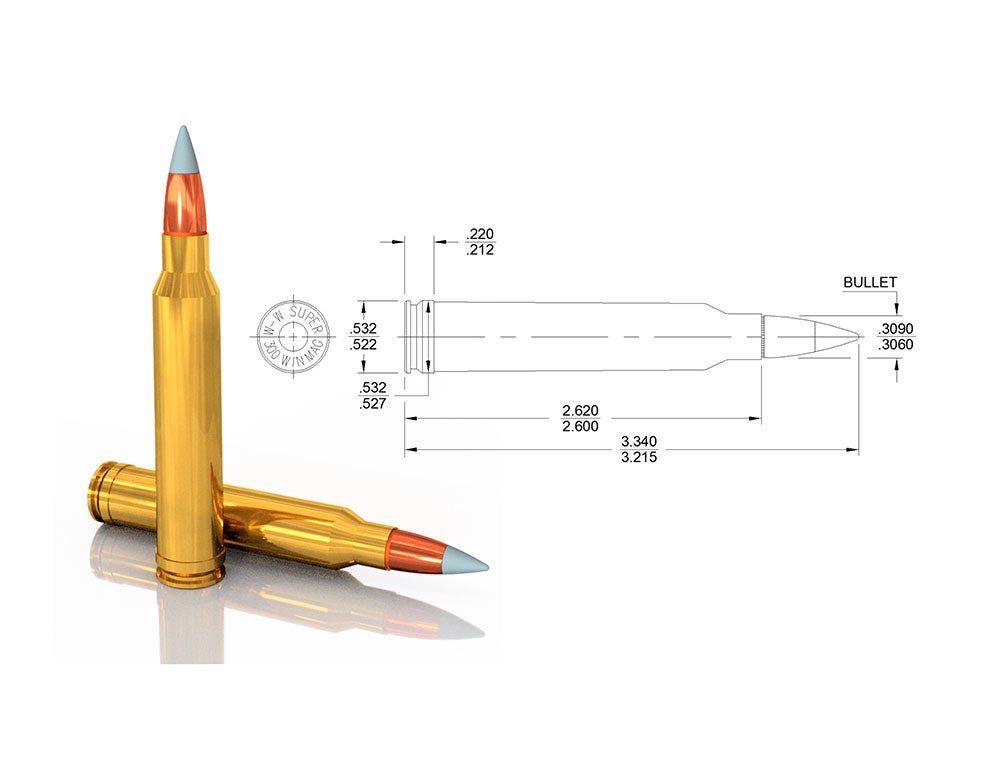 In the past, I have chided the .300 Win Mag for what it isn’t. Compared to the big .30s by Weatherby, Remington, and others, for example, it isn’t much of a magnum. Compared to the .30/06, it isn’t much more capable on game. But there’s another way of looking at it: What the .300 Win Mag isn’t—overly powerful, too hard-kicking, terribly expensive—goes a long way toward explaining what it is: one of the most popular and useful magnums around.

In 1962 Remington introduced its weak-kneed and flaccid* 7mm Remington Magnum. Since only eight people in the United States who did not work for a gun company had chronographs, and since the things were such a pain in the ass to use that only four of those eight actually consulted them, the new cartridge became a raging success.

Winchester, stung by the failure of its .264 Winchester Magnum, felt obliged to do something. And they did. But rather than bring out a competitive 7mm mag, they turned to the .30 magnums.

Despite the success of the .300 Weatherby, Winchester designed a cartridge with considerably less power. Their reasoning was sound. While the Weatherby’s ballistics were spectacular, so was its recoil and the cost of the ammo. It also required a magnum-length action.

So, the new .300 Winchester Magnum was based on a short-necked case that would work through a .30/06-length action and would push a 180-grain bullet at a real-world 2,950 fps, while the Weatherby shot the same slug at 3,150. The smaller case cut down on cost while the lesser powder charge reduced the recoil and muzzle blast.

The .300 Win Mag is a big-game cartridge, not a deer and antelope cartridge, and here you have enough bullet weight to do the job on hefty critters combined with a very flat trajectory.

And there’s more. This .300 Win Mag will really shoot. For all its power, it’s capable of uncanny accuracy.

The first rifle Kenny Jarrett built for me was a .338. When I took delivery he said, “If you ever want a gun that’ll really shoot, I’ll build you a .300 Win Mag.” And so, in 1989, he did, and it shot 180-grain Nosler Protected Point Partition bullets** into .490-inch which, at that time, was unheard-of for a straight-up hunting rifle, and is still pretty damned good.

Roughly 20 years later, I shot another of Kenny’s .300 Win Mag sporters. This one turned in groups of .330-inch, and his rifle tuner, who had worked up the load, was getting much smaller than that, something like .220. Not all .300 Win Mags will shoot like this, but these days, there’s no shortage of rifles that will, if you’re willing to spend the money.

If there was ever the slightest doubt about the effectiveness of the .300 Win Mag, it was dispelled nine years ago when the Army picked the cartridge for its M2010 sniper rifle. And in 2018, the Marine Corps gave the round the nod for its Mk13 M7 sniper rifle, replacing the 7.62 NATO cartridge.

The 7.62 is officially effective to 1,000 yards (though, it will do the job farther out.) The .300 Win Mag officially reaches to 1,300, plus. It’s worth noting that the bullet selected for the .300 is the 220-grain Sierra MatchKing, which begins its journey at a modest 2,850 fps, but keeps most of that velocity Way Out There.

* If you chronograph a 7mm Remington Mag with 160-grain bullets, which are what make the most sense, you get about 2,950 fps. Do the same with a .270 Winchester and 150-grain bullets and you get the same figure. This is Poor Behavior from an allegedly magnum cartridge. The inspiration for the Remington round was Warren Page’s 7mm Mashburn magnum, which spewed 175-grain Noslers at 3,050 fps from a 22-inch barrel and 160s at 3,200. Remington’s great designer, Mike Walker, was a good friend of Page’s and was familiar with the Mashburn, and I’ve always wondered what he was thinking.

** This seems an unlikely choice for a long-range cartridge because the Protected Point Partition has a low BC of .361, which is to sneer at these days. However, Kenny had observed that, for whatever reason, the Protected Point gave exceptional accuracy. I found exactly the same thing. More important, it’s effective. I can’t recall ever sending a second Protected Point after any animal.

Read Next: Nothing Works Better Than a .338