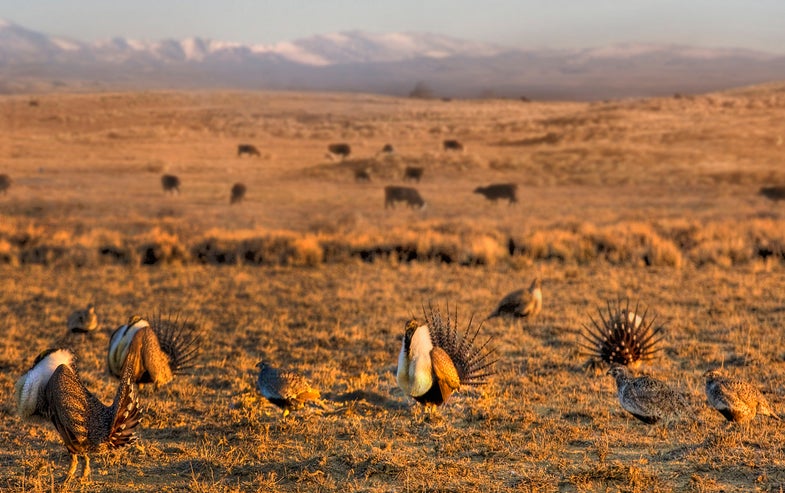 Following a 60-day review of 2015 conservation strategy aimed at protecting the iconic greater sage grouse, Interior Secretary Ryan Zinke announced a series of changes to the plan that will give states more flexibility in managing grouse habitat and will subsequently benefit the oil and gas companies. Reuters reports that Zinke directed his deputy secretary to make nine changes to the existing management program, a move that has drawn criticism from some conservation groups.

Sage grouse populations have plummeted in recent decades—in part because of habitat fragmentation and loss. In 2010, the U.S. Fish and Wildlife Service determined that the birds warranted protection under the Endangered Species Act. In 2015, however, before the protection went into effect, the Department of the Interior and the Department of Agriculture released the Greater Sage Grouse Conservation Plan, which included input from federal agencies, state governments, ranchers, business leaders, and conservation groups. The management plan determined, among other things, that the greater sage grouse should remain off the endangered-species list, a decision that was widely applauded by sportsmen, and it also established a path to further the bird’s recovery. The FWS called the plan the “largest land conservation effort in U.S. history.”

Upon the plan’s release, however, Republican governors in Western states—including Idaho, Nevada, and Utah—as well as gas and oil interests, argued that it would impede on local economic development, NPR reports.

In a memo this week, Secretary Zinke directed Deputy Interior Secretary David Bernhardt to implement the recommendations from the review, including to allow states to set sage grouse population objectives with less input from the federal government; to clarify waiver standards; to provide additional flexibility in management decisions; and to re-evaluate habitat protections, according to The Hill.

The task force that reviewed the Sage Grouse Conservation Plan included staff from the Bureau of Land Management, U.S. Fish and Wildlife Service, U.S. Geological Survey, and governors of the 11 affected states. “A cooperative (Department of Interior) and State effort can provide the flexibility for responsible economic growth and at the same time ensure conservation of (greater sage grouse) habitat,” the task force wrote in its report.

Energy organizations, such as the American Petroleum Institute, cheered Secretary Zinke’s decision to alter sage grouse conservation efforts. “The record shows that energy development and sage grouse populations can successfully coexist, and the industry has been a leader in working with state governments and agencies to preserve Western habitats, while continuing to meet the needs of America’s energy consumers,” the group’s upstream director, Erik Milito, said in a statement.

Conservation groups took a dimmer view of the action, however. The Wilderness Society’s Nada Culver issued a statement saying that Zinke’s recommendations could undermine the goals previously set to protect grouse, and called the recommendations “a sideways attempt to abandon habitat protection for unfettered oil and gas development, in favor of discredited, narrow tools like captive breeding and population targets.”

A recent poll conducted by Harper Polling, on behalf of Backcountry Hunters and Anglers, found that 56 percent of sportsmen support the grouse conservation plans that Secretary Zinke announced that the DOI will now scale back. In response, BHA conservation director John Gale said in a statement that healthy sagebrush habitat is essential for game populations, hunting and fishing opportunities, and local economies. “Our poll confirms strong and bipartisan support for conservation plans currently in place, especially among hunters and sportsmen,” he said. He continued by adding that Secretary Zinke should maintain the integrity of the conservation plans in place so that “so we can continue to enjoy healthy and huntable populations of sage grouse and count on the future of our outdoors way of life.”

Similarly, in a blog post, Ed Arnett of the Theodore Roosevelt Conservation Partnership said that changes to the greater sage grouse conservation plan could “drastically alter the course for habitat conservation and undo years of hard work—years that sage grouse don’t have to waste.” Likewise, in a Facebook post, TRCP stated that Secretary’s Zinke’s language regarding great sage grouse has sparked concerns that the DOI will “will put development first and grouse second.”