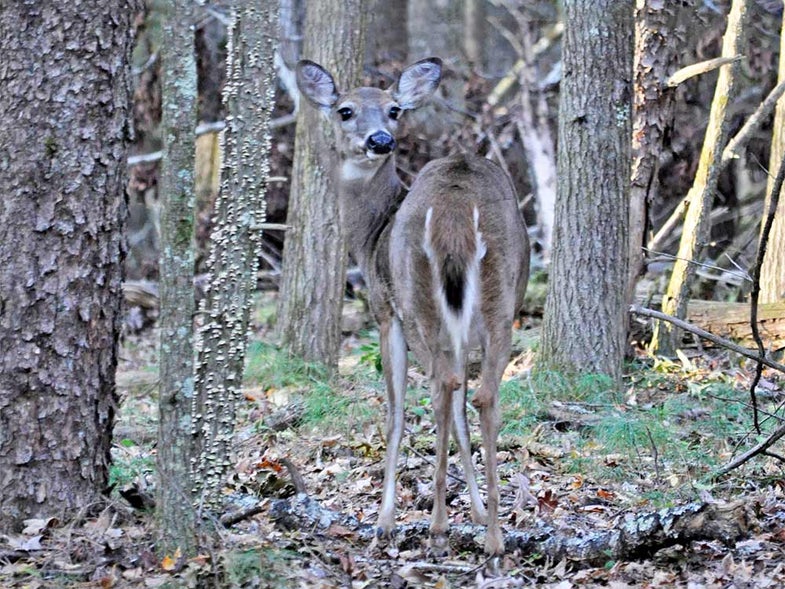 How to blend in. Photo by Heather Paul via Flicker
SHARE

I went hunting, after a fashion, the weekend before last. I’d been planning to head to southern Virginia for the muzzleloader opener, but those plans got derailed. When some new friends in Maryland invited me to hunt, I figured things were back on track. I showed up at 5:30 Saturday morning with my muzzleloader, only to find that Maryland muzzleloader didn’t open until the following Saturday. Oh. I knew these friends would figure out I’m not the most organized or sensible person. I just hadn’t counted on it happening so soon.

My host loaned me his compound, which more or less fit. Good, I thought, you’re back in it. Still, shooting someone else’s bow without making sure it hits where you’re aiming is a dicey deal. And, now that I look back on it, a questionable one, too. Fortunately, I never had to worry about shooting it. I did have raccoon pass directly below me. It went another 20 yards, stood on its hind legs to sniff the wind, and returned the way it had come. I’d love to know what it smelled on that wind. Later, I made out two does and a fawn 95 yards away, partially obscured by brush. At one point, the does stood up and threatened each other with their front hooves but somehow worked it out. That was cool to see, although I have no idea what they were arguing over. Then, 10 minutes later, I turned my head away and when I looked back, a deer was bedded just 45 yards away, looking calmly in my general direction. I never cease to be amazed at how they appear and disappear without locomotion, like an animate mist. It stayed for half an hour, occasionally putting its head on the ground as if drowsy. Then, responding to some impulse known only to itself, it slowly stood and ambled away in the wrong direction.

I came down at 11 and by noon was driving the 90-minute round trip home to get my crossbow. By 3 p.m., I was back in another stand, this one fairly deep in the woods. It was a glorious day, football weather, with amber sunlight flaming up the fall leaves. Squirrels chased each other around with squirrelly abandon. Three turkeys bobbled by as if on a line toward someplace else.

Everything was perfect except for nonstop winds of 15 to 18 mph. There weren’t any deer moving. Or if there were, I wasn’t seeing them. But on days like this, I often feel like a bunch of them are just over the next rise, courting and fighting and offering themselves broadside at 28 feet.

This kind of thinking leads to madness, of course, so I explored just how uncomfortable I felt sitting there with a crossbow. I can’t prove that the crossbow was designed with hunter discomfort in mind, but I have my suspicions. I haven’t measured mine, but I’d guess that it’s about 7 feet long and weighs 60 pounds. Every surface on it is sharply angled and made of the loudest space-age composite ever created. I quickly discovered that my sitting field of fire measured about 90 degrees and included hard stops at two branches that wouldn’t have impeded a weapon 6 inches shorter, such as, well, a compound bow. The stand had no shooting rail, which I need with one. I had a shooting stick, but its pointed tip kept slipping between the bars of the platform, and then I accidentally dropped it. It made a very deerlike metallic ring as it hit the ladder steps twice. Perfect, I thought, they’ll definitely come running toward me now.

At least you’re hunting, I told myself. Stop complaining. And it was a glorious fall day in November. Anything, I reminded myself, can happen in November. There are plenty of days to come before the rut is over. Stick it out. You can’t win it if you ain’t in it. Find a way to be in it. Me, I’m going hunting again tomorrow.