It’s November and the Deer Are Moving

The rut is a magic time for…hitting a deer with your vehicle, according to the Highway Loss Data Institute and... 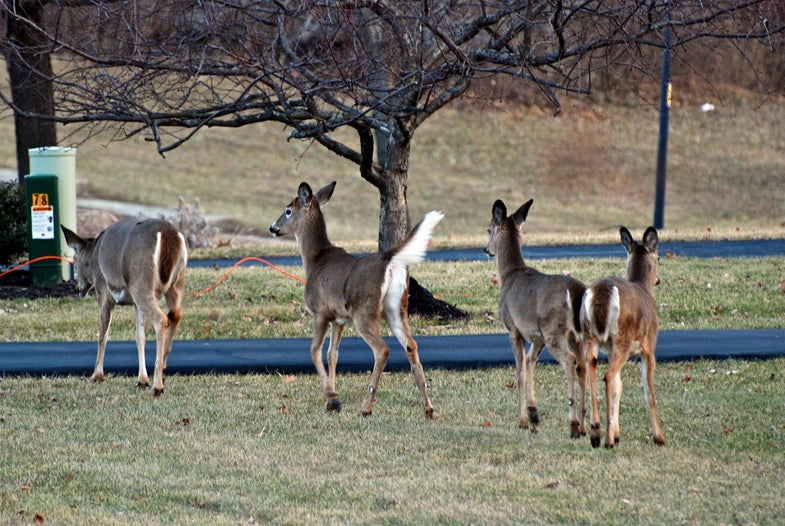 Deer prepare to cross a road in a suburban neighborhood in Indiana. Courtesy of Wplynn/Flickr
SHARE

The rut is a magic time for…hitting a deer with your vehicle, according to the Highway Loss Data Institute and State Farm Insurance. It’s three-and-a-half times more likely than in, say, August. In 2011, there were 1.23 million deer-vehicle collisions, and about 200 deaths. The average cost of an accident is around $4,000, which would pay for a pretty nice hunt.

If we can put a man on the moon, why can’t we come up with…oh, never mind. Apparently, we’re just not real smart about deer. Or the auto-repair lobby is way more powerful than I thought.

Here’s a useful factoid. Hitting a deer is not covered by the collision portion of your insurance. It’s covered under the optional comprehensive portion, which includes fire, theft, riot, flood, earthquake, explosion, and other things I rarely consider. I don’t know about you, but I’m going to review my policy as soon as I finish this blog. I don’t have a spare four grand.

State Farm has put out its “Top 2016 Deer-Crash Risk Rankings” data, which is breathlessly awaited by states hoping for some recognition. (Yes, I’m talking to you, Rhode Island.) Did your state make the list? Find out below. (Incidentally, I loathe rankings that force you to go backwards, from 10 to 1, to see the best rifle, hottest supermodel, or best epic-fail video. So I’m going to lead with the good stuff.

8-9. A tie between Michigan and Wyoming. Odds in both: 1 in 85. Michigan ranked #10 last year, while Wyoming was #12. Michigan’s odds of hitting a cervid have risen 14.1 percent in the last year, while Wyoming’s have surged 17.1 percent. (And yes, that does include mule deer, which now outnumber whitetails. The state also has the country’s largest antelope population. No idea how many of those get hit. Seems like it would be a low-odds kind of thing, but I could be wrong.)