Get ready: Deer are starting to drop their headgear 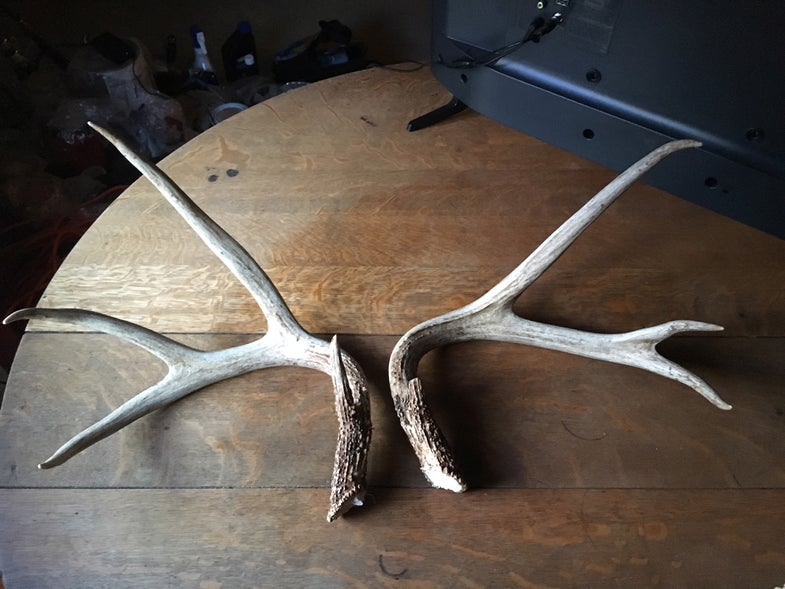 Smith's first find of the season. By the author
SHARE

There’s calendar time and then there’s deer time. Paula Smith doesn’t put much stock in calendars, but she calls me the day she finds her first shed, her voice animated by purpose. It was New Year’s Day. “Found my first antler today,” she said. “I know this guy. Inherited a trait from his father. Thought you’d wanna know.” By the time I stopped by on January 3, she’d found its mate.

“The first one was in an area he doesn’t use much—really thick but no food. Only reason he’d go in there at all is to get from point A to point B. Fresh, too. Still pink at the base from blood. So I decided to go back to where I’d expected to find the first one and look more carefully, really slow, you know? Lo and behold, there was the other. Been doing this 20 years, and I still miss a big shed on open ground. Just goes to show.”

The buck is a young 8—Paula says he’s 3 or 4 years old—with good potential. “See how the last two tines on one side have good spread and not much on the other?” she said. “If he lives, those little ones should open up this year.” Still, he’ll never be a monster, the kind that gets her up and on the 5:24 a.m. bus almost every day for the first three months of the year.

“Yeah, it’s those big sets that keeps me going,” she says. “Best year I ever had was three sets of those. It’s OCD, I know. But I enjoy it, so why not?” She keeps notes on about 20 deer at a time. Where they hang out, the last date she saw them with antlers, the first date without, and when she has found their sheds in past years. If she finds them. “I can’t be everywhere at once,” she says. “I wish I could.” When a buck dies and there are no more records to keep, her notes are still useful. Bucks are like bass. When one vacates a good spot, another is usually happy to take it.

Circumstances beyond her control can dash her hopes of finding antlers of a buck she may have been monitoring for years. “This one buck spends way too much time on the campus of a Homeland Security complex off Nebraska Avenue,” she says. “I don’t mess with the Feds anymore, honey. Another goes into this chichi %*$#-ing gated community with a guard house I can’t get past. I tried, even dressed up nice. Nice for me, anyway. Still didn’t work.” Still another is off-limits because the bus no longer goes anywhere close.

“You wanna see my trophies?” she asks. She leads me upstairs to an empty room and starts pulling out boxes. There’s a big box of “medium” antlers thrown together. The big sets are individually bubble-wrapped. She pulls out about eight sets, tells me that’s enough for now, and lays them on the floor. Her favorites at the moment are an almost Gothic pair from a 12-pointer, the tines twisted like trees in a Van Gogh painting, pearling so heavy at the bases you almost want gloves to protect your hands.

Paula sees me lost in looking at them. “See? You’re as bad as me.” It’s true. The idea that a creature this wild—that can grow something this menacing, powerful, and mysterious out of its head—lives inside the D.C. Beltway makes me strangely hopeful about life.