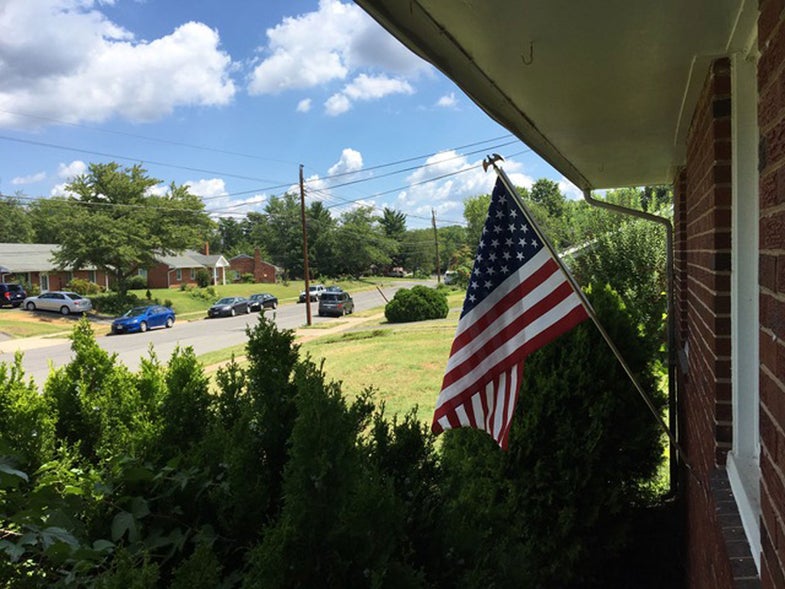 If you haven’t got a flag out yet, go remedy that right now.

I’m in a new rental at the moment and haven’t found mine, so I stopped by Home Depot last night and bought a horrible $10 one. It says “Made in U.S.A.” but has a plastic gold eagle, plastic screws, and a plastic bracket that took me two hours to mount to the brick front of the house. But the flag is flying. Dad has been dead for 10 years, but he hasn’t left yet. He’d let me know if I screwed up.

Dad had retired from the Navy before I was born, but he never really left it. For the first 10 years of my life, for example, I thought it was just a coincidence that the Pledge of Allegiance and the Lord’s Prayer both ended with the words “Beat Army.” As a boy, all I knew was that Dad had the annoying habit of showing up 15 minutes early for everything. I didn’t know that it was how he’d been trained, and that it was good training, too, because being even 15 seconds late in combat can mean the difference between life and death.

After his Naval Academy class graduated in 1941, soon after Pearl Harbor, Dad went straight to convoy duty on board a destroyer as a gunnery officer in the North Atlantic, where German U-boats were sinking merchant ships almost at will. The destroyers lobbed depth charges and fired on the subs on the surface when possible. Their orders were to bypass survivors clinging to wreckage and stay with the ships still afloat. It was only when I was an adult that my mother told me how Dad would awaken from nightmares, sweat-soaked and shouting for someone to replace the man in the forward turret, who had inexplicably stopped firing his gun.

Dad had dementia for years before he passed, so there were a lot of things I never got to ask him. I know that he became a naval aviator after the war. He flew Corsairs. He landed jets on carriers at night. An old friend of his thinks he might have flown missions in Korea. He says Dad never told anything but humorous war stories, and that this was typical of someone who also had other stories but felt no desire to share them. And then he said something I’ve never forgotten. “But I’ll tell you this. Your Dad was a warrior. And what I mean by that is that he understood that the mission was more important than he was, that there was probably a lot more at stake than his personal safety. And that he accepted that and was prepared for it.”

The reason this country was able to be created and sustained for more than 200 years is because there have been enough men—and now women—who are capable of that kind of sacrifice, who think there is something larger and more noble than mere self-preservation. The Fourth of July is one of the times we can recognize them for that.