Keep It Simple, Keep It the Same

Three steps to better shotgunning, and why you should stick with your own gear 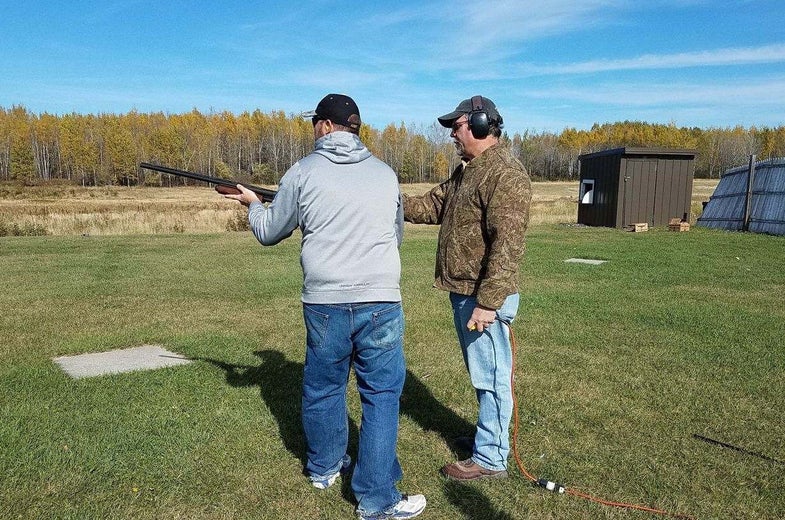 Andy Duffy (right) works with Forrest Pryde on some shotgunning basics. By the author
SHARE

KISS (“Keep It Simple, Stupid”) has a corollary: “Keep It the Same….” It’s good advice, and a tonic for those of us who like to fool around with different guns.

I watched Andy Duffy, who has shot at a very high level for a long time, teach both KISSes at the Ruffed Grouse Society’s National Grouse and Woodcock Hunt last week in Grand Rapids, Minnesota.

There were two Wounded Warriors in attendance, and I stood in the background while Duffy worked with both of them. The student in the photo is Forrest Pryde, the sole survivor of a helicopter training accident. Getting a rifle shooter ready for a day in the grouse woods in a single lesson is no small feat, but Duffy did it in three steps.

First thing he did was fit Pryde’s gun to him. He found a slip-on pad and some electrician’s tape and got the length right.

Second came the move to the target. Most basic lessons begin with going away targets. Rather than start with straightaways that would only encourage the aiming habit that he was trying to break in a student who has spent many hours on the rifle range, Duffy began with crossing targets from a gun-down start. He worked on Pryde’s gun mount and move on crossing birds, not worrying at all about hitting targets, just about getting the move right (muzzle to target first, match the speed).

One the gun mount and swing was right, all that was left was teaching lead. “If you shoot right at it, like you’ve been trained by the Army, you’ll miss behind,” he said. “Go past the target until your brain says, “That’s too far,” and shoot.” Before long, Pryde was turning targets to dustballs.

The hits were so violent, Duffy asked what choke Pryde had in his gun.

“Take the choke out and shoot over the threads,” said Duffy. “That will give you a wide-open pattern at close range.”

“I’m going to borrow a gun,” said Pryde. The RGS hunt is a high-rolling affair. I’m sure someone would have put a really nice double in his hands in place of the 12-gauge 870 Express he’d brought with him. Duffy’s reply was the best part of the lesson:

I checked with Pryde and his partner later. They did very well on grouse and woodcock.

Keep it simple, keep it the same. Shotgun shooting is only complicated when you do it wrong.