No matter if it's a gourmet feast or a rustic camp supper, a family meal of shared wild game has always brought hunters together 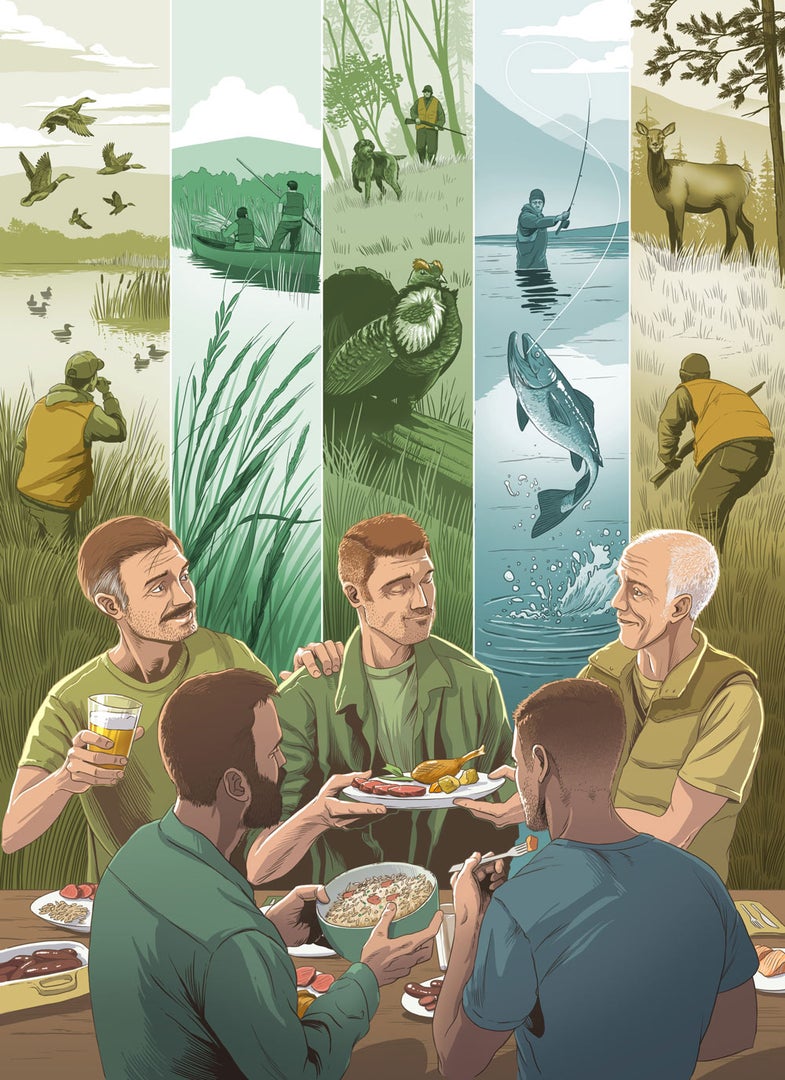 The dusky grouse came from the big slopes of the Flathead and Kootenai national forests, behind Tom Healy’s house in the Northern Rockies. When Fast Eddie, Healy’s wirehaired pointing griffon, locked up along an edge of pines, Healy knew instantly and intuitively that it was no ruffed grouse. “The big duskies like that sunshine, that open ground in the big woods,” he says, standing in the deep shade of a wall tent, stirring a mixture of grouse meat, elk meat, and wild rice. “I knew what was coming.”

Healy harvested this wild rice too, with his wife, in a canoe deep in Minnesota’s Boundary Waters. Now he stirs the dirty rice in a black iron pot as he describes arrowing through the dense rice stalks in the canoe, knocking the grains loose with short wooden batons so they fell into the boat.

There is elk heart in Healy’s dirty rice mix too, and elk sausage from a cow he killed eight days into a Big Hole Valley backcountry hunt. He had a .270 in camp, he recalls, but he carried a slug gun that day. “I wanted to force myself to get a little closer,” he says. “Make it a little more real.”

I glance around the tent. Nearby, a tall, bearded, cowboy-hatted guy sears mallard breasts from a Rocky Mountain spring creek. Another outdoorsman debones a Bristol Bay salmon. There is snowshoe hare and Idaho chokecherry sauce and goose confit in the works. On an open fire outside the tent, skewers of lynx meat sizzle. Getting closer to the heart of the matter seems to be the dish of the day. I’m in Boise, Idaho, at what is arguably the world’s most impressive wild-game meal: the Backcountry Hunters & Anglers field-to-table dinner, held during the group’s annual Rendezvous. Each year, some of the country’s best wild-game cooks put on a fundraiser feast so fine, it’s been written up in gourmet-cooking magazines.

Read Next: Welcome to the Country’s Greatest Wild Game Cookoff

I wander from camp stove to fire pit, sampling beaver meatballs and smoked Lahontan cutthroat trout. I quiz the chefs about each dish, but what I hear most isn’t the merits of wild plums versus the grocery-store variety, or why jackrabbit is underrated on the table. Instead, everyone tells me a story about the harvest. I hear how warm it was that January day on the Boise River when the trout were biting, how the moon lit the trail on the tough hike out with the elk quarters.

It’s been this way, always. This might be one of the fancier wild-game gigs I’ve ever attended, but I’ve felt this same kinship in Cajun squirrel camps, Yukon duck camps, and my deer camp back home. It’s what we do. The earliest art, religion, and connections between human communities were all rooted in the things we chase, kill, and eat. And share.

Here’s another story: A few years ago, my wife, Julie, and I had new friends over for dinner. I smoked a chunk of pronghorn backstrap and served it with Gouda cheese and red peppers blackened on the grill. It was not terribly different from our normal wild fare. To our guests, though, antelope was the most exotic meat they’d ever eaten. They gushed about its tenderness and sage-tinted bite. They wanted to know where I’d killed it (Wyoming) and how (arrowed from behind a decoy). They asked about my other hunts. They were surprised to learn that I butchered my own deer and aged ducks in the refrigerator’s vegetable crisper. They were unaware of the modern hunter’s connection to this ancient cycle, that wild meat still nourishes soul as much as body.

I asked if they’d like to meet their meal, since the antelope’s head was hanging on my office wall. They politely declined, but still, that one simple meal sparked a conversation about hunting, sustainability, and the honesty of eating what you kill. They still talk about it. Not every wild-game dinner is a conversion experience, to be sure. Sometimes you just want to chew on a squirrel leg. But there’s no doubt that a grilled backstrap is as fine an argument for hunting and fishing as any philosophical treatise.

At the BHA chow-down, I hover over Idaho chef Randy King as he works up a dish of spring rolls stuffed with goose confit. Always a sucker for a good goose dish, I’m about to ask for the particulars of the dish, but King tells a different story. “This is kind of funny,” he says, “in sort of a bad-funny way.” He tells me that he and his 12-year-old son, Cameron, hunted these geese from a southwestern Idaho farm ditch last winter. Cameron was shooting a single-barrel 20-gauge, the kind with an exposed hammer, and with the first shot, the hammer bit the boy on the cheek hard enough to require stitches. Blood gushed. “I felt awful,” King says, “but he is so proud of that scar, you wouldn’t believe it.”

But I would, of course. What hunter wouldn’t? It’s the kind of story that seasons a meal and life long after the hunt, and makes every day on this Earth a sweeter bite of life.

Gear Tip: Cooking by the Book

Time to make some room on your bookshelf. Randy King’s collection of recipes and essays, Chef in the Wild: Reflections and Recipes from a True Wilderness Chef is pretty close to sharing a cooking fire with the Idaho icon. And the latest cookbook from award-winning food author Hank Shaw, Pheasant, Quail, Cottontail: Upland Game from Field to Table, elevates gamebird and small-game cookery to its rightful status.