Knife Work We Live For

The sound of an edge running across a stone, punching a hunting tag, field-dressing a deer—these moments capture why outdoorsmen love knives 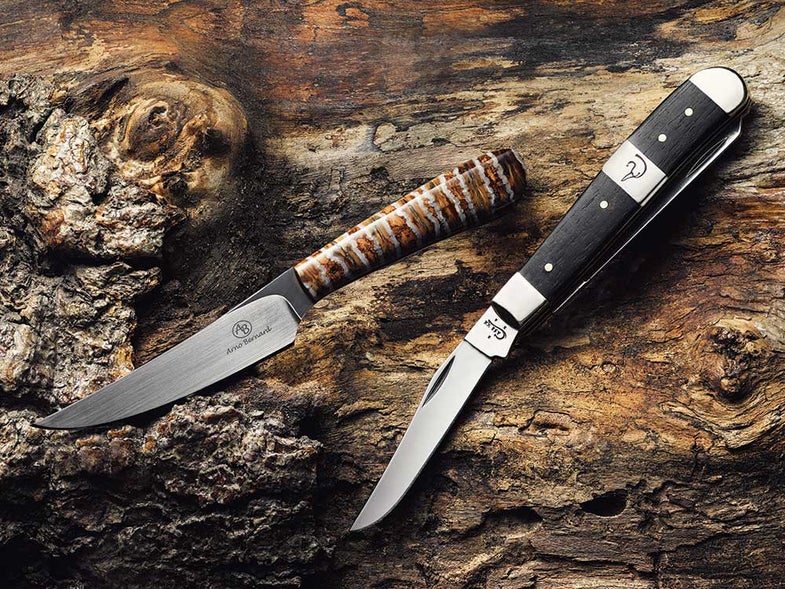 Timeless Tool: The Case Mini Trapper—with two blades, clip and spey—is as useful as it is classy.. Travis Rathbone
SHARE

Similar to the feeling of making a quick, clean shot with the rifle that you painstakingly sighted in and spent hours practicing with at the range, there are some examples of knife work that are immensely satisfying and rewarding. Punching a hunting tag, breasting a duck, or making the final field-dressing cut on a deer—we live for jobs like this, the kind of jobs for which only a sharp knife will do.

A knife isn’t necessary. You could do this task with nail clippers or a stick. But punching a tag is a turning point in the hunting and killing of game, so it’s worth a bit of gravitas in hand. With the knife point, you clip away month and date from the tag, the tiny pyramids of confetti spiraling to the ground. It’s an apt metaphor: This is a celebration of hard work, preparation, practice, and luck. And with the tag punched, there you are. According to law, this animal is now yours. It’s only fitting that you do this with a knife. Because you’re not yet finished with the blade.

It is easy to do a decent job of breasting a duck—and just as easy to hack the thing to pieces. So you take your time. Use a sharp knife, one with flex to the blade. Hold it flush against the keel of the breastbone, to free the pectoralis minor muscle, the “tender,” in one piece. Angle the tip under the wishbone to capture the full length of the breast. Leave no flesh behind. Done well, the breastbone and wishbone are a gleamy, creamy white, smudged with no more than a smear of blood and meat. And in your hand is a complete fillet, a gift from the marsh gods, and a testament to your skill with both gun and knife.

It comes as an untidy skitter, a flat spot along the knife edge. It is time. No shame in that. There is a certain honesty in owning up to a dull edge. If you have done your part, there is no indignity in an edge blunted on hide, hard wood, or the rope that binds the whitetail to the truck bed. So, find a quiet place with few distractions, a flat surface, and a good stone, and commence a sort of honorable labor that reaches back ages. There is no mystery to sharpening a knife. But there is mastery—and you seek it as the raspy screech of steel on stone shimmers down your spine.

On your knees, your face buried in the animal’s chest. The scent of mud and blood and hide fills your nose, your arms elbow-deep inside the deer. This is the most intimate of cuts, the final freeing of unseen innards, the next step in this journey of turning death into life. One hand holds the knife as the other reaches until it can reach no farther, feeling each hard ring of trachea. As the blade severs the windpipe, the carcass shudders—as if letting go of something it has held close and dear. You back your hands out of the animal’s chest and in one fist, the glint of steel and the sheen of blood tell the story of all that has led to this moment.