Total Outdoorsman: The Last Minutes Can Make or Break a Deer Hunt

When you find the patience and will to stick it out in your stand until the last second of legal light, anything can happen 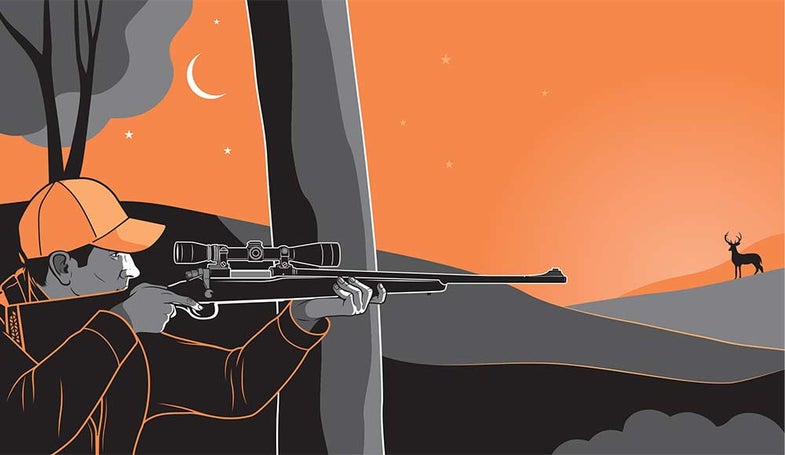 Just like always, I had set my cellphone alarm before I climbed the tree ladder so it would vibrate at the exact end of legal shooting hours. The alarm keeps me honest. And focused. Like now.

I knew the moment had to be close. Any second my phone would start buzzing like a cricket in my pocket. I stared through the scope, the crosshairs pulsing with each heartbeat, as I silently watched the biggest deer I’d ever seen in the woods feed on brambles just inside the edge of a swamp. The buck wasn’t 75 yards away. I could see the long curve of its main beam, a creamy slash in the twilight. Tine tips tottered high overhead. But a glimpse of neck, a flick of ear, a tease of antler—that’s all I could see.

Step out, I silently begged. Please. I kept the crosshairs pinned to where I imagined the buck’s shoulder would be, and I held the shot. The seconds ticked away. Just one step. Please. I watched for 15, maybe 20 seconds. Please.

I knew the moment was coming, but I still jerked when the phone buzzed. Time’s up. A shot now would be illegal, unethical, and dangerous. But I kept my eye in the scope, because as sure as I knew the alarm was impending, I knew what would happen next: Ten seconds later, the entire animal emerged into an open glade. I watched the buck prance in pale light for five full minutes under the stars.

Unless I tag out early, I hunt until the bitter end, every hunt, every time, until the legal-light alarm chirps in my pocket and the letter of the law bids me to unchamber the firearm. It’s all about the math. The later it gets, I figure, the better the chances. Each second holds immensely more promise than the second before. We all feel the pressure as the shadows lengthen and then disappear altogether, and the evening cool falls like dew. But it’s the near-infinite hope held in those last few grains in the hourglass that drives us crazy. And keeps us in the woods. There is both magic and misery in the last few minutes of legal shooting light.

On cloudy evenings or on new-moon hunts, it seems crazy, that much I admit. In the last few minutes of legal light, there are times I can barely make out the trunk of a neighboring tree. I’ve passed my hand in front of my eyes, just to compare the relative darkness. But then I look through the scope at 30 yards distance, and the deer trail emerges from the dark like a silvery lane of moonlight on water, and I imagine a whopper standing there, calm and quiet and still. Could I make the shot? That’s the important question to ask. Not whether or not it is likely to happen. Not whether or not I want to drag an animal out this late in the black dark. I’ve worked hard to sneak out of the office, drive to the woods, and walk the long way around to move into the wind. I’ve climbed and suffered and let itches go unscratched. It seems nuts to fold the tent with three minutes of legal light left. As long as there is any chance at all, I’m going to remain in my stand until the clock says I can hunt no longer.

One hunt long ago locked me into this pattern. It was a cold sit, colder than normal for the rut in my neck of the woods, and I shivered during a late last hour of nothing. Deer should have been running through the woods like Pac-Man, but all life seemed to have been sucked out of the forest. It seemed pointless to stick it out, and in the dark, the doubts grew. The voices started grumbling in my head: You could be halfway back to the truck by now. The kids are bent over homework, and you’re wasting time in the dark. A deer would have to be broadside at 15 yards for you to shoot, and what are the chances of that?

The voices won, so I slipped my release into a pocket and unnocked the arrow. That’s when the whitetail buck stamped, unnerved by the movement. He stamped twice more and then bolted—his snort an indictment of my weakness. In the near dark I couldn’t tell his size, but I could tell this: Had he not seen my movements, his trajectory would have carried him broadside to my tree­stand. At 15 yards.

Two days after my crepuscular near-miss along the swamp edge, the season ended. A few days later, I back-trailed that deer from the spot where he’d won our twilight showdown, and figured out where he had come from and where he was going and where I would ambush him the next season with time and daylight to spare. I had literally dreamed of that buck in the shadows, and I vowed to hunt him the next year till he fell or I’d lost the house to the bank. Instead, my club lost its lease on that farm. I’ve never had a second chance, and all I’ll ever have of that vampire buck—still the largest I’ve ever seen from a stand—is that single, late-light encounter.

I think about that deer more than any other whitetail I’ve ever seen in the woods. The memory of that buck keeps me in the stand long after the sunlight has melted away and I can barely see the ground, and stars wink between the dendritic fingers of the overhead canopy. When I don’t think there’s a prayer of seeing a deer, that whitetail quiets the voices in my head and helps me tough it out: Sixty seconds longer… Just 30 seconds more… Not yet, stay down… It can happen any second… Have faith… Ten seconds longer, and you can call it quits…