The Biggest Lesson of Getting Skunked 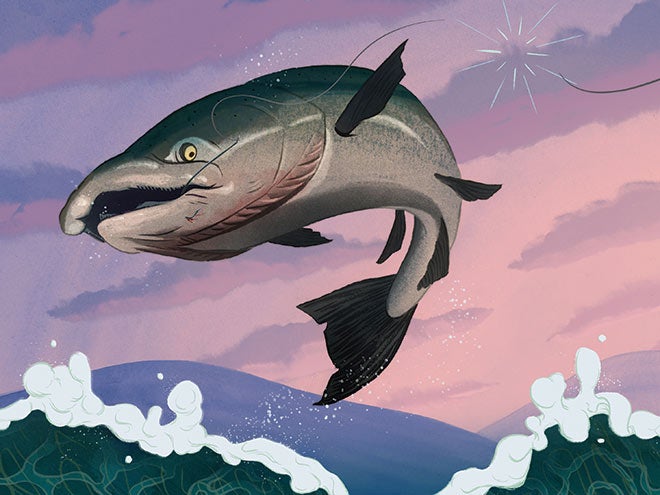 I still believed, even after our guide called it a day. Whitecaps were stitching the broad plain of the Columbia River, from shore to shore deep in the gorge, all the way to the mouth of the Deschutes. I knew the run back to the boat ramp would be a back crusher. I knew we hadn’t had a strike in four hours, despite five anglers in the boat and legendary guide Herb Good at the helm. And I knew all too well that our crew had caught just three fish in four full days of fishing. Still, I believed my fish was coming, despite Good’s concession.

Through 30 hours of relentless fishing, through the slop and chop, the long faces at the fish camp, the guides’ grimaces, and all of the worn-out “that’s why they call it fishing” maxims, I never stopped believing. I knew the bite could turn around in a single cast—that at least a few of the million-plus Columbia River chinook salmon would take an interest in my glob of eggs.

So I jerked as if startled by a gunshot when Good conceded the day. I’d focused every synapse toward my rod’s top guide as I watched—minute by minute, hour by hour—for that subtle tick that would signal a bite. It could happen. It would happen. I still believed.

This one was supposed to be a gimme—a fishing trip to the promised land of easy limits—and I had been dreaming of it for months. The Columbia River’s salmon run is a million strong, and the stories I’d heard of fishing in the gorge were extraordinary: four rods going off at once and every fisherman onboard filling his three-salmon limit in just an hour. As if my expectations weren’t already high, I’d even landed a day on the water with Good, a well-known guide whose approach to fishing with salmon eggs is legendary in the Pacific Northwest. Bottom line: This trip was a slam dunk. At home, I cleaned out the freezer and packed my gear in coolers, not duffel bags. If I needed more space, I could ship my clothes home.

The first 15 minutes of the trip lived up to every expectation. I had steeled myself for hover fishing’s requirement of monklike concentration: Fishing in 25 to 50 feet of water, you lower an egg rig slowly until you feel the bottom, then crank the reel handle twice to lift the bait off the bottom. From there, it’s just a matter of holding the rod absolutely still, cradled in your hands with the rod tip 6 inches from the water, and watching for the subtle signal of a salmon mooching an egg several fathoms away. On our second drift, my rod doubled over. Forget the nuanced take of a hover-hooked salmon—the rod tip plunged under the boat. When I set the hook, the fish felt solid, like a living thing carved from the basalt cliffs that crowded the Columbia River.

Every­one on the boat broke into cheers the first time the fish jumped. It would go 25 pounds, or better. A salmon that big could make the trip—but one like this right out of the gate? We could hardly imagine the days that would follow.

When the chinook jumped a second time, it cleared the river by 2½ feet, turned on its side, and shook like a wet dog. The line snapped, sending the sinker hurtling toward the boat. It hit the water with a sad little sound I can hear to this day: Plooop.

Other than a single hammer-­handle jack chinook, that was it for me. Honestly. For the next four days, my buddies and I drowned quarts of salmon eggs. Hours passed without a hit. By the end of each day, we stumbled to our tents, brains foggy, eyes bleary, completely befuddled. Each morning, we would hit it just as hard as the day before. At the end of our dream trip, we had tallied three fish in the boat.

What more do you do? Our guides tried it all: hover fishing; slow trolling; chunking spoons, plugs, and enough cured-egg rigs to open a breakfast diner.

The toughest part of it all was that we could never really kick back and relax. Hover fishing, especially, demands such focus that if you let your attention flag for a second, you may miss a strike.

We’ve all had days on the water with the hot bait, the can’t-miss cast, the only fly pattern that works. Those are the days when fishing is all fun and games. Other times, fishing is pure faith. When the fishfinder flatlines, each cast seems futile, and the strike indicators suggest it’s just not going to happen, what do you do? You fish harder.

RELATED: The Best Plan B When Fishing Goes South

Toward the end of our last day, breaking waves smacked the transom, giving credence to Good’s command to call it quits. He made the right call, and I wasn’t going to fight him, but I wasn’t going to go gently.

I slowly cranked on the reel handle, creeping the eggs up through the river, hoping Good wouldn’t notice. There were 26 feet of salmon water left to fish, and despite what the experts say, not all of the fish could be hugging the bottom. I had one eye on the rod tip and the other on Good. He glanced my way, watched me for a second or two, and grinned.

Fifteen feet to go. It could still happen. I chose to believe.

TIP OF THE MONTH: Cut Them Some Slack

Tarpon fishermen are drilled about “bowing to the fish” when a silver king jumps, and freshwater anglers fighting big largemouth bass, trout, or memory-­making salmon (as in my case) should follow suit. To lessen the strain a jumping fish puts on leaders, lines, and tippets, lower your rod tip quickly by bowing to the fish. That puts a bit of slack in the line, which could help keep the trophy fish good and hooked. —T.E.N.