Lessons From Chasing Caribou With the Last Subsistence Hunters

I have been to some remote parts of the world, places where I had nothing but sign language and an... 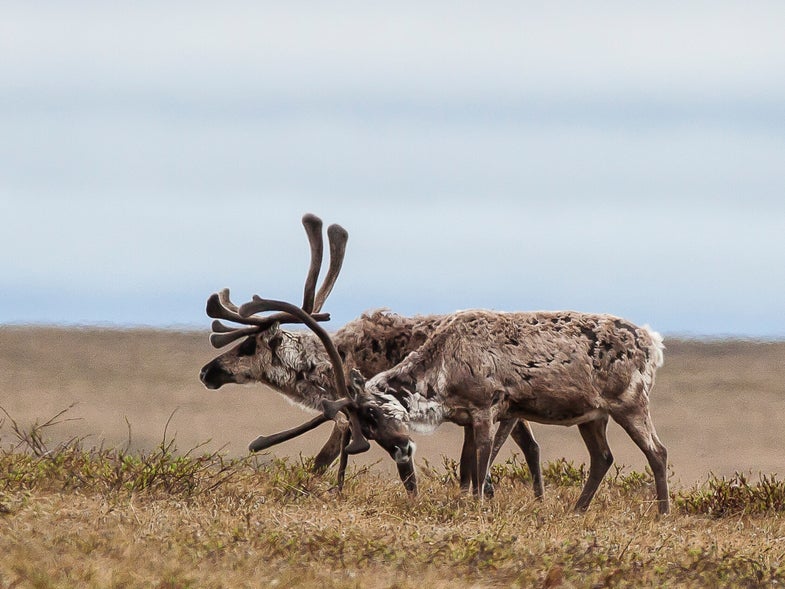 I have been to some remote parts of the world, places where I had nothing but sign language and an uncertain understanding of what I’d gotten myself into. None of those places could compete with Arctic Village, Ala.—right here in the U.S.A.—where, six years ago, I spent 11 days chasing caribou with the Gwich’in Indians. Field & Stream recently posted the story I wrote about the trip to its website for the first time, which brought all this back to mind.

I was out of my element from the moment the plane landed. One of the women who’d roared up on quads to unload the plane, seeing me standing idly by my bags, simply said, “Get busy.” That was my welcome. I got busy.

I was the only white person in a village of 150 Indians. None were particularly glad to see me. My host, Charlie Swaney, had intended to call and disinvite me. His best friend had been electrocuted 48 hours before. But he couldn’t find my number. Some of the younger hunters had already headed up the Chandalar River in flat-bottom jonboats to hunt for moose. There would be Gwich’in coming in from surrounding villages for the funeral, and no caribou had yet been seen in the area.

Being an outdoors professional, I busied myself doing the exact wrong thing at every turn. I donned my most extroverted and talkative mask, greeted strangers warmly, handed out cigarettes left and right. The cigarettes were wordlessly accepted. The talk and glad-handing, not at all. The Gwich’in don’t shake hands. The custom makes no sense to them. Nor are they unnerved by long periods of silence. What unnerves them is mindless chatter. Why speak if you have nothing to say? Every day I felt more intrusive, awkward, clueless.

The Gwich’in were nomadic hunter-gatherers as recently as the early 1900s. They believe that they’ve been following the same herd of caribou, the Porcupine River Herd, for 5,000 years, give or take. The only world that exists for them is the one around them: the Chandalar River and its tributaries; the small area lakes; the mountains they teach their children to use to triangulate and find their way home; and the endless tundra above the village. For hundreds of generations, they lived and died by how well they paid attention to what that world was telling them, by how well they trapped and hunted and fished and skirted danger. They made no distinction between work and play. There was only the world around them, with its rhythms of the seasons and caribou and other game.

After five days, we were supposed to go out on the tundra for caribou. We didn’t. By some common but unspoken agreement, the men had decided to spend the day we had intended to depart in the camp 3 miles above the village, drinking coffee and smoking cigarettes. I was becoming acquainted with “Indian time,” which has nothing to do with clocks and everything to do with knowing when the time is right. All Charlie Swaney said to me about the delay was, “When you hurry is when you make mistakes.” Up here, mistakes had consequences.

After a week or so, something in me started to shift. Almost unbeknownst to me, I was slipping into their world, into their reality and beliefs. I began to sense enormous forces at work here, unfathomable powers, as old as the Earth. You were at the mercy of these forces, not the other way around. It was unwise to risk offending them. When I noted all the caribou antlers lying about near camp—many covered in moss, slowly sinking back into the tundra—I asked Charlie why nobody had picked them up. He shrugged and said it wasn’t done. Then he told me about another white outsider, a young woman, who had visited a few years back and insisted on taking a few sets with her. “We told her not to,” he said. “We told her a couple of times. She did it anyway. A few years later, I heard that she got sick, and that lady, she died.”

I told Charlie I had no intention of picking up any antlers. And meant it as sincerely as I’d ever meant anything I’d ever said. I felt a mix of awe, fear, and wonder unlike any I’d felt before.

Such feelings don’t have a long shelf life after one returns to our world of too much information and too little thought. But I was lucky. Fewer and fewer of us ever get to feel them at all, to sense that what seems normal to us is actually impossibly strange and unlikely.