The Life, Death, and Rebirth of the .375 Weatherby 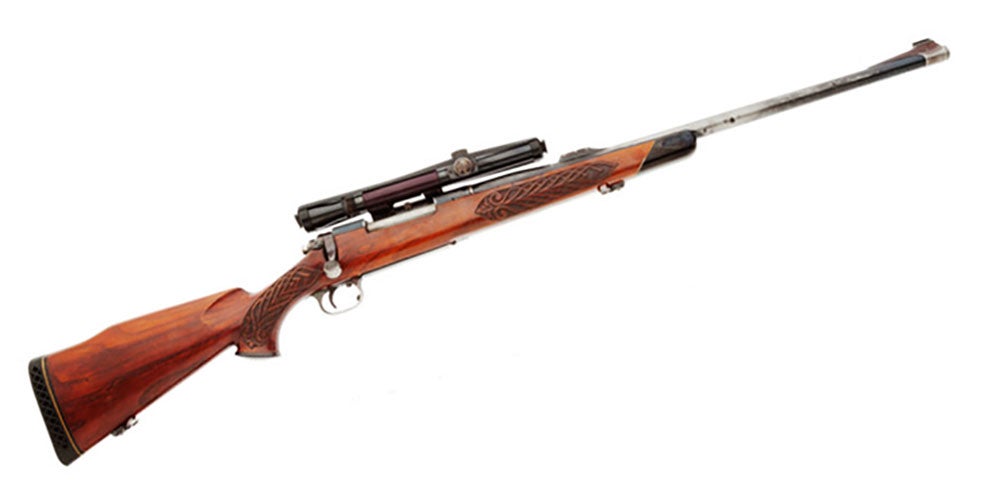 Long, long ago (1944), in a land that no longer exists called the United States of America, Roy Weatherby designed a new .375 cartridge to which he gave his name. He took the .375 H&H, blew out the case, gave it the radius shoulder that marked all his magnums, and declared himself pleased. By adding powder capacity, he raised the muzzle velocity (with 300-grain bullets, which are all that matter in this caliber) from 2,500 fps (that’s real-world velocity; often it’s less) to 2,800 fps. This gave the slugs the same trajectory as 180-grain bullets in a .30/06, and created something new—a dangerous-game round with reach.

Not everyone was pleased. Jack O’Connor wrote that improving the .375 H&H was like trying to improve Elizabeth Taylor. But around 1950, Warren Page got wind of the .375 Weatherby and had Roy build a rifle for it on one of the very early Remington Model 721 actions. Over the next two decades, Warren took that gun all over the world. As they say in the South, he like to wore it out. Page wrote, in One Man’s Wilderness:

“Unless my memory is slipping, the .375 Weatherby—which is merely an improved form of the Holland, about two hundred foot-seconds faster, not the hard-kicking .378—has so far accounted for five elephants, some three dozen buffalo, many of them on what amounted to control work for Mount Kenya ranchers, two rhino, three or four lion, five leopard, if we include a pair from India, two tigers, guar, wild water buffalo, and so on. A good many of these creatures are in the dangerous category, but I have not yet been eaten or stomped flat, despite charges from several of them while toting the souped-up .375.”

Warren told me he had burned three barrels out of his .375, which is a fantastic amount of shooting for a dangerous-game rifle, so who knows what else he shot with it.

Page liked the .375 Weatherby for two reasons: He hated recoil, and the .375 Weatherby kicks decidedly less than the big bores. And he knew that when you’re carrying a dangerous-game rifle with a practical range of 200 yards, something really worthwhile may turn up at 300, and it’s disappointing not to be able to shoot at it.

It was not so much the poundage that made the cartridge a terror to shooters, but the speed at which the rifle came back at you. I owned a .378 Weatherby Mark V, and the very first shot I fired from it bent my shooting glasses into a C-shape. It was a beautiful rifle, and very accurate. But I was afraid of it, and would always be afraid of it, so I sold the gun.

For seven years Weatherby made both cartridges, but in 1960 they dropped the .375. And then a funny thing happened. Some rounds are so good that they refuse to go away. The .280 is one such example; despite Remington’s moronic marketing of the cartridge, knowledgeable shooters knew it for what it was, and kept it alive. And so it was with the .375 Weatherby. In 2001, Weatherby brought it back.

Weatherby loads the cartridge to its original ballistics—a 300-grain Nosler Partition at 2,800 fps. Nosler loads the round with both 260-grain Accu-Bond and Partition bullets, which does not make sense to me. You get a .375 of any stripe for the 300-grain bullets. If you handload, of course, you can stuff it with anything you choose, and if there’s something wrong with you and you don’t handload, there are custom ammo makers out there who will whomp up whatever you like.

Weatherby makes synthetic- and wood-stocked Mark Vs for the cartridge, and dandy guns they are. However, both come with muzzle brakes. I don’t like muzzle brakes on dangerous-game rifles. If I were ordering one, I would have a talk with Weatherby about that. And I would bear in mind that Warren Page’s rifle had a 23-inch barrel, because Warren knew about dangerous game in the real world, and that the shorter your barrel (to a point), the longer you live.

The .375 Weatherby is a unique cartridge; I don’t think there’s anything else quite like it. I do know that if, somewhere, there’s something you can’t take on with it, I would trade my hunting boots for track shoes before I tangled with it.