The Washington Department of Fish and Wildlife issued a limitless catch, open to the public, with no restrictions on size... 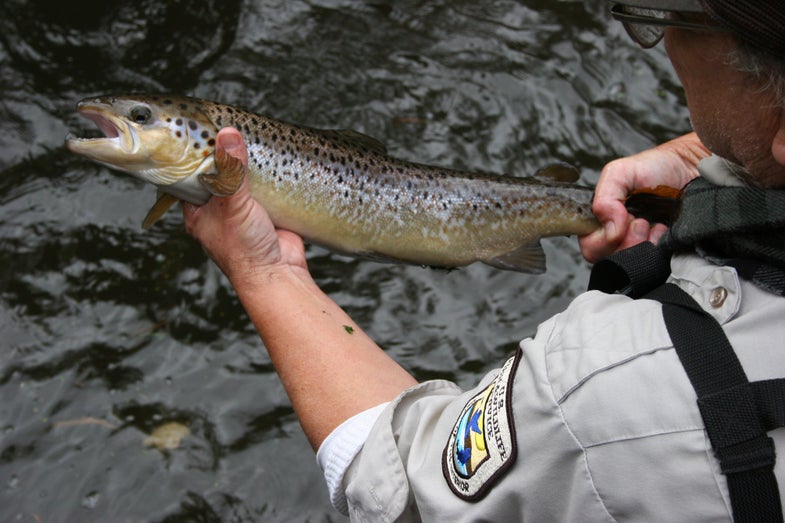 The Washington Department of Fish and Wildlife issued a limitless catch, open to the public, with no restrictions on size or quantity, after a floating net pen of farmed Atlantic salmon broke on Saturday at a fish farm near Washington’s Cypress island.

The breach originally let an estimated 5,000 10-pound salmon swim free, but the whole pen collapsed by the end of the weekend, releasing countless more fish into the waters.

“Our first concern, of course, is to protect native fish species,” says Ron Warren, Washington Department of Fish and Wildlife Fish Program chief. “We’d like to see as many of these escaped fish caught as possible.”

WDFW says there’s no evidence of Atlantics cross-breeding with Pacifics, but some anglers are still worried.

“It’s a devastation,” Ellie Kinley, Puget Sound fisher whose family has fished the region for generations, told the Times. “We don’t want those fish preying on our baby salmon and we don’t want them getting up in the rivers.”

The owners of the facility responsible for the breach, a Cooke Aquaculture fish farm, say the devastation is on their end. They called the structural failure a business loss caused by unusual weather conditions due to this week’s solar eclipse—a claim that was later proven false by scientists who were able to show that the tides remained normal throughout the lunar event, according to the Times.

Repairs to the nets were made in July of this year, and were anticipated to hold until harvest.

“Sunday afternoon, the whole thing came apart,” said Nell Halse, Cooke vice president of communications. “That is when we realized we were in a really serious situation. The numbers started out low and we still don’t know the full number, but there is clearly a lot of them out there. Very, very much more.”

Editor’s Note: This story has been updated from its original draft. It first detailed the initial leak in the fish farm’s floating pen, and has since been edited to include new information regarding the collapse of the entire enclosure.