Long Shots at Longbeards: TSS in the Field

50-yard shots at turkeys are now possible, but have they taken the excitement out of the hunt? Our shotguns expert reflects on his latest turkey hunt with some questions 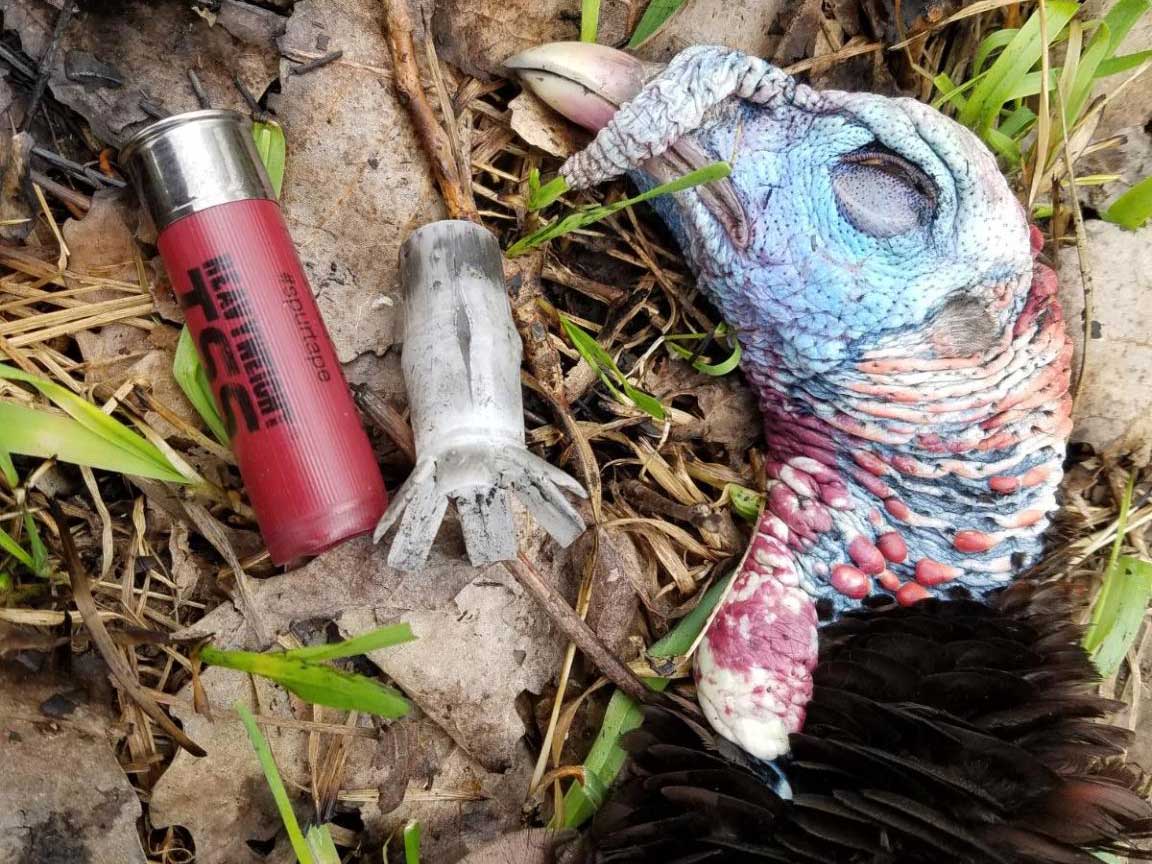 The turkey entered stage right and, after turning to my initial yelps, showed very little interest in any further conversation. Instead, it swung the decoys keeping a wide berth. It would stop, turn to show its fan at the jake and hen decoys briefly, come a couple steps closer, then turn and continue on its right-to-left path. It never gobbled. I don’t know if it was leery of the half-strut jake decoy, but it kept its distance.

After four or five of these non-committal struts, the turkey had walked past the decoys. I decided it wasn’t coming. I waited for it to stop and give me a clear view of its head and neck, and shot it at 57 steps. The turkey fell dead.

The load was 3-inch Federal Tungsten Super Shot 7s, and it was my first in-field experience with the stuff. It was also the longest shot I have ever taken at a turkey. Having patterned the ammo earlier in the week, I had no doubt it would kill at that range. TSS leaves tiny holes, but I found a few in the head. When you shoot a bird that far away, the pattern opens up some regardless of how tight the choke is, and some pellets hit the breast. I was surprised, and impressed, by how deeply those dense pellets penetrated a bird shot broadside.

TSS makes truly long shots at turkeys possible. The Federal 3-inch loads come in 1 ¾ ounces of 7, 8, and 9 shot in the tight-shooting Flitecontrol Flex wad. The 3-½-inch shells hold a full 2 ounces (and cost over $10 per shell!). Kent’s TK7, a tungsten-iron pellet that doesn’t have quite the density of TSS, shoots extremely well in my guns, too. Winchester Long Beard lead loads are no slouch at long range either. The 4s pattern very tightly in any gun I’ve tried them in and retain the energy for 50-plus-yard shots. Like it or not, the day of the long-range turkey gun is here.

The game-changing nature of these new loads raises a question: are long shots at turkeys ethical? If we define “ethical” as being able to make a clean kill, then I have to say yes, long shots are now ethical. In a gun like my 870, which is scoped and has had a trigger job, forcing cone and choke work, 57 steps is within its lethal range with the right shells. That’s a fact.

Read Next: Tungsten Super Shot Is a Game-Changer in Turkey Ammunition

But there’s another, equally important question: Is long-range shooting at turkeys rewarding? Based on this experience, honestly, not so much. The excitement of turkey hunting lies in fooling the bird so it comes close, in getting to see it strut and hear it gobble at 25 or 30 yards. Shooting a turkey at long range is like shooting the duck or goose that sets its wings but slides by the spread. It’s nowhere as satisfying as tricking that bird into backpedaling over the landing hole. What we gain in yardage with TSS and other ammo, we stand to lose in excitement if we shoot our birds as soon as they cross the 50-yard line.

Don’t get me wrong, I’m glad I shot that turkey. I hunt a public area that doesn’t have a ton of birds anymore. I don’t know where my next gobbler is coming from, and I will gladly take what the WMA gives me. In fact, I brought TSS on the hunt specifically because I wanted to be able to make the most of any opportunity I got. But, I have another tag, and I want the next bird to be about 30 steps closer than this one was. That’s the one I will remember all summer.