Stories of lost dogs finding their way home pop up in the news every so often. But what makes this... 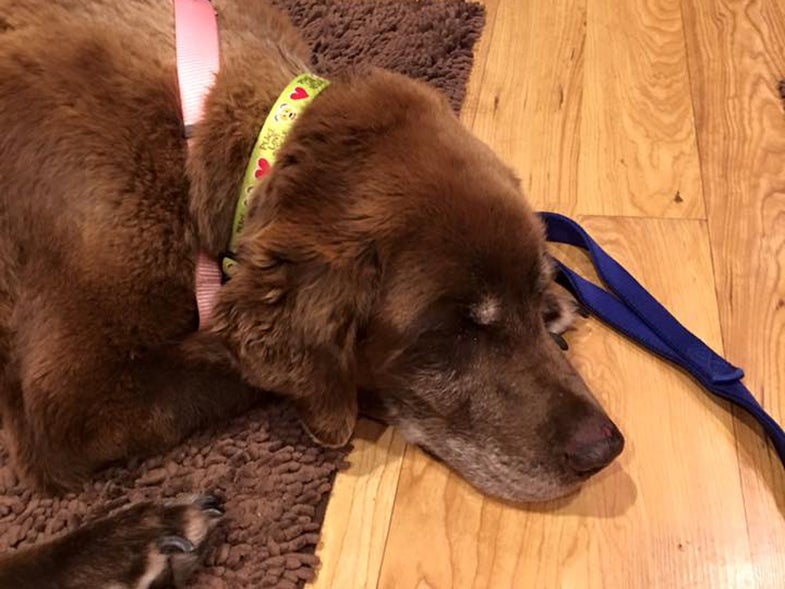 Stories of lost dogs finding their way home pop up in the news every so often. But what makes this story so remarkable is the length of time the dog was in the wilderness—nine months, most of them in winter.

According to the Idaho Statesman, the 12-year-old Chesapeake Bay retriever named Mo endured one of Idaho’s toughest winters in recent years. The dog was purportedly covered in ticks and extremely thin, but alive. “The way she looked, there’s no way someone was taking care of her,” Cheri Glankler, the woman who rescued the dog, told the Statesman.

The retriever disappeared in September while on a hunting trip with her owners Darwin and Cindy Cameron. The Cameron’s spent three months looking for Mo in the remote country north of Boise, but never found sign of her. Snow piled high, and their hope sank.

They knew that, owing to the dog’s hearing loss and advanced age, the odds of a reunion were slim.

But in late June, a Chesapeake Bay retriever was found on a ranch near Horseshoe Bend, Idaho, and taken to area woman Cheri Glankler for care. Glankler remembered hearing about a missing dog of the same breed months before, and posted on Facebook about the found animal, asking others to share the post if they knew someone missing a dog matching its description. Comments poured in, and in time Glankler tracked down the Camerons, who had followed many false alarms about their missing dog over the months.

When the Camerons visited Glankler, the dog “went to Cindy [Cameron] and pushed her head into Cindy’s belly,” Glankler told the Statesman. “Cindy was looking her over and looking for all the signs that this is Mo. A stitch in her right eye, her fatty tumor.”

After a close inspection, the Camerons concluded that the dog was, in fact, their missing Mo. The dog quickly demonstrated some of its old behavior, too, like sitting on Darwin Cameron’s foot, as she had always done before her getting lost.

Mo is now recovering and eating her way back to her average weight.