How to Flag Canada Geese into the Decoys

Want to get the attention of faraway geese? Flap a flag. Here's how it's done 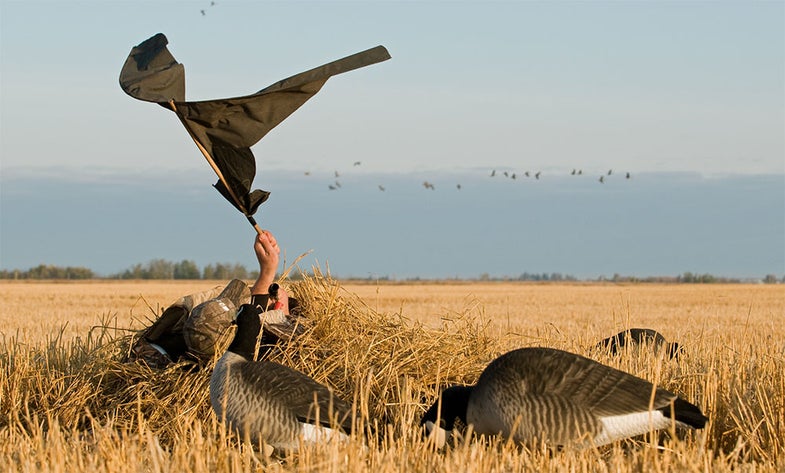 Want to get the attention of faraway geese? Flap a t-flag. Best $15 you'll ever spend. Bill Buckley
SHARE

One of the most effective decoys you can bring on a Canada goose hunt doesn’t get placed in the spread—it’s one that you keep right beside your layout blind. I’m talking about a flag. These simple, but lethal, T-shaped flag can be day-savers when the honkers just won’t commit to finishing. Here are the basic tips on how to bring geese into the kill hole with a flag.

If you can see Canada geese, they can see you. Start with the flag held high, and flap downward, using plenty of wrist action. You’re trying to simulate a goose beating its wings as it backpedals to land. Keep doing this, and don’t stop, until you get a reaction from the geese. At long range you need to grab their attention. Stand up in the blind, hold the flag over your head, and flap it vigorously all the way to the stubble. Keep at it until the geese turn toward you. Some flaggers run through the spread with the flag held high, periodically stopping to jig it down to the ground.

RELATED: Four Ways to Sharpen Your Shotgunning Skills With Clays

As soon as the flock turns, hide, but keep flagging. Many layout blinds have a hole in the side specifically for flagging with the cover closed. You don’t need to flag nonstop. Instead, watch the birds; if they start to slide off, flag to keep them coming. Tone down your motion, and it will resemble birds hopping over one another to feed or stretching their wings. One or two flaggers is usually enough for Canadas, but with snow geese, numbers matter; the more flags you’ve got going, the more realistic and attractive your spread becomes.

When geese are within 100 yards, get subtle. Lay the flag on the ground and twist the top upward to show a quick glimpse of wing tip. Do it when circling birds are “on the corners” swinging around your spread and not looking directly at the blinds. You want them to see the motion from the corner of their eyes.