Adam Hays was one of four hunters I profiled for a story we called “The 200-Inch Club” in the September... 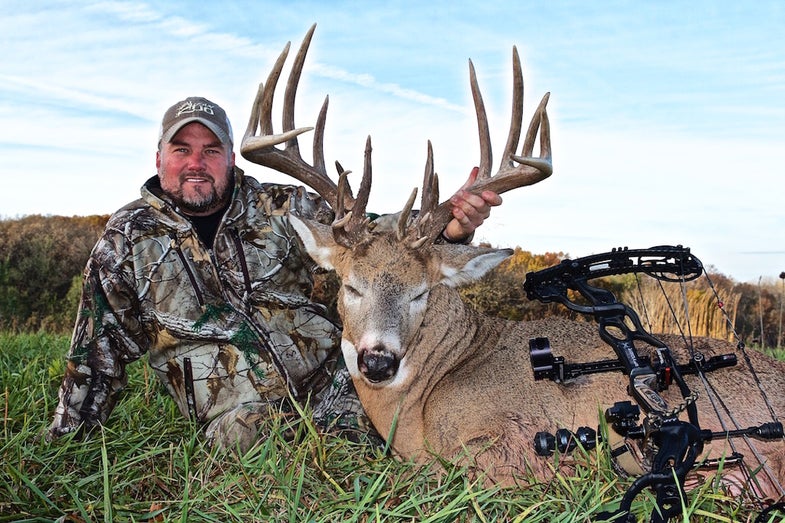 Adam Hays was one of four hunters I profiled for a story we called “The 200-Inch Club” in the September issue of F&S. When I interviewed Hays, an Ohio bowhunter, he’d killed three bucks that grossed over 200 inches. Last week he added Number Four, a Kansas giant that grossed 219.

While Hays has targeted many of his bucks in a long-term campaign, this year’s buck surprised him. “I had no pics of him this summer or early fall,” he says. “But when the corn harvest got going he showed up. We’ve seen that before; bucks that have been hanging out in fencerows and little patches all summer and fall suddenly shift when the crops come out. I got my first pic of him October 24, then again on Oct. 30 and Nov. 1. All the pics were in the middle of the night.”

Hays started hunting in early November, but hot weather as stifling deer movement. “I did rattle in a great 8-point to 30 yards one of my first days,” he says. “Normally I’d be happy to shoot him, but I knew about that other buck. Still, I really questioned my decision to pass that buck as the weather wasn’t helping one bit.”

But Hays also had a trick up his sleeve. Owner of the popular Moon Guide, Adam knew a “red moon” (when the moon is either directly overhead or underfoot during daylight) was coming up. On Nov. 5, with the moon guide predicting peak movement at 5:41, Hays headed to a stand near a creek bottom. “It’s a funnel that channels deer movement from four directions,” he says. “I got in the stand quietly, and at 5:43 I saw this buck approaching. I knew in an instant it was him. He worked down the creek and directly under my stand. I’d sprayed some EverCalm on the ground there, and for the longest time he was just too close to shoot.

“I had a great shot, but wasn’t exactly sure where I hit him at first. Fortunately he stopped after running off only 15 yards, and I shot him again. He ran into a cornfield and piled up after 50 yards. When I recovered him, my first arrow had made a perfect X through his heart.” The mainframe 6X6 sported 30 inches of nontypical points, and made Hays the only hunter known to have bow-killed four bucks over 200 inches (gross) B&C.