The aftereffects of hurricane Florence 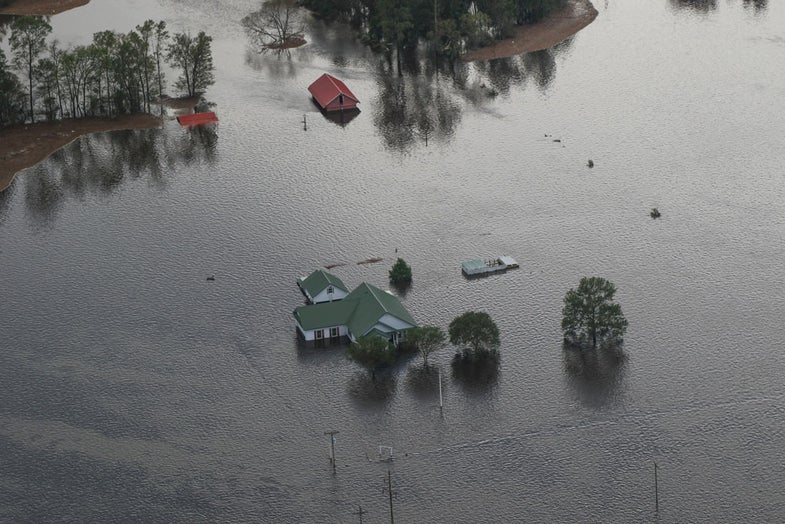 Hurricane Florence wasn’t that bad up my way. But from everything I hear—including during a conversation with T. Edward Nickens, in which he said his annual fall saltwater flyfishing trip had been cancelled due to all the pollution pouring into the sea—those folks must feel like they’re in an updated Old Testament story. Here are a few of the facts about Hurricane Florence in the Tar Heel state:

• Downgrading Florence from a Category 3 storm to a Category 1 led to complacency and almost certainly to increases in deaths and homelessness. That’s because the Saffir-Simpson rating scale—used almost universally by meteoroligists—only rates hurricanes by wind speed. Category 5 is the highest, with winds in excess of 157 mph, while Category 1, with winds from 74 to 95 mph, is the least dangerous. Unfortunately, it’s water—total rainfall, flooding, and storm surge—that do the greatest damage, not wind.

• Many towns received more than 30 inches of rain. Elizabethtown got 36. Say goodbye to that house you thought was “high enough to be safe.”

• The deaths of 48 people are attributed to the storm and its aftereffects, 37 of them in North Carolina.

• At one point, about a million North Carolinians were without power. Nobody knows how many are or were homeless. A lot of poor people say they couldn’t afford to pay for a motel room or restaurant food. They stayed put and are now poorer than ever.

Sound like a raft of something? Add that North Carolina is now beset by plagues of mosquitoes. There are more than 60 different species there, including a particularly nasty behemoth, Psorophora cliata, commonly known as a gallinipper, that is three times the size of the average mosquito and aggressive towards humans. They can bite through two layers of clothing. Florence evidently provided the perfect growing conditions for eggs that can lay dormant for years. One woman who had just picked her daughter up from school shot a video as she waited outside her own house. Any insect that you can see in a smart phone video is pretty darn big. Her daughter mistakes them for “wasps.” She sits inside her vehicle, knowing that she’ll have to cover up her child and herself and make a break for the door eventually.

The most heart-breaking part? About 23 seconds in, the exhausted mother, who sounds like she’s on the verge of tears, still finds it in her heart to worry more about others than herself. After a long, wordless pause, she says, “I hope not everybody is having to deal with this.”