The 11 Most Iconic Hunting and Fishing Hats 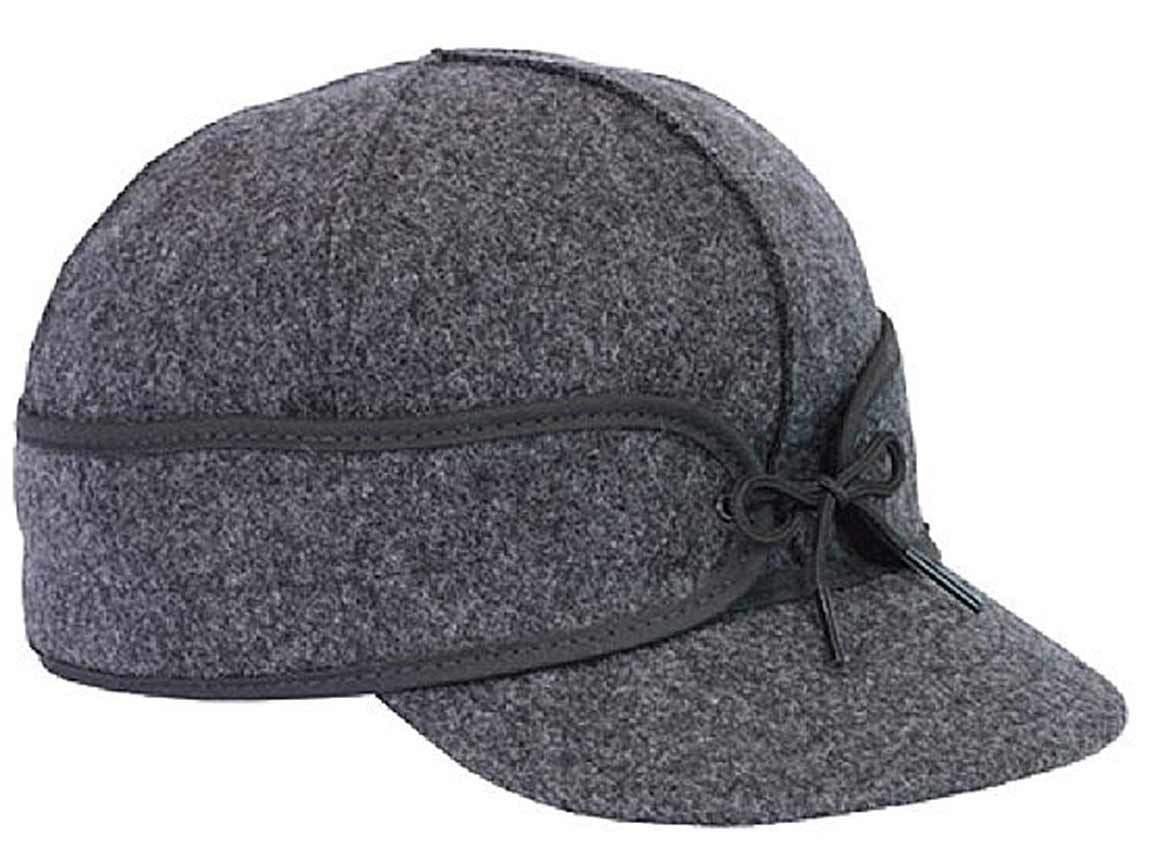 Choosing an outdoor hat is serious business, and not just because your cranium takes the brunt of sun, wind, rain, and snow. Your hat choice holds some of the clues to your personality—who you are, and who you think you are. Here are 11 iconic outdoor hat options, to protect your noggin and show off your style. Proceed with care.

The foam-backed trucker’s hat is all the rage at the moment. Amazon

If you were to set out from scratch to build a hunting and fishing hat to do it all, you’d probably come pretty close to the standard-issue baseball cap. There’s enough front bill to block the sun and hide your face from a turkey at 10 steps, but no back brim to get in the way of stretching out on a rock for a midday snooze. It’s smashable, packable, breathable, and cheap—although most of us own at least one baseball-style hunting or fishing hat that we wouldn’t sell for a hundred bucks. Trucker’s hats are the current rage, but they’ve only been around since about the 1970s. The foam-backed tall front piece made it easy to attach logos, and they were given away at feed stores and truck stops by the, er, truckload.

The classic boonie has a strip of fabric around the crown for adding natural camoflauge. Amazon

It would be easy to dismiss the floppy, low-tech boonie as a serious outdoors hat, but for its history. Introduced in 1967 to U.S. forces during the Vietnam War, it was quickly adopted by the Green Berets and has since capped soldier’s heads around the world. It has a wide, ribbed brim that seems to droop sooner than it should, with a strip of fabric around the crown for stuffing leaves and branches in to break up the wearer’s silhouette. Named for the boondocks, where we all want to spend our free time, the boonie has been manufactured in every camouflage ever devised—which currently numbers at 6,247,398 trademarked patterns.

Faux-fur hats with real tails, like the one shown, go for under $20; the real thing is typically $75 and up. Amazon

You’ve got to hand it to ol’ Daniel Boone: The man had class. He hated coonskin caps, which were sort of a precursor to the Trapper’s Hat (below). Boone wore a battered felt hat, instead, but the coonskin cap still caught on. Davy Crocket wore one, as did Fess Parker when he played Davy Crockett on TV. Meriwether Lewis may have worn one on his journey of discovery. A portrait of him painted a year after his return from the West shows him in a fur cap with not one, but two, tails. But consider this: Scut Farkus, the bully Ralphie beat up in A Christmas Story, wore a coonskin cap. So did Uncle Fester in the original Addams Family television series. So, think about that when you see one and think, hmm, maybe? Maybe not.

The Filson Tin Cloth Wildfowl can be worn up or down.

Like the Stormy Kromer (below), you’ve got to have a bit of gravitas to pull off a Filson Tin Cloth Wildfowl hat. A few crow’s feet. A couple rough drinking stories. At least that’s what I tell myself, because a drab-olive Wildfowl is my go-to duck hunting hat. For starters, wearing one is like sticking your head in an oven. After 15 years of putting mine on I’m still amazed at how warm it is. The low-peak brim is just enough to blunt the sun when it slips over the top of the blind, but affords totally unobstructed sighting down a shotgun barrel no matter how contorted the shot. It’ll turn away everything but a hard rain, and you can stomp this virgin-wool hat down muddy and wet in your duck bucket the last day of the season and pull it out eight months later and it will be none the worse for wear. A little musty smelling, maybe, but slip it on and you will feel as if you’ve fallen into the arms of your mother. $85; filson.com 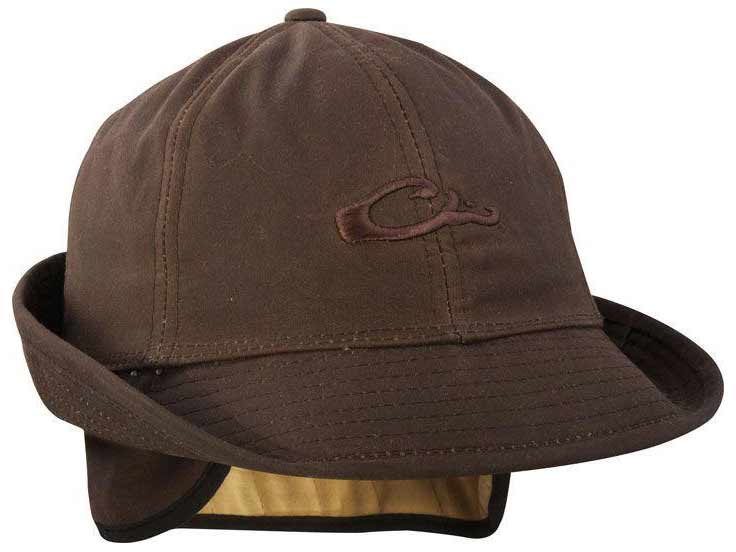 This throwback Jones-style cap is one of only a few still made.

It makes no sense that these hats have largely vanished from the field. The original came out in 1881, built by the long-gone Jones Hat Company of St. Joseph, Missouri. But for decades practically everyone made what was called the Jones-style hat, with its a stiff 2-inch brim that peaked in the front and folded up in the back and worked in every imaginable hunting situation. As recently as the 1960s they were common—in red-and-black wool plaid, brown cotton duck, even that fancy new stuff called Gore-Tex. Then the Jonesy disappeared like a swamp buck. Weird. Praise be to Drake Waterfowl Systems, though, which introduced a throwback waxed-cotton (and a separate Gore-Tex version) Jones-style cap a few years ago that is simply perfect. $30; drakewaterfowl.com 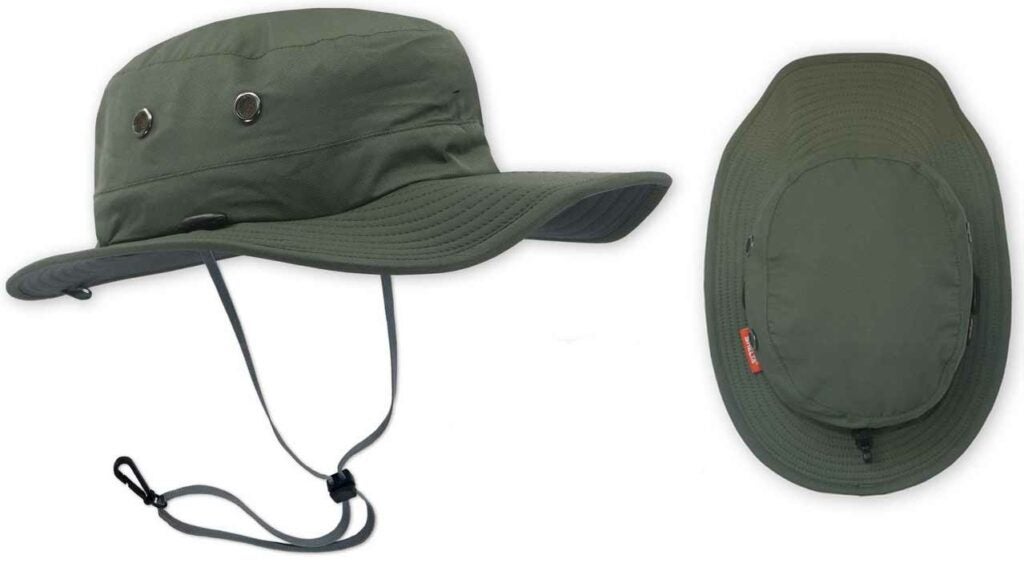 Shelta fishing hats are meant to stay on in heavy winds or even if you fall into the drink.

The best thing about these “performance sun hats” is the rigid front brim that will not flop in the wind, but there’s a lot more to like than just a stiff upper lip. Designed by an avid surf paddler, they’re built to stay on in heavy winds and even water dunkings. There are four models with varying widths of the side brim, with a choice of a boonie crown or a 5-panel crown with venting. If you’re looking for more face shade than you get from a baseball hat, and a cowboy crown just ain’t your thing, Shelta hats are the ticket. $70; sheltahats.com 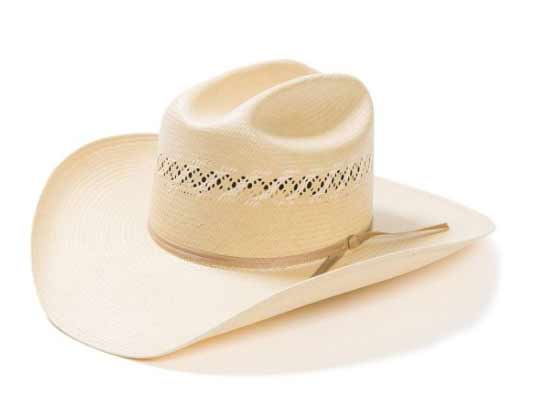 Other models are better suited for hunting, but this Jace 10X is perfect for summer fishing.

Not everybody can pull off a cowboy hat, but everybody dang sure wants to. It’s an ageless design, suited for ages 8 to ancient, but only if you’re suited to the hat. John Batterson Stetson introduced his first model in 1865. It was called “Boss of the Plains” and looked almost like an overgrown bowler. Some historians figure that Mexican cowboys added a wider brim for shade and curved edges to stay out of the way of a whirling lariat. There’s always been a whiff of attitude associated with the cowboy hat, and folks who don’t live up to its reputation are derided as “all hat and no cattle.” So proceed with caution. For a fishing hat in all-day summer sun, it’s hard to beat a Jace 10X vented straw cowboy hat from Stetson. $117; stetson.com

This uber-classic lid was developed by the wife of a train engineer name George “Stormy” Kromer, who hacked the standard ball cap design for a snug-fitting hat with earflaps that wouldn’t blow off when he stuck his head out the locomotive window. It was so favored by railroad workers that the family cranked up their own millinery business, and the Stormy Kromer began its migration to hunting camps practically everywhere. They’re still made, by the original company, but be forewarned: You have to be legit to rock a Stormy Kromer. Not everyone can pull it off. But everyone who does is pretty much unforgettable.

You need be one heck of an outdoorsman to pull this look off. Amazon

It’s curious that a lid that goes by the derisive nickname “Elmer Fudd hat” was also the chosen brim of Leonid Brezhnev and KGB operatives waiting under darkened bridges and Siberian railroad crossings with ballistic daggers in hand. Or so I hear. The trapper hat is sort of a mashup between the Russian ushanka, which means “ear-flap hat,” and the aviator-style hats of the early decades of open-cockpit flight. They are super toasty, but to avoid looking like a butthead, you’d better be dragging out a 10-point buck before you put one on. Or be ice-fishing, during which looking like a butthead is entirely appropriate. 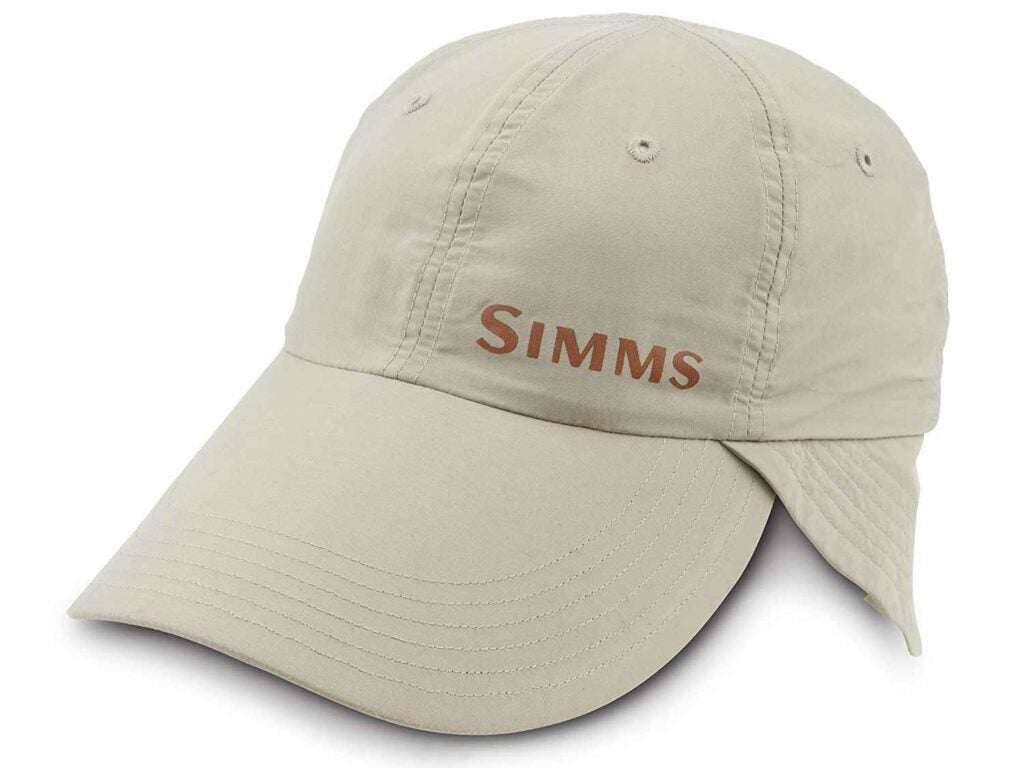 Simms’ Lefty’s Lid up-downer is, sadly, no longer made.

Famed flycaster Lefty Kreh came off as a bit frumpy until he unfurled what seemed like a quarter-mile of fly line with all the theatrics of cleaning out a thumbnail. His signature up-downer long-billed fishing cap traveled with him to the four corners of the fishing Earth, perhaps the most recognizable fishing hat of all time. Sadly, the true up-downer is now as rare as a wind knot in a Lefty Kreh leader. Simms once made a Lefty-approved up-downer it called Lefty’s Lid, but no more. There are long-billed caps galore, but you’d be hard-pressed to find a simulacrum of Lefty’s. Perhaps that’s fitting, because he was one of a kind and never to be duplicated.

Like many other awesome outdoor gear items (I’m talking to you, red-and-black plaid), the watch cap has been co-opted by urbanites and the coffee-shop culture. Tread carefully. Famed bowhunter Chuck Adams has taken twice as many Pope and Young animals as anyone else on the planet, but he’s still barely able to get by with this dandy little rolled up knit topper. But even if you can’t pull off a neatly rolled watch cap day in and day out, every hunter gains a bit of street cred by capping off the deer opener with a blaze orange Carhartt watch cap.