Movie Review: “They Shall Not Grow Old”

With a fanatical insistence on accuracy, director Peter Jackson chronicles the horror and misery of being a British soldier in WW1 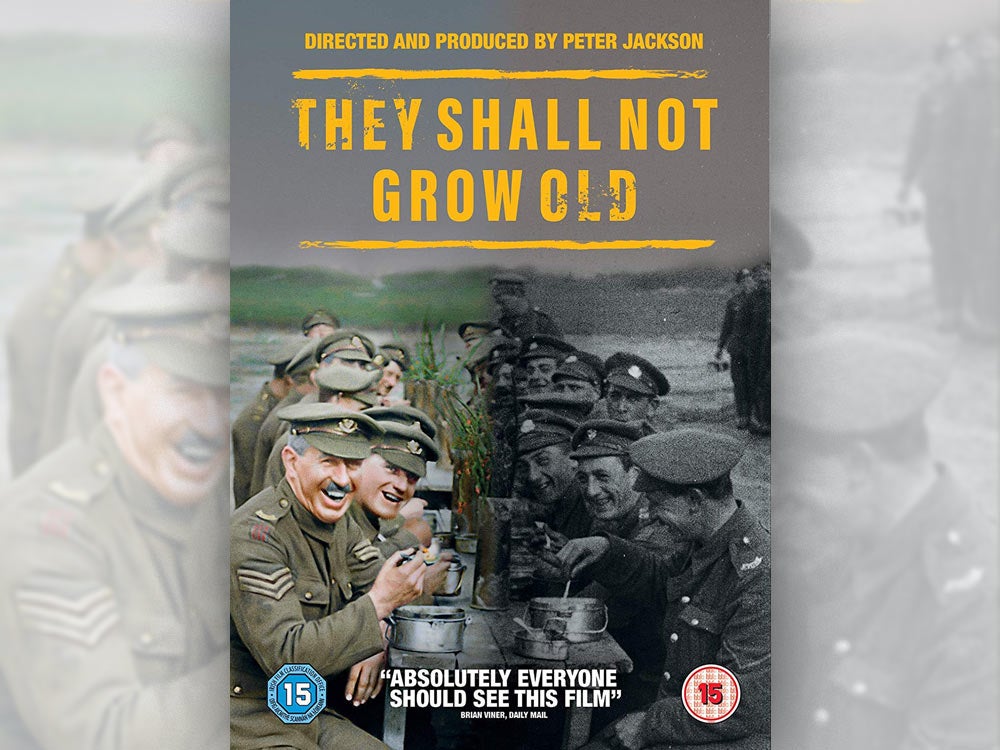 The DVD jacket of They Shall Not Grow Old. Amazon
SHARE

In the summer of 1914, the heads of state of Europe and Russia (at least three of whom were undeniably dim-witted) decided to have a war. They had not had one in quite some time. This one, they assumed, would be like the others: Some territory would change hands; some unfortunate thousands would die; but it would be a matter of a few great battles. Generals would be made field marshals. Colonels would be made generals. When it was over, there would be parades.

The war came in August of that year, but it did not work out as planned. It lasted four years. The total number of military deaths is estimated at 9 to 11 million. The civilian death toll is about 8 million. The total number of casualties—dead, wounded, and missing—military and civilian, is probably 40 million. The heads of state had not factored in the machine gun, rapid-firing artillery, chlorine, phosgene, and mustard gas, radio, tanks, airplanes, barbed wire, smokeless powder, or flamethrowers. The generals and the field marshals were clueless. The British alone took 60,000 casualties on the first day of the Battle of the Somme.

In 2015, Oscar-winning New Zealand movie director Peter Jackson was commissioned to make a documentary on the Great War, drawing on 100 hours of film footage from the Imperial War Museum and 600 hours of radio interviews with British veterans made by the BBC in the 1960s. The resulting film, They Shall Not Grow Old, does not recount battles or strategy. It employs no historians or statesmen. It’s simply restored footage, accompanied by the voices of the men who did the fighting. The film shows us what it was like to be a British infantryman in World War I, nothing more. And nothing less.

The films of WWI that we’re accustomed to are silent, black-and-white, or badly colorized. They Shall Not Grow Old, however, is equal in quality to color footage from Vietnam. It’s nothing short of miraculous. The “miracle” took place in a New Zealand studio from 2015 to 2018, and is a combination of computer magic and a fanatic insistence on accuracy.

The colorization you see on television is done fast and cheap. This colorization was slow and painstaking. British khaki and German feldgrau uniforms were brought into the studio to show the computer what shades to use. Peter Jackson toured Belgium and France and took over a thousand photographs to get the color of the grass and trees right. A sound crew recorded the cannon fire of a New Zealand artillery unit, so the reports of the guns, and the whistle and roar of the shells in the air, and the explosions, are real. The film speed, which varied all over the place and accounts for the jerkiness, was adjusted to 24 frames per second, and everyone moves naturally.

In some footage, you see soldiers speaking. Jackson employed forensic lip readers to figure out what they were saying. Then, the Army unit was identified, as, say, the South Wales Borderers; so a narrator would be found who came from Monmouthshire, Herefordshire, or Brecknockshire, and had the correct accent, to replicate what was spoken. Thus were the dead given their voices again.

For the closing credits, the music chosen was Mademoiselle from Armentieres, but if the studio crew in New Zealand sang, it would sound like New Zealanders. So a call was made to the British Embassasy, and a singing-impaired chorus of Brits was assembled who sounded like Englishmen because they were.

They Shall Not Grow Old is a chronicle of horror and misery. There are rats, and torn stomachs, and smashed skulls, and rotting corpses, and mud, and trenchfoot, and eerie green clouds of chlorine gas, and impenetrable tangles of barbed wire. And there are a few moments that will truly stop your heart:

The voice of a soldier whose comrade, terribly wounded, begged to be killed. The narrator obliged him.

A soldier waiting to attack who is plainly terrified, and the voiceover of a British officer describing such a man who became hysterical before the whistle to go over the top, whom he ordered to be shot before the hysteria spread. We learn later that the Tommy on the screen was almost certainly killed, because his entire battalion was wiped out in the attack.

A sergeant, staring the thousand-yard stare, whose right hand shakes uncontrollably as he stumbles to an aid station, his war plainly over. The hand trembles just like Captain John Miller’s hand in Saving Private Ryan, except that was acting and this is real.

The voices of several soldiers, describing how, when they returned to England in 1918, they were treated like dirt (“No veterans need apply.”), and that no one cared about what they had been through, or could remotely understand. The only ones to whom they could speak were their fellow survivors. This may sound familiar.

When They Shall Not Grow Old ended, it was so quiet in the theatre that you could hear breathing. There was some uneasy applause. The audience had not been ready for what it had seen.