“We hold these truths to be self-evident,” wrote Thomas Jefferson at the beginning of the Declaration of Independence, “that the... 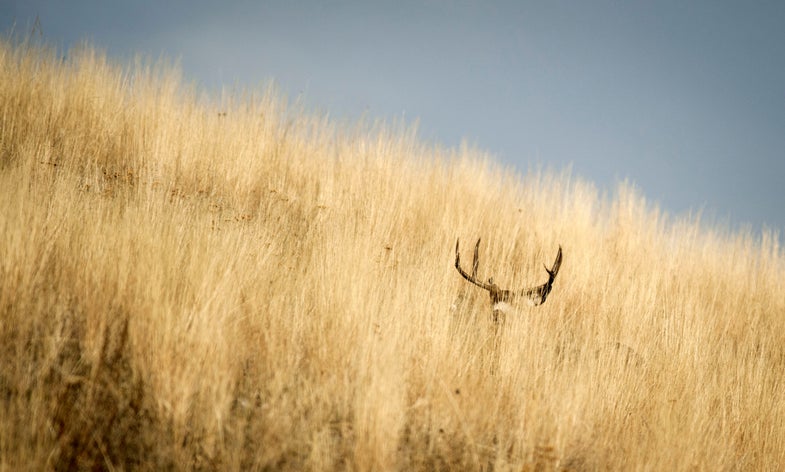 Buck in the long grass: A muley hides on a ridge. John Hafner
SHARE

“We hold these truths to be self-evident,” wrote Thomas Jefferson at the beginning of the Declaration of Independence, “that the Clintons get away with it…” No, that would have come later. Anyway, when you shoot and hunt long enough, some truths do become self-evident, and it’s nice to see them reconfirmed from time to time.

My most recent was a mule deer hunt near Great Falls, Montana, with former guide Chad Schearer. I was looking for an elderly, well-fed buck for eating purposes, one who would no longer pass along worthwhile genes to the herd. It would be sort of like shooting myself. In the course of pursuing this beast, I saw once more that:

1. If you know the land you’re hunting, and how the deer move on it, you’re 90 percent of the way there. On the first morning, it poured cold rain from 6 until 11, and then a 30 mph wind came up. In addition to missile silos, this chunk of Montana supports a massive deer population, both mule and whitetail, and while we saw a few, it was obvious that they were bedded down and were not going to come out until the rain quit and the wind lay down. Chad said, “We can drive all over hell and not do a bit of good, or we can go where they hang out and wait.”

We drove to a deep coulee, maybe ¼-mile to the bottom, and saw nothing, but Chad, having hunted this land for 25 years, knew the beasts were there, and so we he parked the pickup with the front uphill so that the seats reclined farther, and we took a nap. Eventually, the wind tapered off to occasional gusts. We went back to the brim of the coulee and waited, and sure enough, heads with antlers on them began popping up. Eventually, a head connected to a set of declining antlers at one end and a big fat body at the other appeared, and so he made the transition from elder statesman to steaks and chops.

2. If you’re in an area, where there are a lot of deer, you don’t have to take the first shot that offers itself. Before the old-timer that I shot stood up, two other nice bucks emerged from the sagebrush, about 200 yards away, and walked and trotted away from us. That, combined with the gusting wind, made for bad odds, and because I had two full days left I held fire until I got a shot at one that was 199 yards away and not going anywhere.

3. But on the other hand, sometimes they vanish. We were hunting in an area that’s home to oodles of deer, and the morning after I had killed mine, we took a ride to look them over. It was a beautiful, cool, windless morning, and we saw…nothing. Not one. They were there, but they were hiding for reasons that can be known only to deer. When that happens, there’s nothing to do but wait until things change.

4. If you can’t shoot from prone, try kneeling. That’s what I did. It’s not quite as steady as sitting, but you can get into it quicker, and it gets you above the sagebrush and rattlesnakes.

5. A little weight in your rifle is very often a good thing. I hunted with the same wood-stocked Bergara B-14 Woodsman that I blogged about earlier this fall. With a Meopta 3X-9X MeoPro scope on board, it is a pretty hefty firearm, but this weight meant it did not shake, quiver, or blow in the wind.

6. Somewhere, perhaps on some other planet, there may be a better deer cartridge than the plain old .270. However, I have no idea what it might be. I got my first .270 in 1973 and have never looked back.

8. I’ve shot a bunch of game with 150 SSTs, and believe it is the compleat bullet. It hit the big deer (250-260 pounds) in the short ribs on the left side, ranged forward, punching holes in both lungs, and exited just behind the shoulder on the right side. The bullet may, in fact, have broken that shoulder; it was flopping around suspiciously. The deer kicked convulsively, ran maybe 40 yards, and piled up. You can’t do better if you’re a bullet. Unfortunately, SSTs don’t cost a bundle, but then nothing’s perfect.

9. Ship your rifle ahead via UPS. Who needs the airline b.s.?

10. If you’d like to fly an airline that will screw you up, fly United. Traveling from Maine to Montana there were three flights. All three took off late. The three flights returning were all on time, but my duffle bag was left in Newark, and I got it the next morning. Going back through my nearly 50 years of air travel, United stands alone in its ability to leave luggage behind.