This tool will help you hunt, fish, and hike longer and more comfortably 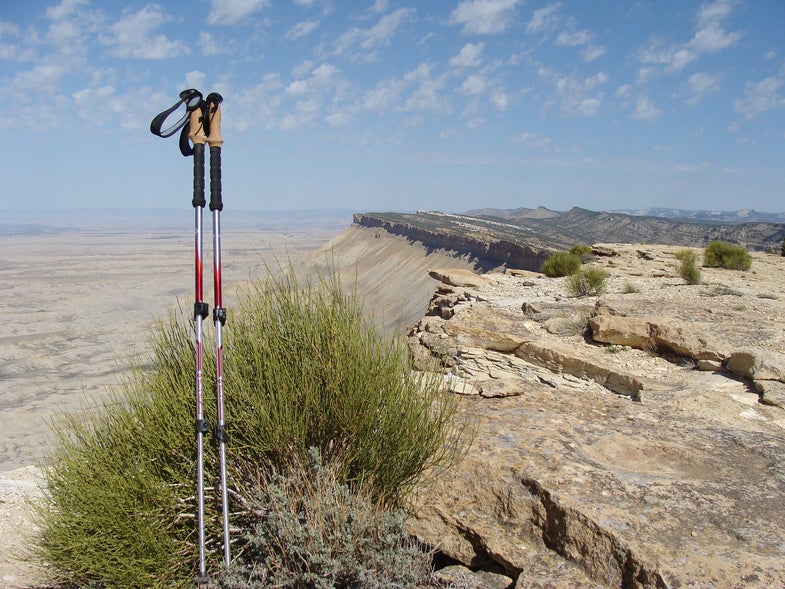 Hiking poles: Your legs, knees, and back will thank you. By Jimmy Thomas/Flickr
SHARE

I became an instant convert to trekking poles last weekend. It was a transformational experience, especially going downhill. When you come to a long step down, you can lean forward, plant both poles, and lower your foot down instead of taking a tiny but bone-jarring airborne leap. Michelle and I were almost giddy at the difference, both agreeing that we’d been fools to wait so long to try them out. It was like turning back the clock ten years on my legs, knees, and back.

We were in the Blue Ridge Mountains of southern Virginia, had already done a good hike the day before and were headed towards another. We had both iced, ibuprofened (yes, it’s a verb now), and made medicinal use of bourbon the night before, but our lower bodies still felt like they should be in a museum. It was, we agreed, the downhill that had hurt most. We were mindful of this when we happened by a sporting goods store, where we spotted and picked up two pairs of Black Diamond Trail Series poles. The ones we got were aluminum, with three adjustable, telescoping pieces. Collapsed, they measure about 26 inches, short enough to strap to a daypack. They weren’t cheap, about $100 a pair. (Black Diamond makes at least 17 styles of trekking poles, ranging from $55 to $190. Leki and REI also make poles.)

They were worth every penny. While studies on the mechanical advantages of trekking poles are mixed, virtually all agree they reduce lower body stress. Long used by European hikers, poles have been catching on in this country steadily. And not just among guys with man buns and girls with tattoos. Jason Hairston—the guy who co-founded Sitka Gear and who is now running the hugely successful Kuiu (pronounced “koo-yoo”) brand of ultralight hunting gear—is a fan. A former NFL player who grew up bowhunting, Hairston considers sheep hunting the ultimate test of a hunter’s skill, stamina, and drive. I’ve never met him, but in pictures he looks like a beast, all muscle and determination. He’s been using poles since 2014 and now offers a pair ($200 Leki Micro-Vario Carbon poles) on his company’s website.

Among the advantages Hairston lists are reduction in strain to hips, knees, and feet, better balance on uneven terrain (think knife-ridge walks with a heavy pack, hopefully carrying horns), and the ability to test the step ahead of you before committing weight to it. He cites the time that the only way he could quietly approach a sheep bedded several hundred feet below him down a granite face was to inch his way down an avalanche chute full of loose, softball-sized scree. Had he dislodged a single rock, the sheep would have busted him. He writes that it was his trekking poles that enabled him to do this. And then, incidentally, he missed the shot.

He was probably bowhunting, since one of his favorite trekking pole hacks is to use them as shooting sticks. Maybe there’s a pair in your future. I’m as cheap as they come, but if something extends my years, comfort, and range outside, to me it’s a bargain.