Recently, a friend who lives out West asked me if I could answer some questions about this muzzleloading double. His... 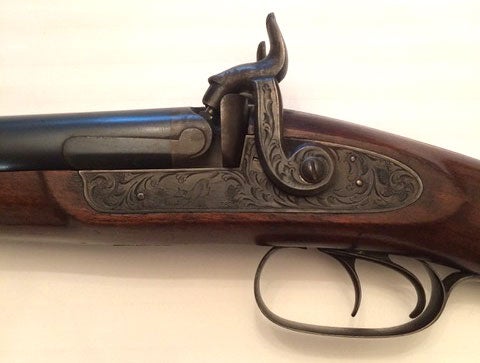 Recently, a friend who lives out West asked me if I could answer some questions about this muzzleloading double. His neighbor knocked on his door and gave it to him more or less out of the blue. The neighbor knew only that the gun was made in New York, “in one of the prisons” sometime in the early 1900s. It’s a 12 gauge percussion-gun, with fluid steel barrels, a curly maple stock, and hand engraving, including the steel buttplate. The only markings on it anywhere are a very faint lettering that looks like “M.H.” It’s in such good shape; my friend says he’d have no qualms about shooting it right now.

The first and most pressing question: Why doesn’t anything like this ever happen to me? Friends, neighbors, and random acquaintances should give me guns. Yet they never do.

Second, and perhaps more important to the rest of you and certainly to my lucky friend, what is this gun?

The lack of proof marks does suggest the gun is American. Certainly, that a gun would be made in New York around 1900 is no surprise, as the New York-Connecticut–Massachusetts region was the center of U.S. gun-making. The idea that a gun would be made “in the prisons” is a new one to me (“Carbine” Williams excepted), but I guess it’s possible prisoners used to make guns instead of license plates.

Perhaps one of you out there can I.D. this gun. If not, you can look on the photo below and admire the workmanship and wish that you too had neighbors that would bring over muzzleloading shotguns instead of plates of cookies.