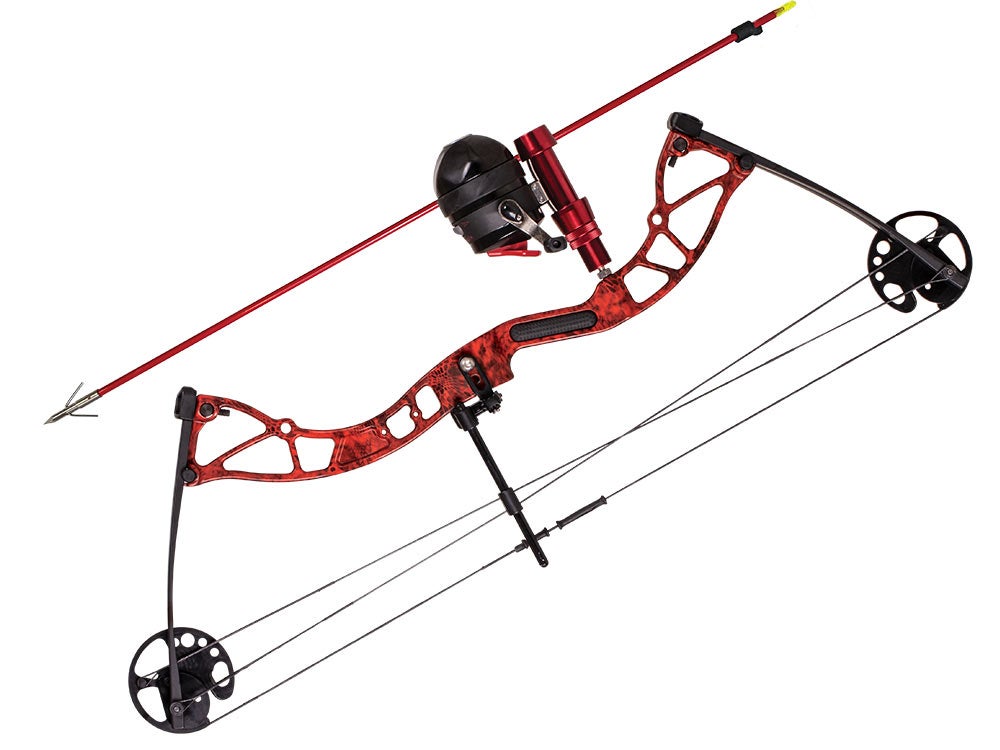 The ATA Show isn’t just about the newest in flagship compound bows, 400 fps-plus crossbows, and the latest in treestands and trail cameras. There’s plenty of stuff here for the bowfishing nut, too. Online editor Ben Romans and I are both on the water shooting fish whenever warm weather allows. Romans is usually plying clear, western waters for big common carp, while I’m after invasive silvers and bigheads in the Mississippi River basin. Both settings are hell on equipment—but this stuff seems like it’s up to the task. —Will Brantley

This new mid-level compound bowfishing package from Cajun combines a rugged, constant-draw, 60 percent let-off bow that’s adjustable from 15 to 45 pounds with a 17- to 29-inch draw length range. The package comes with a Brush Fire Arrow Rest, Spin Doctor spincast reel, finger pads, and a red fiberglass Pirahna arrow. No press is needed to make adjustments to the bow, and it’s drilled and tapped for riser-mounted reels like the Cajun Winch or AMS Retriever. For anyone looking for a dedicated fish rig without spending a fortune, this one is a good bet.—W.B. 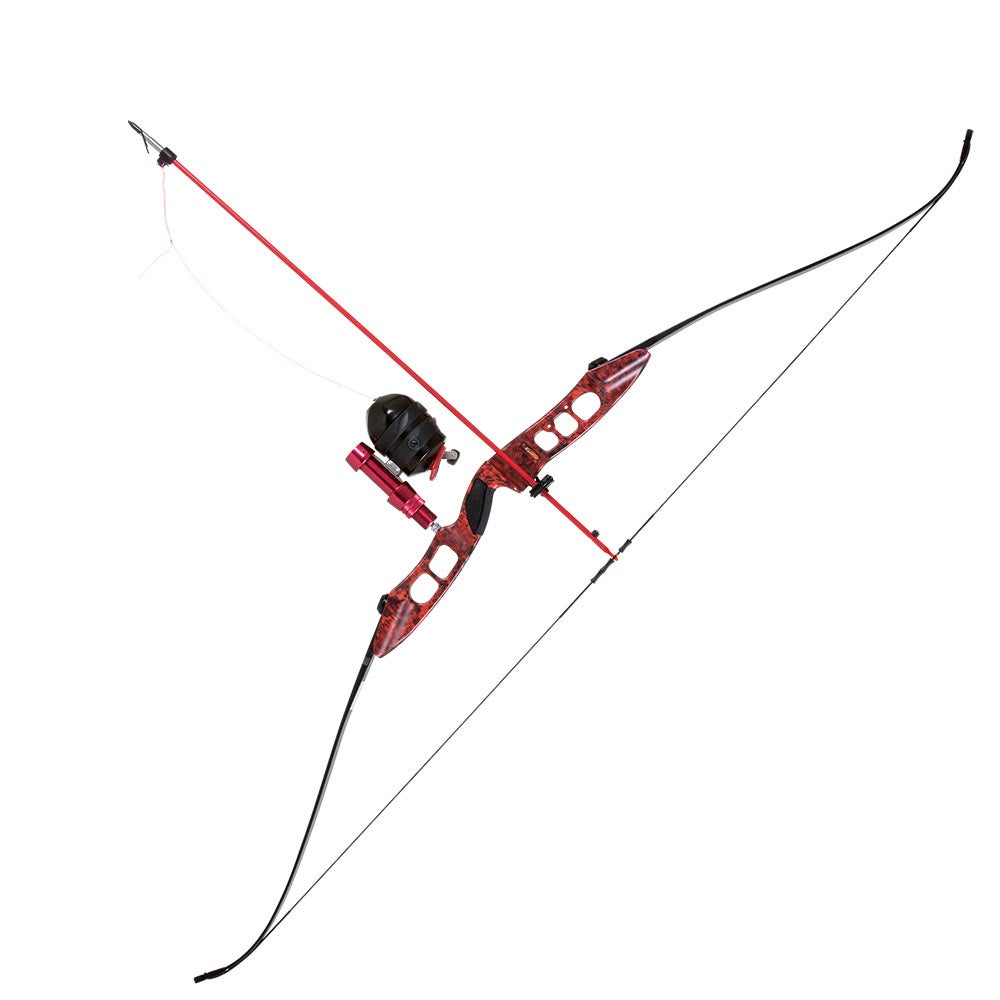 Not every bowfishing situation calls for the power of a compound. I learned to shoot fish with line wrapped around a coffee can, screwed into the riser of a pawnshop recurve. It worked just fine for shooting shallow-water gar and carp. This new model from Cajun is built with a machined aluminum riser, so you don’t have to worry about ruining a wooden recurve, and it comes ready to go with a Spin Doctor reel, 150 feet of line, fiberglass arrow, and finger savers for the string. It’s a take-down bow, too, with 45-pound limbs—so it’d work just fine for stashing in the boat on those days when you want to go crappie fishing, but want to have a bow handy in case the carp start rolling, too.—W.B.

The problem with large, soft-fleshed fish like bighead carp and paddlefish isn’t penetration—it’s the arrow point tearing loose during the fight. Often, the more big barbs you have, even at the cost of reduced penetration, the better. That’s exactly what this new stainless steel, 4-barb head from Cajun is designed to do. This point isn’t fancy: shoot through a fish, unscrew it to remove the arrow, reattach, and shoot again. But if you’ve ever had a 50-pound bighead on the line, you’ll appreciate the extra hold the four barbs provide.—W.B. 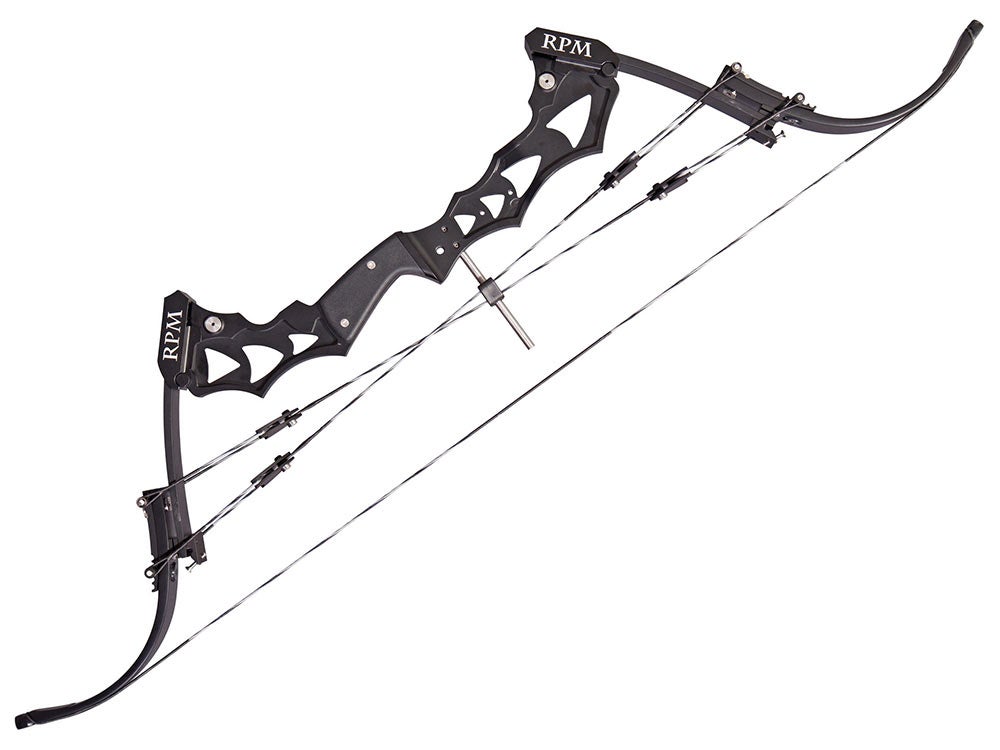 When archers think about great bowfishing destinations, Idaho might not even be on their radar—which is great if you’re a bowfisherman living in Idaho. The fact is there are some terrific carp fisheries in the lower half of the Gem State, and over the years, it’s been the perfect laboratory for Pocatello-based RPM Bowfishing to test and refine their lineup of bows, shafts, points, and reels. The company’s new Striker bow just happens to be one of those products debuting in 2019. RPM said they set out to create the simplest, most unintimidating bow on the market, which is why they skipped the cams, made it easy to tune, and tied it all together in a package that weighs just 4 pounds and comes in two different draw lengths and two draw weights.—Ben Romans

Another product worth noting from RPM is the MX-1 reel. You might recall Field & Stream reported the reel’s debut last year, so while it’s not new for 2019, myself and a few carp-arrowing cohorts had the chance to use this reel through the 2018 season. I’m happy to report that while we grinded through the gears and components of other reputable reels, the MX-1 took a beating and asked for more. It’s not only durable; it’s easy to use. The line free spools during the shot, and retrieves are easy thanks to an ergonomic “T” shaped handle that engages gears. And since it has a 3.5 to 1 gear ratio, hauling in buglemouths or bare skinned arrows is fast and easy, leaving you more time to prepare for another shot. If you didn’t check out the M1-X last year, you owe it to yourself to run it through the wringer this year.—B.R. 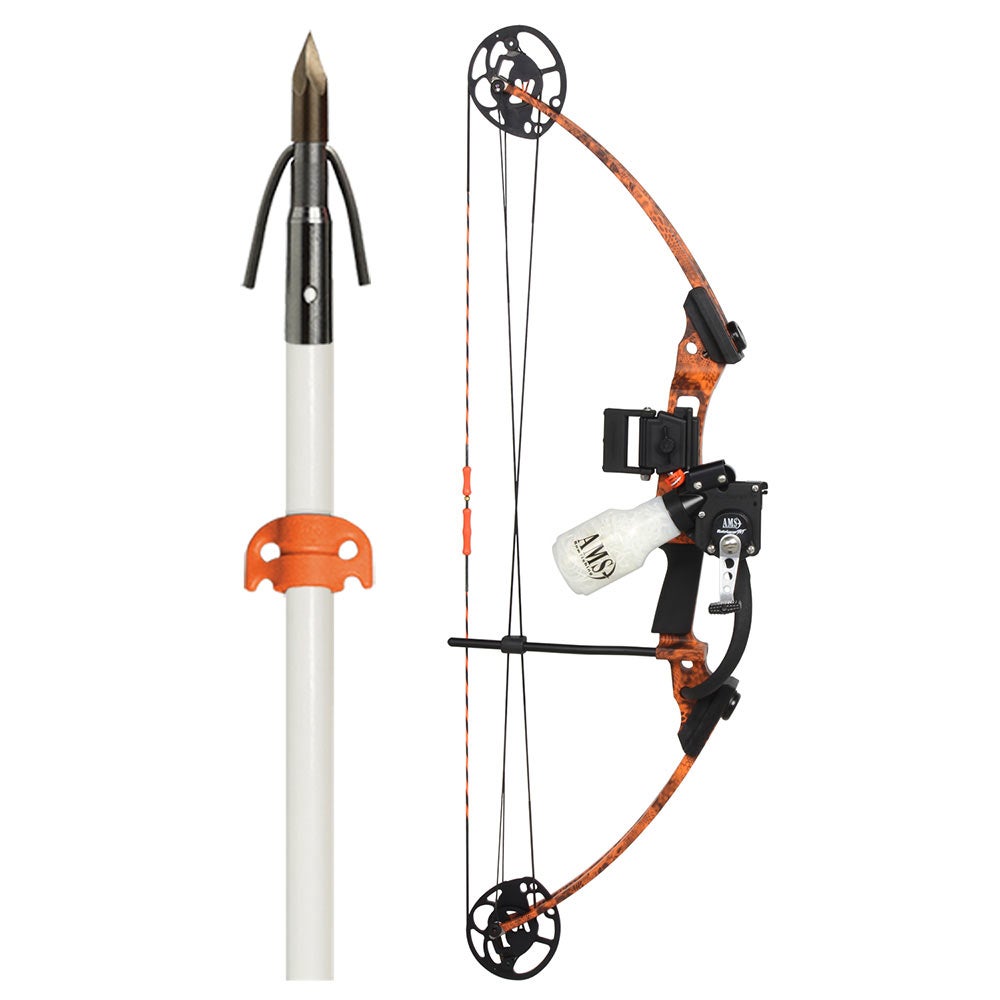 This dual-cam, zero let-off bow from AMS features the new RAP Cam system, which can be adjusted without a press to optimize the cam efficiency at 40- or 50-pound peak weights (the draw weight range is 24 to 50 pounds). The bow weighs just 3 ¼ pounds, and it comes ready to hit the water with a powder-coated riser and stainless-steel hardware. It’s available as a package with a TNT Retriever reel, Tidal Wave rest, finger tabs, and a fiberglass arrow tipped with the Chaos FX point. If shooting jumping silver carp is on your bucket list, this would seem to be a pretty good setup.—W.B.

Continuing to expand its Madfish series, PSE is adding the new Mudd Dawg bowfishing bow to the lineup in 2019. PSE’s goal was to create an affordable bow that still had upscale components and features important to bowfishers like stainless steel hardware, an easy to draw cam system, and a lightweight design. The result is a suburban-salmon slaying machine that weighs just 3.6 pounds, has a draw weight of 40 pounds, and an axle to axle length of 32 ¼ inches. What’s more, its available in two different packages. The Cajun package includes a bottle reel, One Snap rest, finger savers and a One Fish Stick arrow with a ring slide. The Reel package has a RT-3500 reel and seat, One Snap arrow rest, and One Fish Stick arrow with a safety stop and slide.—B.R.

TruGlo has been making bowfishing accessories for a couple years now, but this point is cool enough to warrant a mention. It’s a 320-grain hardened stainless-steel point that is strong and sharp (I can vouch for that last detail, because I nicked my palm on the point while looking over it in the TruGlo booth). But the coolest thing about it is the spring-loaded barb system, which holds the barbs in place while ramming them through a fish, but allows for rapid reversal and arrow removal. I’m not quite sure how the system will perform once covered in scales and slime—but I’m betting a can of WD-40 could solve most problems.—W.B.

Bowfishing kits are great if you’re new to the sport of bowfishing, or you simply need a fast solution for lost or broken gear while you’re on the water. If that sounds like you or someone you know, check out the new Vice kit from Muzzy. While it’s only made for shooters that draw with their right hand, the bow itself weighs just 3.8 pounds, has draw length adjustments between 24.5 and 31 inches, and you can toggle the draw weight to anywhere between 25 and 55 pounds. The reel is Muzzy’s tried-and-true XD Pro model spooled with 150 feet of 150-pound test line, all perched on an integrated reel seat. The fiberglass arrow is tipped with a quick-release carp point, and a pair of green rubber finger guards make quick shots painless, even with wet hands.—B.R.

Read Next: 8 Must-Have Items for Bowfishing 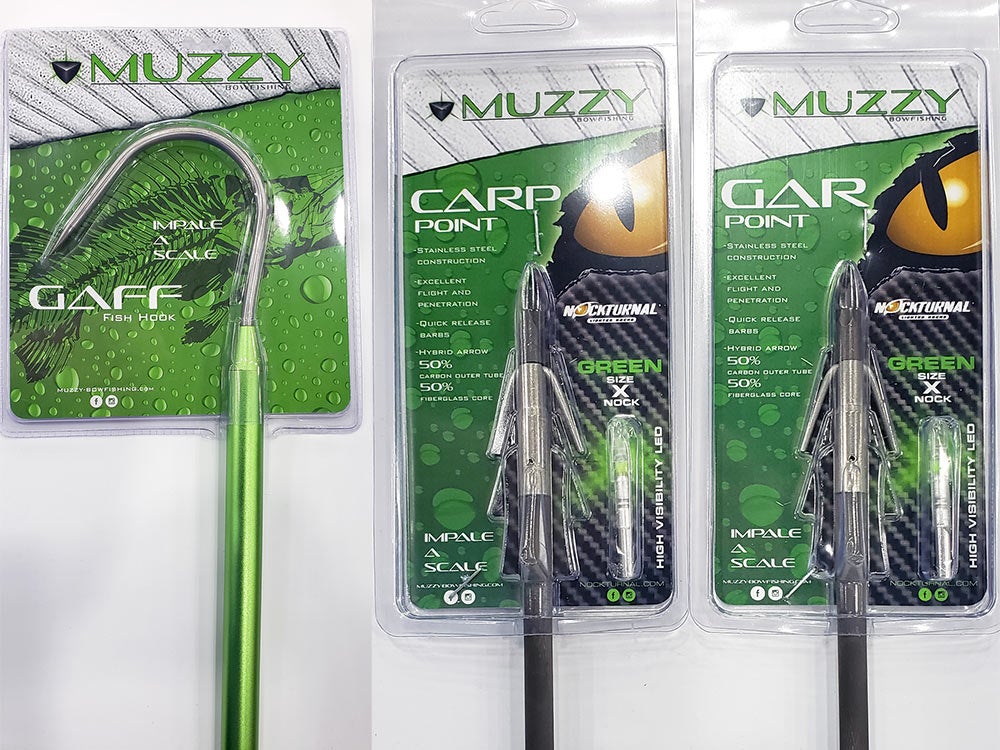 Another noteworthy development for 2019 is the pairing of Muzzy arrow shafts and points with Nocturnal green lighted nocks. Options in the new lineup include either a carp or gar stainless steel point with quick-release barbs, a hybrid arrow shaft that’s 50% carbon and 50% fiberglass, and a size X nock. After you use one of Muzzy’s new arrows to let the air out of a sewer bass, you can use Muzzy’s new Gaff Fish Hook to finish the job. This hefty hook is made of aluminum and stainless steel, and a tip that’s sharp enough to pierce through anything from a common carp to the toughest alligator gar armor you encounter. 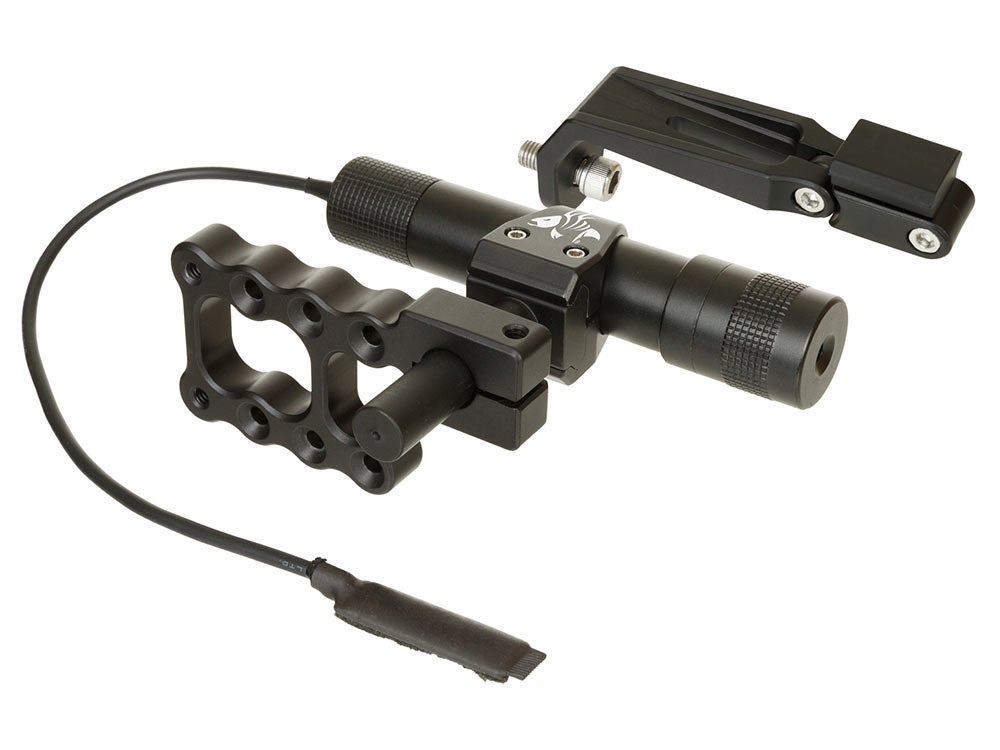 I admit the first time I saw a bowfishing laser, I couldn’t wait to try it. But after experimenting with a few different models, I lost faith in the concept. Manufacturers claimed lasers took the guesswork out of bowfishing shots, but I found I still had to compensate for refraction and distance, and hitting my mark wasn’t as “point-and-shoot” easy as they claimed. That said, Fin-Finder says they’ve found a solution to those problems and their new Rrefractr BLS laser sight compensates for refraction so there’s no need to place the green dot above or below a fish, depending on shot depth or distance, in order to make a clean hit. The aluminum unit is waterproof and a CR123A 3V battery powers the 5mW green light, which is activated by a wired pressure switch. The package also includes stainless steel hardware to mount the sight and stabilizer.—B.R. 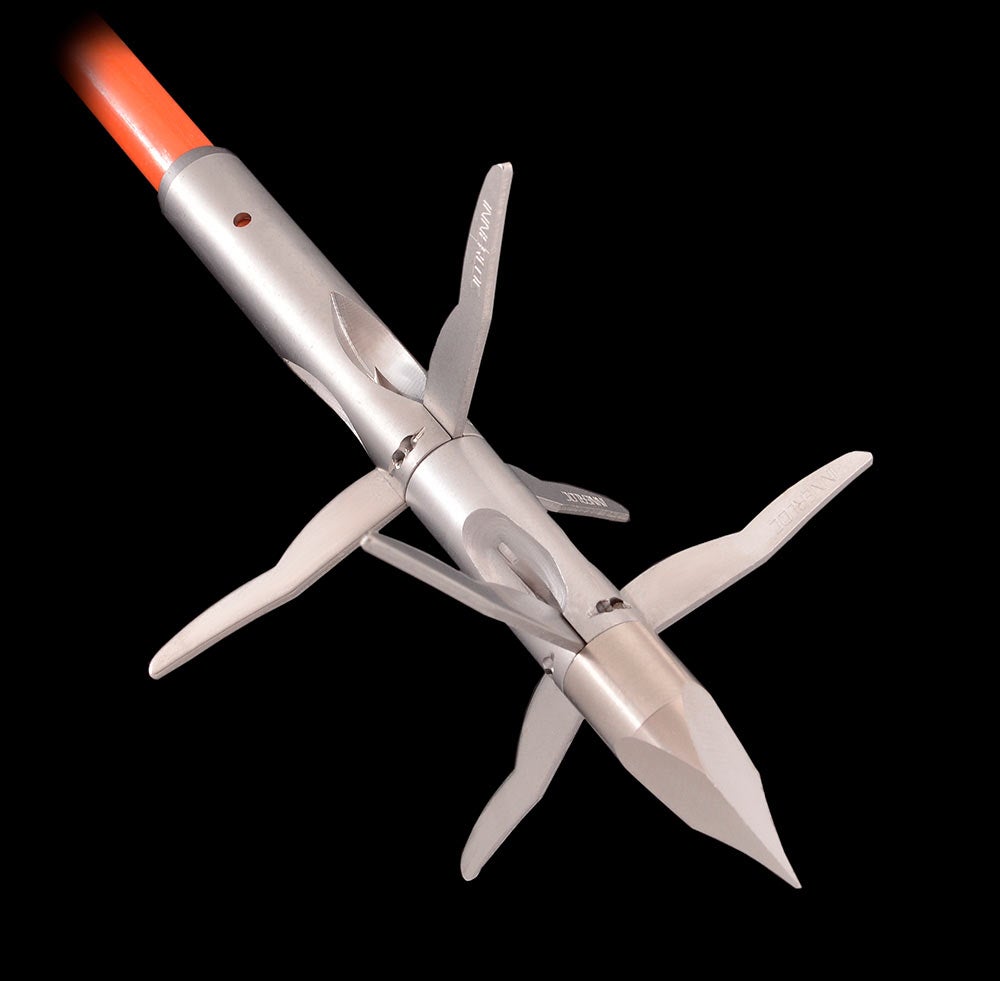 I have lost count of how many seemingly perfect bowfishing shots ended with the fish popping off, so naturally, I’m always on the lookout for a new head that not only penetrates, but refuses to let go. That’s why the new DX2 adapter from Innerloc caught my eye. The first thing I noticed was the oversized barbs—they’re huge. Then I noticed how many barbs there were; six total, each pointing at a different angle. When I asked for more information I learned the DX2 isn’t really a head—it’s an adapter that fits on Innerloc’s Grapple, Gator Grapple, and Gripper points. The additional weight of the DX2 will help penetrate big, rough skinned fish, and Innerloc says their patented anti-vibration technology prevents unscrewing and lost points.