I have attended the ATA show for over 25 years, and in all that time I have never seen any... 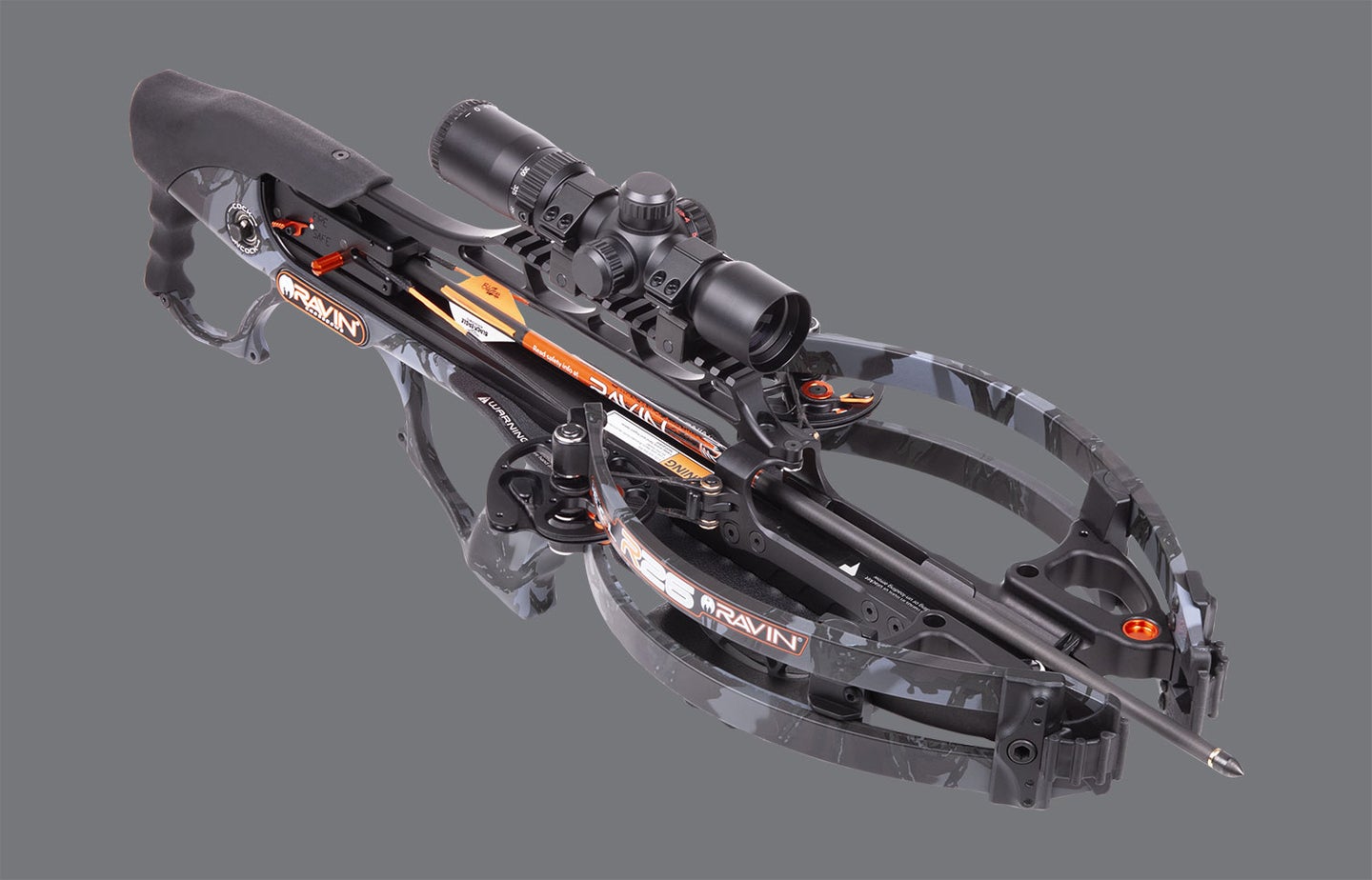 I have attended the ATA show for over 25 years, and in all that time I have never seen any category of gear advance more quickly than crossbows have in the last half-decade or so. Innovations in vertical bows could be measured with a micrometer of late, whereas bumps in crossbow technology require a yardstick. Here’s a look at some of the hottest new models from the 2019 ATA Show. 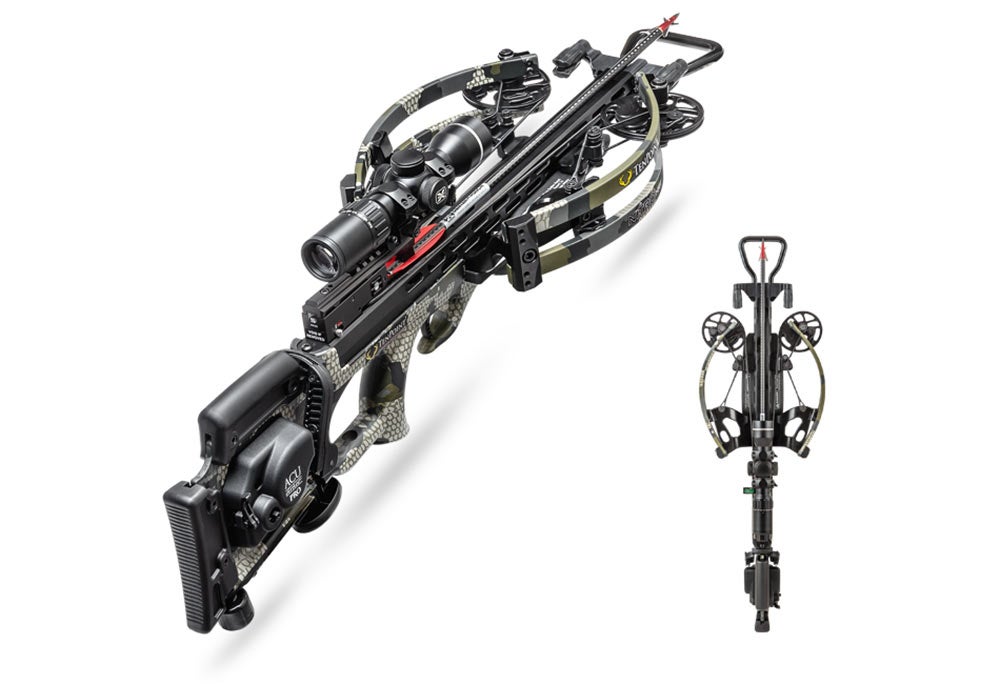 The Lowdown: The reverse-limb design of the Nitro XRT proves that TenPoint has not only fully embraced that technology, but builds it as well as anyone. Like all of TenPoint’s flagship crossbows, this one is packed with high-end features like the Acudraw Pro, which makes drawing the bow a snap. The EVO-X Marksman scope features an etched reticle, fully-multi-coated lenses, and an impressive 14x magnification, which should help shooters achieve the bow’s touted 1 MOA accuracy.

First Look: The trick in designing a great-shooting reverse-draw crossbow is balance, and TenPoint has nailed it with the Nitro. In addition to being a flamethrower, the Nitro’s slim profile and easy handling make it a dream option for hunting from blinds and tight-cover situations. Yes, it’s expensive, but if you want top-end performance and some of the best accessories on the planet, it’s worth it. $2,549; tenpointcrossbows.com

The Lowdown: As the name suggests, the new Furious Pro is a slim-profile (9.5 inches axle-to-axle at full draw) bow that’s also very fast. The Hogue™ grip and UltraStealth Cheek Weld™ promise to improve shooter interface, and the ProTrigger is advertised to break at 3 pounds or a touch under.

First Look: I’ve got a soft spot for any crossbow that’s packed with performance at an affordable price, and the Furious Pro is just that. In addition to hitting the 400-fps speed threshold, the bow balances very well and its ergonomics help the shooter get on target quickly. If the trigger were a little crisper, this would have been among my show favorites. $749; killerinstinctbows.com 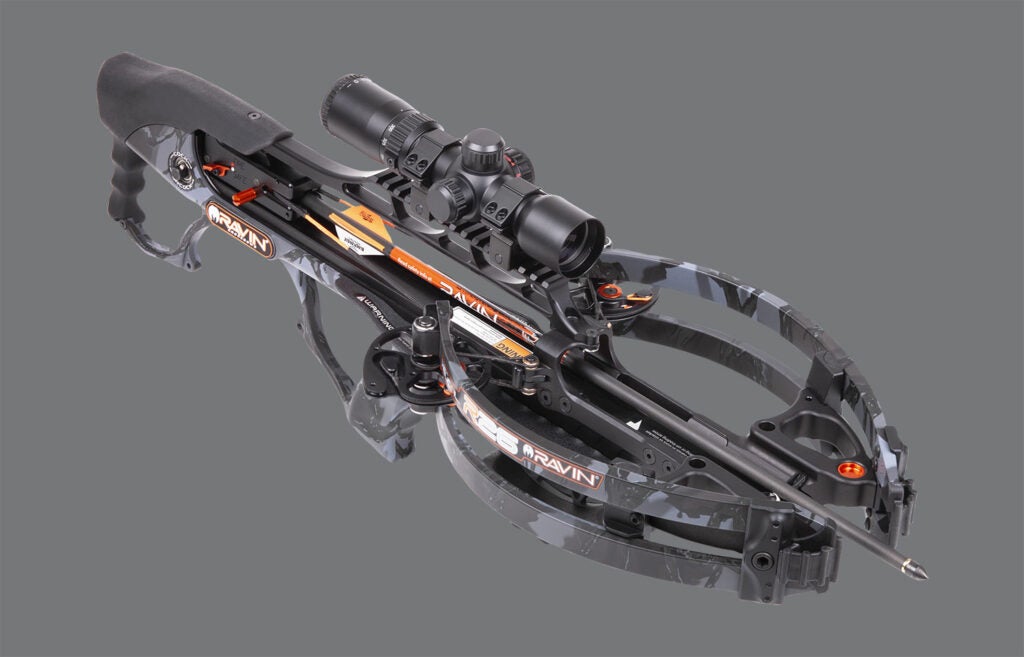 The Lowdown: Designed on a bullpup stock, the R26 is an amazing 7 inches shorter than any previous Ravin model. Using the same Helicoil Technology™ employed on last year’s bows, designers were able to create a short-platform model with a mere 5-¾-inch axle-to-axle length at full draw, easily the slimmest-profile crossbow on the market. And despite only a 9-½-inch power stroke, the R26 launches a bolt at 400 fps. The ambidextrous Versa-Draw™ cocking system makes cocking and de-cocking a snap; the Trac-Trigger™ firing system grabs the precise center of the string on every cock; and the Frictionless Flight™ system allows the arrow and string to free-float above the rail.

First Look: Ravin made a huge splash at the 2017 and 2018 ATA shows, so I figured they’d have a tough time creating the same buzz this year. I was wrong. The R26 is short enough that it inspired all kinds of effusive remarks (including F&S executive editor Dave Hurteau’s comment, “I’ve caught trout longer than that bow”). This, of course, would mean nothing if the bow didn’t handle and shoot well. But in the short time I spent with the R26 at the range, it seemed like a true hunter’s bow—well-balanced, maneuverable, pleasant to shoot, and accurate. Yes, it is expensive, but this is the most advanced crossbow on the market, and while there are other companies charging as much, none of them offer a bow you can literally stuff in a backpack. $2,049, ravincrossbows.com 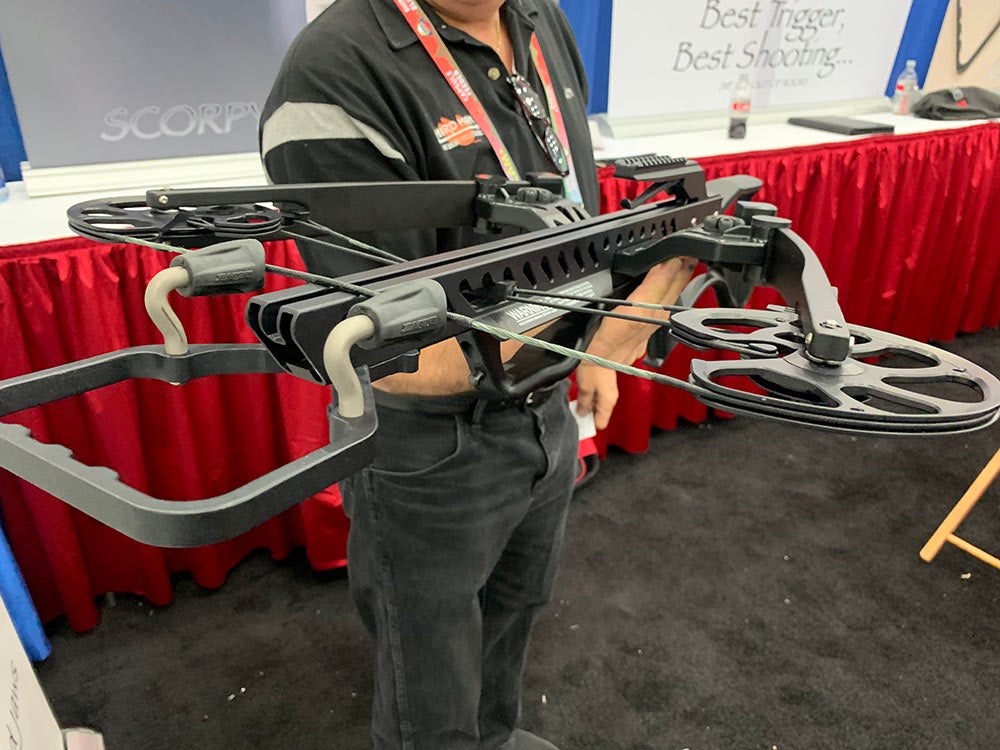 The Lowdown: Scorpyd was a pioneer in reverse-limb crossbow technology, and they’re not taking their foot off the gas with the Nemesis, which can torch a bolt at 480 fps. That’s with a 370-grain arrow, but even with a heavy 465-grain shaft, it’s still at 400 fps. The trigger is adjustable and features a Sear-LOC system for strength and security. New this year are a Hogue 1911 grip, spots to place Mathews’ harmonic dampers to reduce noise and vibration, and a housing that will accept an Accu-Draw cranking system.

First Look: I thought the trigger was the best of any crossbow I shot at ATA. And, man, is this bow fast. I loved the new grip, which taps into the popularity of the AR-rifle trend and gives shooters some options. The ability to add a crank system is a smart touch; if the company had made it standard, the bow’s price would soar to over two grand, but as an option it gives shooters a choice. $1,899, scorpyd.com 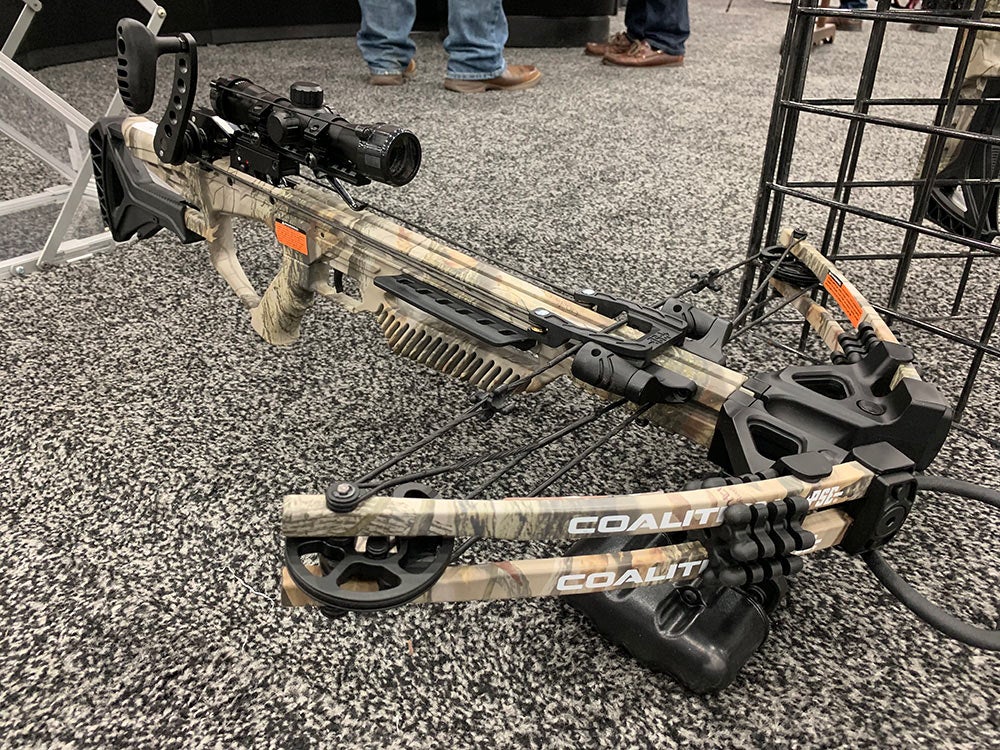 The Lowdown: The Coalition features a new adjustable stock and a pass-through fore-grip for improved safety and better handling. Also new is a housing that will accept an Accu-Draw cocking device.

First Look: If we had a budget-crossbow shootout, the Coalition would be a serious contender. There’s plenty of speed and performance here for a bow that costs a fraction of most company’s flagships. While I found the two-stage trigger a little too spongy for my liking, it didn’t seem to affect my accuracy. The Coalition is light and well-balanced, and I played a bit with the adjustable stock enough to know that I liked it a lot. For the price, this is definitely a bow worth considering. $299; pse-archery.com

The Lowdown: Mission’s Sub-1 was a big deal at last year’s ATA, and the new Sub-1XR is the follow-up model to that successful bow. At 410 fps, the XR is 35 fps quicker than its predecessor, but with an axle-to-axle length of just 9.1 inches, it’s more than an inch and half shorter. Also new is a new bushing housing on the limb bolts that makes backing out the limbs to work on the bow substantially easier.

First Look: Mission is the budget version of Mathews in the vertical bow category, but that all changes when it comes to crossbows. The Sub-1 XR will go toe-to-toe with anyone’s flagship, and it’s priced accordingly. At 410 fps, it has all the speed anyone needs, and I found the bow to be among the most balanced and easy to handle. The adjustable stock and cheek piece will no doubt contribute to the sort of accuracy hinted at in the product name “Sub-1.” I like the de-cocking system a lot, too, and the included scope is very good. $1,699; missioncrossbows.com 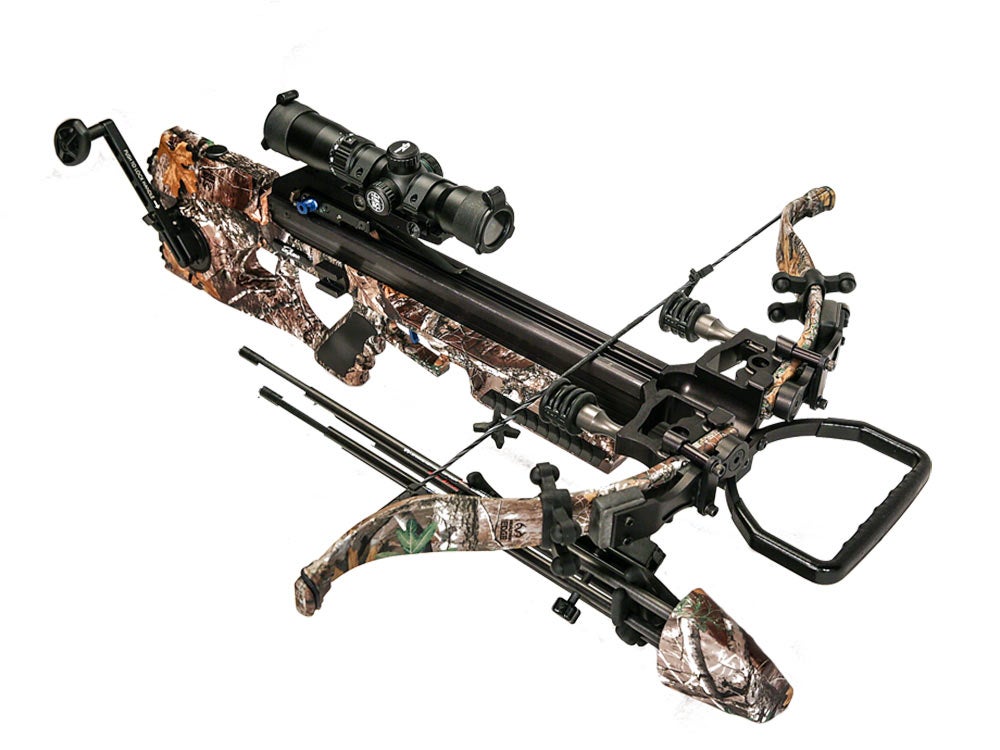 The Lowdown: The “TD” stands for “take-down.” You simply pull a button in the Quick Loc Technology™ housing at the end of the barrel, and the limbs pop off for easy storage and transport. When it’s time to hunt or shoot, they can be re-mounted just as easily without changing zero. Also new is the Tact 100™ scope with Fast Point 100™ illuminated multi-reticle.

First Look: The Assassin 360 was one of my personal favorites at last year’s ATA show, and the 420 TD is equally impressive. While I like the concept of take-down bows or crossbows, I’m always skeptical of the same-zero-after-reassembly claim, but the techs at the Excalibur shooting booth proved to me that the claim was true. I also loved the scope on this bow, and the trigger was among the best at the show. Equipped with Excalibur’s Charger™ cranking system, the 420 TD promises to be a fantastic hunting package for anyone who wants the simplicity, toughness, and reliability of a recurve crossbow. $1,899, excaliburcrossbow.com 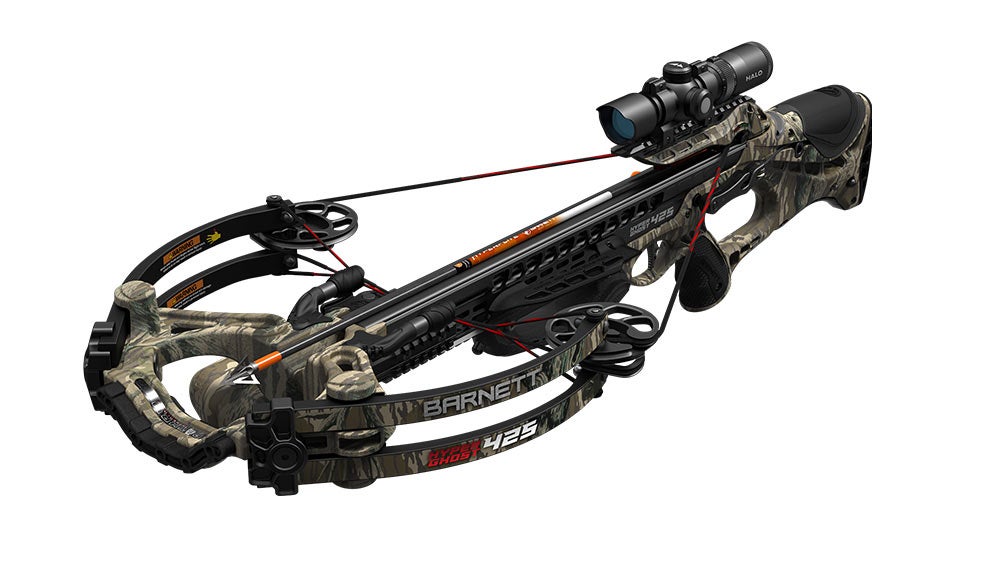 The Lowdown: In addition to the speed advertised in the title, the HyperGhost serves up features new to the Barnett line, like a CNC-machined aluminum flight track, a retractable underarm counterbalance support, a Soft Lok™ floating bristle arrow retainer, and an updated anti-dry fire TriggerTech™ assembly. Notable accessories include Barnett’s new, small-diameter (.204) Hyperflite™ arrows and a 1.5-5x32mm illuminated scope.

First Look: I shot several crossbows with more innovative tech and fancier features than the HyperGhost, but most of those were also burdened with a price tag that would make a banker blush. This bow is as fast or faster than most, and it features good balance and a fine trigger. If Barnett’s slim bolts offer the penetration they promise, this is a crossbow that will provides very solid performance at a fraction of some other flagship’s cost. $1,299; barnettcrossbows.com