When a tom gobbles in the spring, he can elicit three responses—and two of them are bad. Sure, he might... 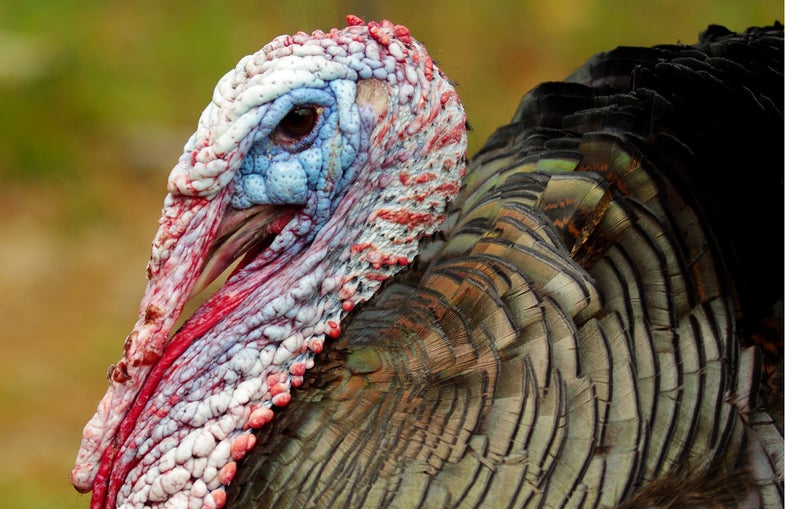 When a tom gobbles in the spring, he can elicit three responses—and two of them are bad. Sure, he might get the girl. But he might attract a load of 6s to the snood or a spur to the breast instead. With as many turkeys and turkey hunters as there are overflowing the spring woods, you can forgive the modern gobbler for feeling a touch of paranoia. What we see as a tranquil woodlot is, to the turkey, a minefield he must cross on his dangerous mission to perpetuate the species.

“Too many turkeys” is a good problem for a hunter to have, but as populations peak, turkey behavior changes. A few dominant toms do the majority of the breeding and gobbling, while birds that have lost territorial battles often remain silent for fear of another beating by a boss bird or a roving gang of jakes. Subordinate toms come to a call, but they often sneak in as quietly as possible. Turkeys react to other turkeys, at times, by avoiding them altogether or by skulking through the woods, hoping to hook up with a hen without bumping into a belligerent rival. Think of them as backdoor turkeys.

The presence of other hunters in the woods quiets turkeys even further. Turkey Hunter Nation now numbers about 2.6 million camo-clad citizens. Turn all of us loose to run around the woods for a month in the spring, and turkeys respond by becoming more cautious than ever before. They find hens by displaying and drumming without broadcasting their location.

Turkey behavior is changing, and hunters must adjust their tactics accordingly. Over the past few seasons I’ve doctored my game plan with the following five tactics. The quiet and unobtrusive approach works for me, and it will for you, too.

Twice last spring gobblers started across an open field to my calls, stopped, looked at my hen and jake decoys from 100 yards away, then turned and walked back into the woods. Did they bust my foam turkeys as fakes? Perhaps, but it’s equally possible both toms took the decoys at face value and decided they weren’t in the mood to confront another male turkey.

Unless a gobbler is the absolute king of the woods he can be leery of other birds, and that includes your decoys. After all, he’s been fighting for territory with other toms since before the season began, and he’s taken his share of lumps. Even bunches of jakes can thrash an adult tom. Boss gobblers will come aggressively to a decoy to run it off, but birds lower on the pecking order may shy away from what they believe are other real turkeys. And if you skip the jake decoy and set out a single hen, a gobbler may see it and hang up, expecting the hen to come to him.

When should you use decoys? If you know you’re hunting a dominant bird, a jake decoy can bring him running and purring angrily. Or if you’re in a blind where you need to position the bird in front of the win- dow for a shot, decoys can steer him onto the spot marked X. Otherwise, it’s often better to leave the decoy in the truck and make the turkey look for the source of your calling.

2. HUNT LATER IN THE DAY

The woods are full of hunters who stop off before work, hunt for a couple of hours, and go on about their business. I beat the crowds by sleeping in and getting to the woods at about 8:30, just as the first shift of hunters leaves for the day. As a bonus, gobblers that have spent the first hours of sunlight with hens are often on their own later in the morning.

That said, on the public lands where I hunt, I’ve had very little luck making midday turkeys gobble with cutts and crow calls. Pressured birds shock-gobble sometimes, but I’ve had much better success in these hours when I drive and glass, or get out of the car to sneak and peek along field edges and clearings. Once you spot a bird, slip into position to call. If you’re not seeing turkeys, go to a place you know they like and sit for an hour or two. Sitting isn’t as much fun as covering ground and cutting loudly, but in areas with lots of birds, you’ll often improve your chances by letting turkeys come to you instead of crashing through the woods trying to provoke a gobble.

We all like to make noise. Who doesn’t love yelping loudly right in the face of a turkey that double-gobbles back? Yet in timber that’s packed with turkeys, aggressive calling can backfire. Remember there are hens out there with pecking-order issues of their own. Hearing a loud interloper, hens sometimes lead gobblers in the opposite direction. Occasionally you can bait a boss hen into coming over to fight and bringing the gobbler in tow. More often, however, she’ll just stand her ground and talk trash.

Instead of picking a fight with the hens, try to set up in front of the birds and play the meek stranger, clucking and yelping softly and scratching leaves. Turkeys are curious and social creatures, and if you don’t sound too threatening, they’re likely to come see who you are.

Patience kills paranoid turkeys. Many a modern gobbler comes in silently. You have to believe that he has heard your calls and will eventually look for you. Keep in mind that he’s acting on turkey time, which has nothing to do with how fast a gobbler can walk from point A (where he is) to point B (where you are). Last spring, for instance, I spotted a pair of gobblers in a field and made a long detour to get around them. I set up at the edge of the stubble on the other side of a rise not far from where I’d seen them. One of the toms gobbled 50 yards away as I got into position. I figured that I’d be tagging him in five minutes. I called and sat. And sat. It took those two birds 45 minutes to close a gap they could have negotiated in 30 seconds. I wish I could tell you my patience was rewarded, but the turkeys slipped invisibly through the heavy underbrush in the woods without making a sound. They spotted me from a distance of 5 yards and ran.

Even pressured turkeys maintain a daily routine of sorts. Often, they’ll roost near or with hens and spend the first two hours or so of the day with their harems, at which time they’re very difficult to call. After they part company, many toms will make a circuit of strut zones—places where they can be seen, such as open fields and knobs in the timber. They’ll display silently, relying on their fans and drumming to attract hens. Some gobblers show up at the same strut zones with clockwork regularity. Beat them to the spot and stay alert; chances are, the bird will show up unannounced by gobbles. When you call at all, keep it quiet. There is only one time when being loud pays off with paranoid turkeys—when you slide off the safety and pull the trigger.