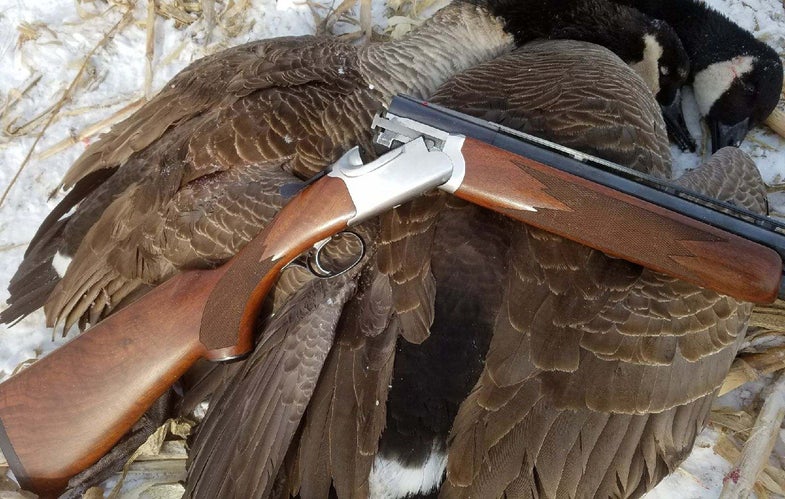 My Ruger Red Label and a couple of geese that fell on the last day of the season. By the author
SHARE

In general, three shots beat two chokes when it comes to waterfowl hunting. Occasionally, though, an o/u makes sense, as it did for me on the last day of goose season. It was cold—about 5 degrees with a 25 mph northwest wind—and I couldn’t find anyone who wanted to go. So I went by myself, because you always go on the last day. It’s one of my rules.

And, since it was cold, I brought an o/u, specifically, the Ruger Red Label I wrote about this past fall. Over/unders always go off, while semiautos can turn sluggish in the cold. Two certain shots beats three probable shots. And, while there are times you need three shots to complete a double (kind of like the old NBA “three to make two” free throw rule or occasions where the sequence goes miss, poor hit, clinching shot), most often the job is done with two shots or not at all. I do have one triple and one quintuple on my paltry list of lifetime achievements but I am happy with one, or sometimes two, birds at a time.

But, you say, pump guns always work and still give you three shots. True, but you only get three shots if you can put three shells in the gun. In my case, my fingers turn so numb on really harsh days that sometimes my thumb lacks the strength to push a shell into the magazine of a repeater. With an o/u, you pop it open, drop two shells in, close it, and you’re good to go, no matter how feeble your thumbs.

And, that second, tighter choke can come in handy, too, for making follow-up shots on flaring birds. Usually that shot is farther away than the first, and often the bird has turned and is going straight away, an angle that requires plenty of pattern density to make a clean shot. You can get the same effect by mixing loads in a pump or semiauto, of course, by shooting something that patterns more openly, like Winchester Xpert steel (in my experience), for the first shot, and backing it up with Black Cloud or Hevi-Shot. Ammo management can get a little tricky then, as you have to remember after you shoot which shell is now in the chamber.

While a pump or semiauto is still my first choice for waterfowl, there are days when the o/u makes the most sense, at least for me.